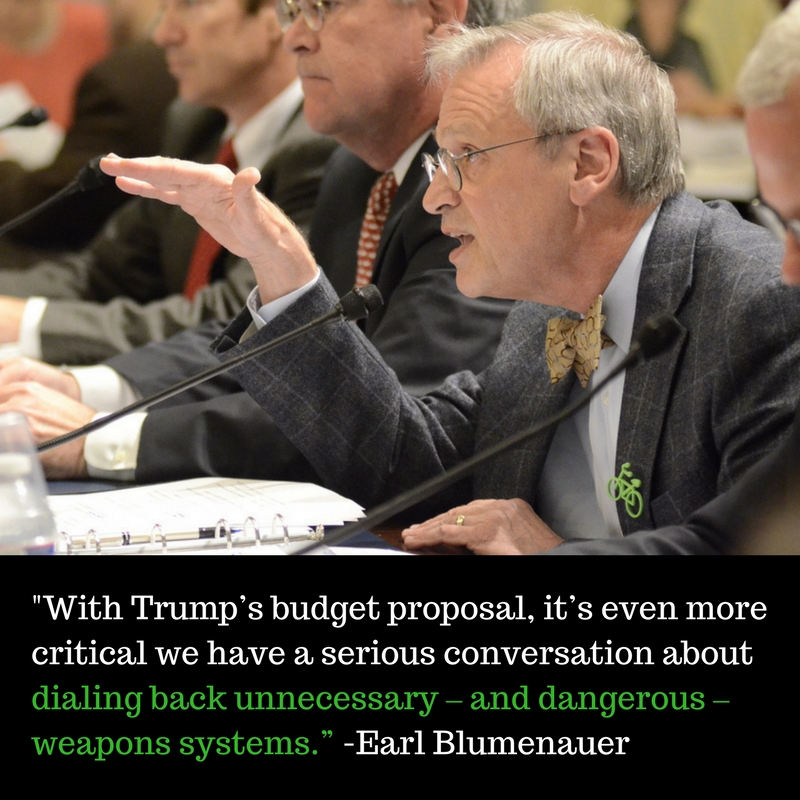 In stark contrast to Trump's disastrous budget proposal which increases spending for militarism and nuclear weapons at the expense of essential social and environmental protections, Oregon Congressman Earl Blumenauer and Massachusetts Senator Ed Markey today reintroduced the SANE Act which would slash nuclear weapons spending by $100 billion over the next decade.

The Smarter Approach to Nuclear Expenditures (SANE) Act improves national security and budgetary sanity by cutting redundant and destabilizing nuclear programs.  A copy of the SANE Act can be found HERE.

Now more than ever, it is critical that the rest of congress steps up to cosponsor this legislation and show its support for a budget that prioritizes human needs such as healthcare, a safe environment, jobs, education and foreign aid over wasteful spending on nuclear weapons.

Take Action: Let's get ALL of Oregon's delegation to support cutting funding for nuclear weapons! Call your Congressperson and Senators today and urge them to cosponsor the SANE Act or thank them if they are already on board.

Senator Wyden is not yet a cosponsor but has supported other nuclear weapons reduction measures in the past. Urge him to sign on. (202) 224-5244

Congressman Blumenauer has been the champion of this legislation in the house for the past several years. Thank him for his leadership. (202) 225-4811

Congresswoman Bonamici is an initial cosponsor. Thank her for her leadership. (202) 225-0855

Congressman Schrader has expressed interest but never supported the SANE Act. Now is the time for him to join his Oregon colleagues in supporting this common sense measure.(202) 225-5711

Congressman Walden has not yet supported the SANE Act. Now is the time for him to support this fiscally responsible legislation. (202) 225-6730

Outside of Oregon or not sure who your representative is? Find them here or call the capitol switchboard at (202) 224-3121 to be connected to your legislators.