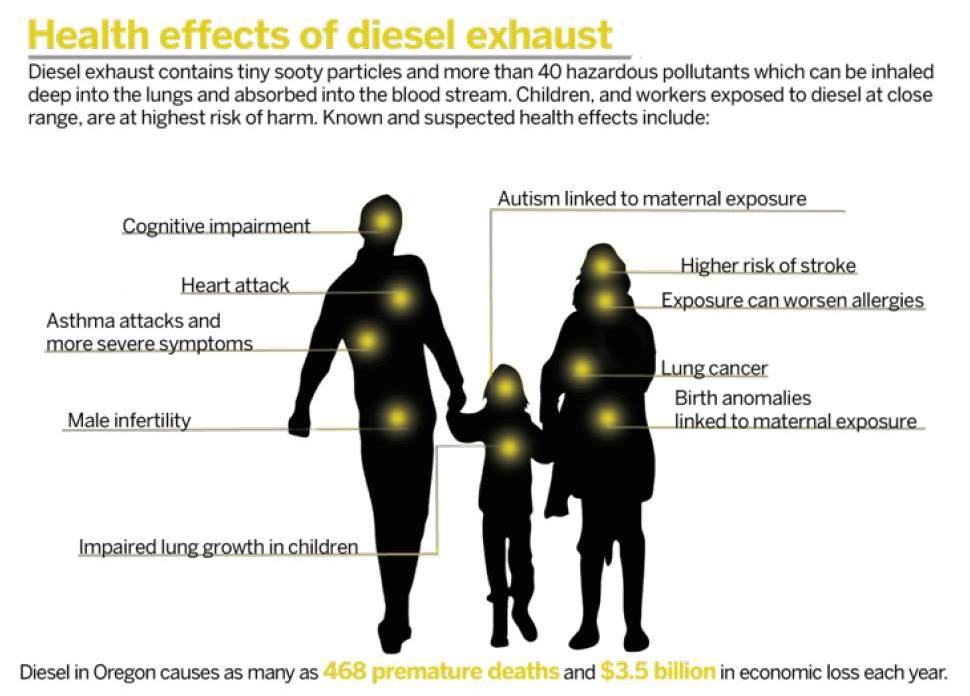 Think you are breathing clean air in Oregon? Think again! Thanks to dirty diesel, Oregon communities have some of worst air quality in the country. We have the opportunity to change this now by passing a strong version of  HB 2007, the “Diesel Bill,” which is up for a hearing next Tuesday, March 19th at 1:00 PM in the Energy and Environment Committee at the Oregon State Capitol in Salem.

The diesel burden falls most acutely on children, the elderly, and railroad, dock, trucking, and bus garage workers, as well as communities of color and low income communities that tend to live in high-traffic corridors.

Pollution from Oregon’s diesel emissions causes 460 premature deaths and 145 heart attacks each year, in addition to other serious health ailments that cumulatively cost the state more than $3 billion annually. Fortunately, adopting clean diesel standards has been shown to deliver $20 in public health benefit for every $1 invested in clean diesel technology. Passing a strong version of HB 2007 will bring this benefit to Oregonians.

Take Action: Can you join us at the hearing on Tuesday, March 19th at 1:00 PM? Email Damon to RSVP and for carpooling connections, and please wear white to support clean air.

If you can’t make it to Salem, you can still make your voice heard by submitting written testimony prior to the hearing. Here are instructions and talking points for your written testimony, which should be submitted before 11:00 AM on Tuesday, March 19th.

Oregon PSR is working closely with other members of the Oregon Just Transition Alliance and allies to support a strong bill that will protect public health from dirty diesel. Read more about what we like in the current version of HB 2007 and what amendments we are supporting to strengthen the bill’s ability to protect the health of Oregonians. For even more information, read Oregon PSR’s factsheet on diesel, small particulate matter, and public health.