This Must End: A Letter From a Colleague in Gaza 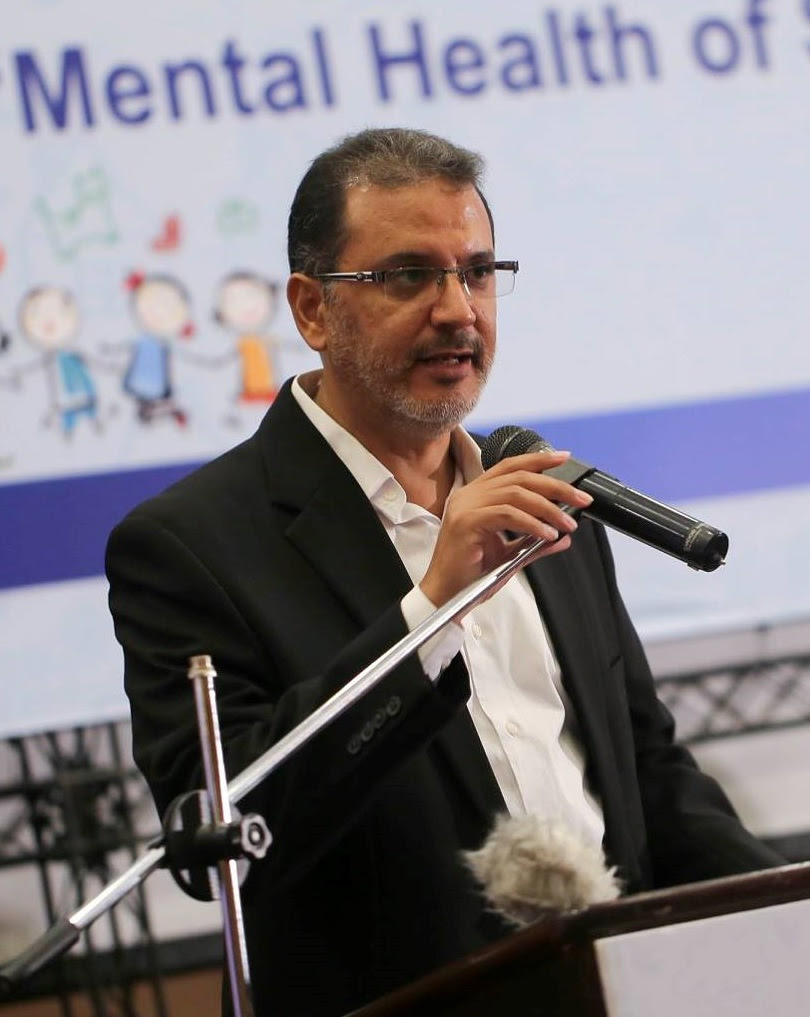 Dr. Yasser Abu Jamei (pictured above) is a dear friend and colleague in Gaza whom I met on a medical delegation to Gaza with Washington Physicians for Social Responsibility. He is psychiatrist and is the Director of Gaza Community Mental Health Program. You could not imagine a more gentle, thoughtful and lovely human being.

Our US  tax dollars ($3.8 billion each year) go to the Israeli military. This assault and all the horrors now being perpetuated by the Israeli military are happening on our dime. Please speak up if you are outraged and despair at this current intensification of the violence and the disregard for human rights and human life. -Maxine Fookson, RN, MN, Oregon PSR Board Member

I am writing this letter looking at my terrified 6-year old son, who keeps putting his hands over his ears trying block the sounds of Israel’s bombardment, my two daughters, aged 13 and 10 and my wife. These faces show the anxiety of not knowing where they can be safe now. My two older sons, 16 and 15, sit stunned and silent and I know they are reliving the memories of the previous three offensives on Gaza Strip and the family members we lost. These are the feelings that every family in the Gaza strip are living through.

We Palestinians have lived decades of humiliation, injustices, and maltreatment. In 1948, we were expelled from our land; over 600 villages were fully destroyed; hundreds of thousands of us were killed or uprooted. Nearly eight hundred thousand ended up living as refugees in different places around the globe.

This happened under the eyes of the International Community, who have promised us, a sovereign State over about one fifth of our original homeland. That decision was only accepted in the 1990s by Palestinians believing in a two-state solution.

Twenty-six years later, we look at the conditions in the promised State of Palestine and we see a West Bank divided and occupied by hundreds of thousands of settlers living in settlements built on the rubble of Palestinian homes, and who are making the lives of the Palestinian people living hell.

We see the Gaza Strip under blockade for more than 14 years, leaving us deprived of basic living conditions. Not only that, but having suffered three large offensives in this small area which killed, destroyed and traumatized thousands of our people.

And we see East Jerusalem, with its holiest sites for Muslims and Christians alike continuing to be under constant threat as settlers take over Palestinian homes and neighborhoods.

A week ago, Israeli settlers started to attack Sheikh Jarrah trying to seize more homes of Palestinian families. Everyone saw it. No one intervened.

In one of the holiest Ramadan evenings, Israel decided to evict tens of thousands of worshipers who were just praying at Al-Aqsa. These were mostly Palestinians who live in Palestine ‘48 – now Israel. Everyone saw the brutal use of military power by Israel. No one intervened.

The violent scenes in Sheikh Jarrah and the Al-Aqsa compound have lit a fire in Palestinian hearts not only in historic Palestine, but also everywhere in the world.

While we demonstrated in Akka, Jafa, Nazareth and the West Bank, rockets were fired from Gaza demanding an end to the atrocities in Jerusalem.

The Israeli army response was to attack Gaza with even more violence than in the terrible days of previous offensives. This time causing the deaths of more than 80 people including 17 children and 7 women. Bombardments hit tower blocks, apartments, governmental and police buildings and even whole streets. Everyone is seeing it. No one intervenes.

How long will the world just sit idly by while we here in Gaza suffer like this? The people of Gaza need more than just statements and resolutions, while Israel receives the arms which are killing and terrorizing us.

I am a father first and a psychiatrist second. My dream for my children to live, to grow, to learn, in safety. This is the same dream as that of every one of the clients I see. There will be more of them today, and tomorrow. It is my job to give hope. I will tell them what I tell my children and my wife. “Because this injustice for Palestinians has gone on for seven decades, that does not make it normal. The world is increasingly full of people who do not accept it is normal. There will be change.”

Concrete political action is needed NOW to end not only the current deathly bombing raids, but also this illegal occupation and siege of Gaza by Israel, immediately.

Our current living conditions under the siege are an affront to human dignity. I tell my children and my clients, “we Palestinians have the right to live as any other people in the world: to live in peace, in dignity and to enjoy our rights. It will come.”

The International Community MUST NOW fulfill its promise of a sovereign Palestinian state. Respect for international law demands every civilized country must recognize the State of Palestine now.

After more than seven decades now of occupation and misery, we remain resilient and will never give up. But there is no father who can bear to see his children live like this.

Life lacking a sense of safety: a Second Letter by Dr. Yasser Abu Jamai, May 16th, 2021

After Saturday’s bombing raids in the heart of Gaza City killing at least 43 people including 10 children and 16 women, Gazans are once again struggling with traumatic memories. The atrocities that are happening now bring memories. Israeli planes have shattered our families so many terrifying and memorable times for decades. For instance, over and over again for three weeks during Cast Lead in December 2008 and January 2009; seven weeks in July and August 2014.

Collapsed buildings’ blocks and gaping holes in Alwehdah Street where there was normal life a week ago are traumatic sights, triggering memories of those earlier atrocities.

Today there are hundreds of injured people to be cared for in our crowded hospitals which are desperately short of many supplies because of the years of Israeli siege. Huge efforts are ongoing by the community to search for people under the wreckage of the buildings.

Among the people who were killed: Dr. Moen Al-Aloul, a retired psychiatrist who treated thousands of Gazans at the Ministry of Health; Mrs Raja’ Abu-Alouf a devoted psychologist who was killed together with her husband and children; Dr Ayman Abu Al-Ouf, with his wife and two children, an internal medicine consultant who was leading the team treating patients with COVID at Shifa hospital.

Memories of every previous trauma are impossible to forget because all of us in Gaza always live lacking a sense of safety. The Israeli drones have never left the sky over us between 2014 and 2021. Shelling continued to happen during random nights. Although the shelling was infrequent, it was enough every time to remind us all of what we have been exposed to and will be again.

The weekend’s attack took place without any warning. It's yet another massacre. Just an evening earlier ten people were killed including eight children and two women. One family of seven was wiped out except for just the father and a three month old baby. The father lived because he was not at home, and the baby was saved after being found under the wreckage, protected by his mother's body.

These are not new scenes for Gazans, unfortunately. This is something that keeps happening throughout these offensives. During the 2014 offensive it was reported that 80 families were killed with no one left alive, just removing them from the records. In 2014 in one single attack, Israel destroyed a three story building that belong to my extended family, killing 27 people including 17 children and three pregnant women. Four families were simply not there anymore. A father, and a four year old son were the only survivors.

Now the news and fears of a possible land invasion are overwhelming us with yet other devastating memories as we confront each new horror.

One barbaric attack has included 160 jetfighters attacking for over 40 minutes in the very northern areas of the Gaza Strip, accompanied by artillery shelling (500 shells) that hit the eastern side of Gaza City and northern areas. Many houses were destroyed, though most of the people were able to escape from their homes. It is estimated that as many as 40,000 people have headed yet again to UNRWA schools or to relatives, seeking shelter.

To most Gazans, this is a reminder of the first attack in 2008. It was Saturday 11.22 am when 60 jetfighters started bombing the Gaza Strip terrorizing everyone. At that moment, most school children were in the streets either returning from the morning shift or going to the afternoon shift. While children started running, terrified, in the streets, their parents at home were distraught not knowing what had happened to their children.

Families being displaced now is a painful reminder of the huge displacement of 2014 when 500,000 people were internally displaced. And when the ceasefire came, 108,000 could not return to their destroyed homes.

People have now to deal with triggers to all these previous traumatic events, and more. This makes natural healing processes more complicated and in some cases it causes a relapse of symptoms. We always try to explain that Gazans are not in a post-traumatic condition, but in an ongoing condition that needs deeper attention.

Many people in our community have been calling us in the clinic from day one. Some were people working in hospitals, or in the NGO sector. Some appealed through our Facebook page asking about GCMHP services as they see traumatized people on every side, and feel a desperate need for our services.

Our staff are part of the community. Some of them had to leave their homes. They need to feel safety and be secure in order to help others. But still, without that safety they are still devoted to the organization and to the community. They feel a great responsibility for their vital role supporting the psychological wellbeing of Gazans. They are totally and tirelessly available.

Over the weekend we made public the mobile numbers of most of our technical staff. On Sunday our toll free line resumed operating, and from 8 am to 8 pm it will be ringing these days. Our FB page started to raise awareness for parents on how to help deal with children and stress. It is true that we have not had the chance to prepare new material, but our library is a very rich one with our products and it's time to harvest the wisdom and support in our YouTube library. Perhaps this is not our best intervention, but definitely it is the most that we can do in these circumstances to provide Gazans with strength and skills in coping inside their terrified families.

As of Sunday evening, 197 people have already been killed, including 58 children, 34 women, 15 elderly people and 1,235 are injured. As a psychiatrist I can say that the invisible psychological toll on everyone from the youngest to the oldest is acute – from fear and stress. It is a moral imperative for the world to look straight at us, see us, and commit to intervention to save Gazans’ valuable creative lives by giving them the sense of safety every human needs.