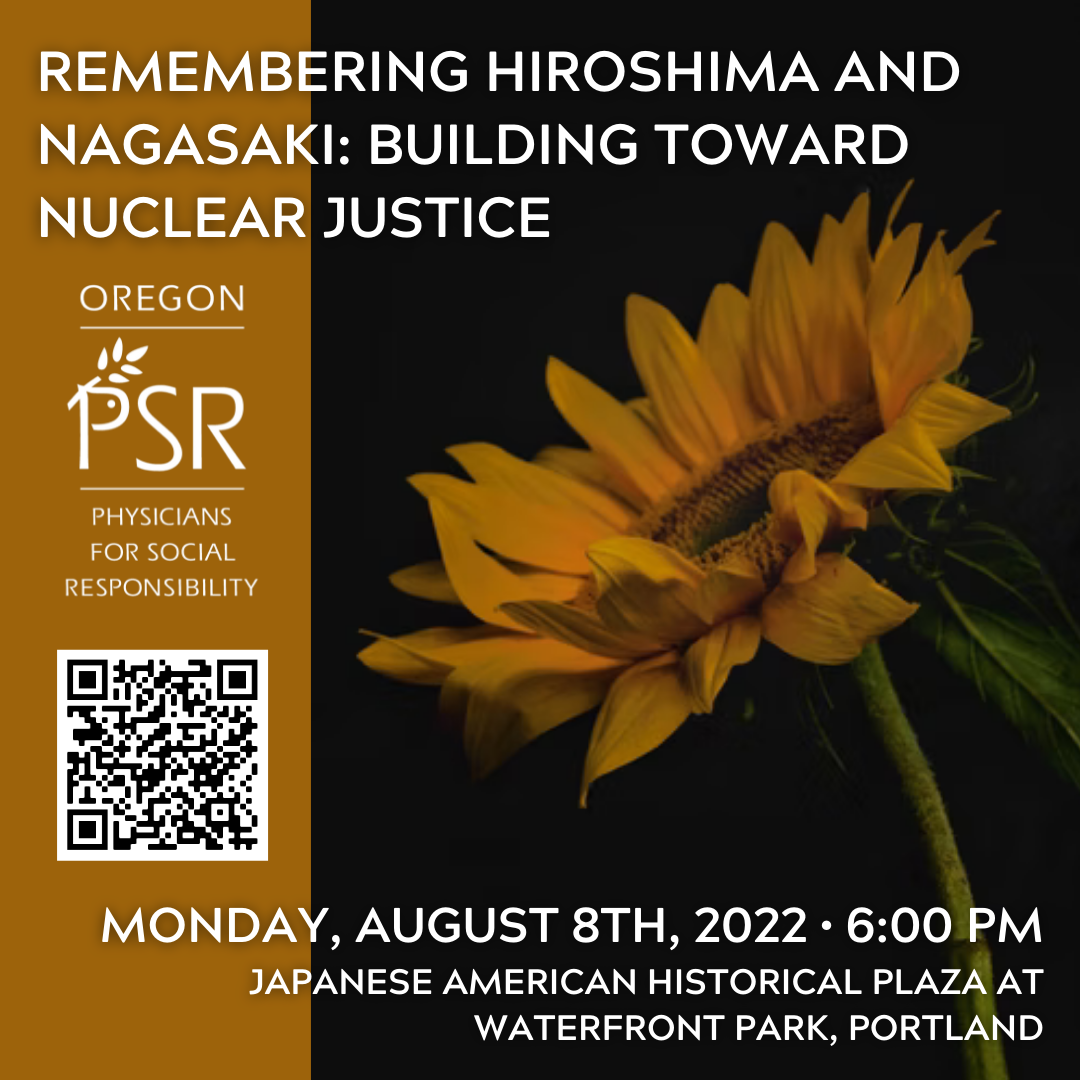 On Monday, August 8th, 6:00 PM (PST), we hope that you will join Oregon PSR and our community partners for the annual Portland-area memorial to the victims of the atomic bombings of Hiroshima and Nagasaki. We're excited to be returning to an in-person event after virtual events for the past few years as a result of the COVID-19 pandemic, and will be hosting the event at the Japanese American Historical Plaza at NW Naito Parkway and Couch Street on the Portland waterfront.

As the war in Ukraine reminds us, the existence of nuclear weapons remains a threat to all life on our planet. While 90% of the world’s nuclear weapons remain controlled by the US and Russia, momentum is growing for a nuclear-free future as the  majority of countries in the world have come together to create the Treaty on the Prohibition of Nuclear Weapons, making nuclear weapons illegal under international law. The first meeting of State Parties of the Treaty recently concluded, with even some NATO-member countries surprising the world by attending.

We here in the US must do our part to work for a nuclear-free future. We invite you to be a part of this year’s memorial event, which will feature the voices of communities most impacted by nuclear injustice and make clear the links to movements for racial, environmental, and social justice.

We are thrilled to announce a truly stellar lineup of performances this year including LaRhonda Steele and the Grace Gospel Quartet; Portland Taiko drummers; Tsubaki Buyo Doukoukai traditional Japanese dancers; a Marshallese youth dance troupe; and a sing-along with Hiru Gohan Group.

Our speakers will include longtime nuclear justice activist and Walla Walla Tribal Member Cathy Sampson-Kruse and third generation hibakusha (atomic bomb survivor) and artist Yukiyo Kawano. We’ll also honor two movement elders, hibakusha Michiko Kornhauser and atomic veteran Harvey Thorstad, with a special award. The event will be hosted by Jess Gasper of the Oregon Marshallese Community Association. We’ll pause to mark the exact moment (7:02 PM) when the bomb made with plutonium processed at the Hanford Nuclear Reservation on the Columbia River was dropped on Nagasaki and we’ll provide opportunities for our audience members to take action for nuclear justice.

Show your support for nuclear justice with a donation to support this important work today.

Thank you to all of our event cosponsors who make this memorial possible:

Coalition of Communities of Color

Health Care for All Oregon

Special thanks to our Media Sponsor, KBOO Public Radio.