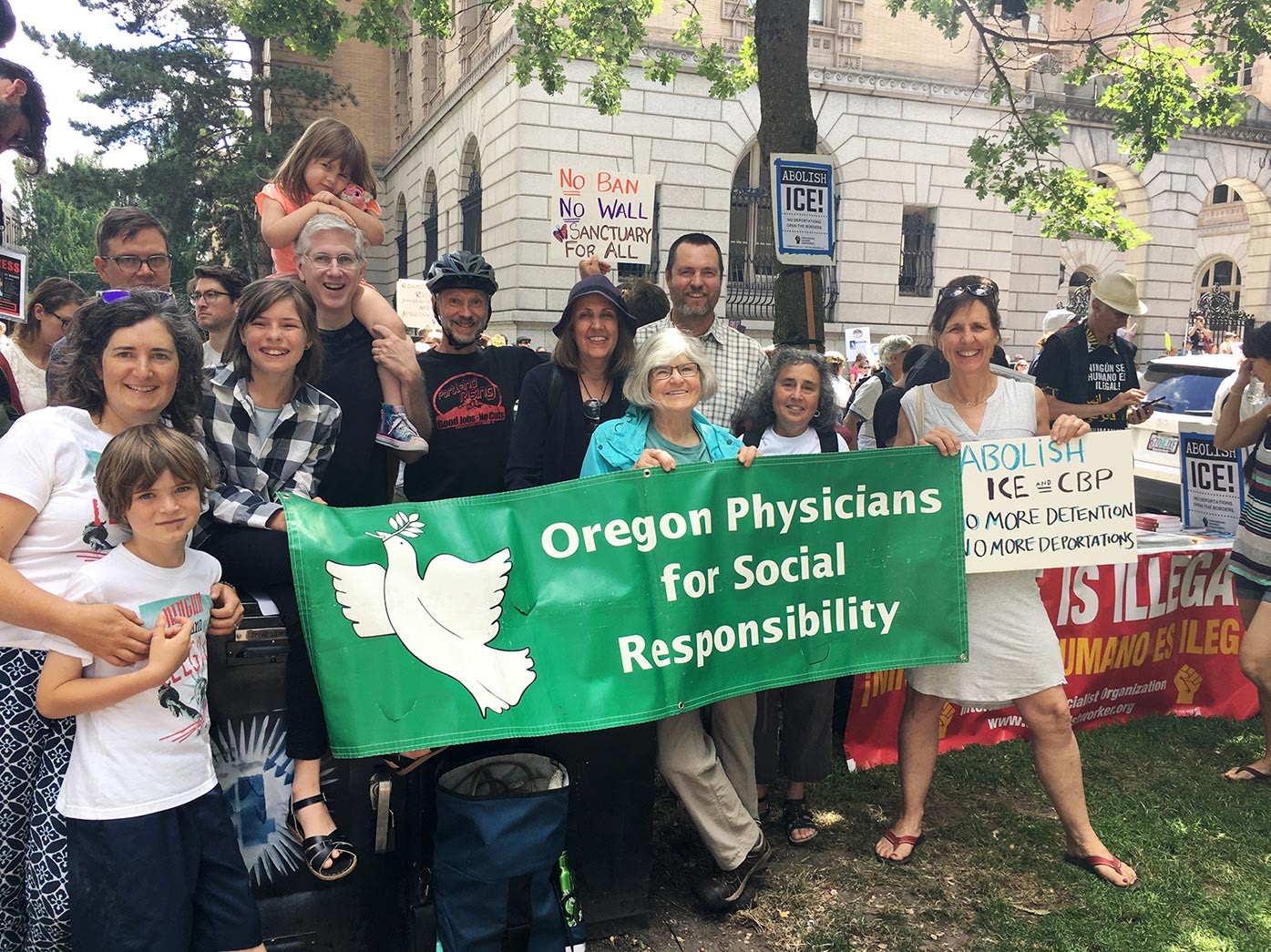 An Ethical Call from Health Workers Opposing Unjust US Immigration Policies: From the US/Mexico Border to the Muslim Travel Ban

“It ultimately became clear to me that, unless I made a stand and did something about the plight of the detainees, I would be compromising my moral beliefs and my perception of my professional responsibility. My conscience told me that I could no longer stand by and do nothing…. I respectfully submit that this application is very urgent. The police are apparently engaged in a pattern of daily assaults upon detainees. For every day that goes by those apparently unrestrained assaults continue.” Dr Wendy Orr, (on her responsibility to testify against torture in Apartheid South Africa)

Like Dr. Orr in apartheid South Africa, Oregon Physicians for Social Responsibility (PSR) acknowledges our moral responsibility in response to US immigration policy and the Supreme Court’s decision to uphold the Muslim Travel Ban. Today we are compelled to speak out against the trauma and life-long injuries being inflicted upon immigrants fleeing their countries for fear of religious or other persecution, war, racism, fear of violence, extreme poverty, climate change, medical need, or seeking to reunite with family members who are here in the US. Our government’s immigration policies enacted over the past weeks--the “zero tolerance”policy, the heartless separation of children from their parents, and the Supreme Court’s upholding of Trump’s “Muslim travel ban” are diametrically opposed to all values we hold as health professionals, as Americans, and as human beings.

Using our voices as healers, we call on our Oregon Congressional delegation to act in the following ways:

We want to commend Senators Merkley and Wyden and Representatives Bonamici and Blumenauer for their vocal calls and actions to lift up these urgent issues and to stop these reprehensible policies. We urge you to continue your courageous work and also urge all members of the Oregon congressional delegation to join with you in your calls/actions for justice and dignity for immigrant families.

We do our work in various disciplines of the health field from an ethical conviction to  mitigate the causes of human suffering. Our work does not stop at the doors of our clinics, hospitals, schools, or offices--we recognize that we must use our voices, which come from our education, research, practice and human experience to speak out against the violations of human rights and dignity that are occurring as a result of the current Administration’s immigration policies. These are clearly issues that affect physical and mental health.

At the US/Mexico Border

Over the past weeks, we have heard news reports with the sounds of children crying for their parents from whom they had been forcibly separated by US Border Patrol agents. We have seen the pictures of the “dog cages” in which these children are being imprisoned. We have heard the anguishing stories of immigrant parents who have no idea where their child is held, nor if they will ever see them again. And, we saw Trump's callous Executive Order on June 20th that allegedly would cease family separations, while failing to identify a means to reunite families - replacing family separation with family incarceration. Military bases will become family internment centers. Immigrants with legitimate claims to asylum are not getting due process to exercise that right. Immigrants and their children in detention are receiving abusive and unsafe care and denied prompt care for health conditions and they are being denied spiritual counsel from clergy. Recognition of the right to seek safety from persecution and danger is a cornerstone of our democracy, is protected by international law such as the United Nations Declaration of Human Rights, and is part of our responsibility to the global community.

Whether the separation of children from their parents or incarceration of families, these policies are counter to all that is known about the negative impact of trauma on children. More than fifty years of research on attachment has supported professionals’ anecdotal knowledge that to take a child from a parent is an act of trauma that affects a child's emotional and cognitive health immediately and over the child’s lifetime. Separation from a parent or caregiver is “one of the most potent traumatic stressors a child can experience, especially under frightening, sudden, chaotic, or prolonged circumstances.”

On June 26th, the US Supreme Court voted 5 to 4 to uphold the travel ban that was imposed by Trump in December 2017. The ban denies visas to individuals from seven countries--five of them having a primarily Muslim population. This ban must be seen for what it is - the fulfillment of a campaign promise to fringe racist and Islamophobic groups. There is no basis for the restrictions other than targeting and discrimination. Individuals and families in Syria and Yemen face huge humanitarian crises due to war, climate change, poverty and disease, and yet people from these countries are categorically banned from entry into the United States. It was shocking and dismaying that the Supreme Court ignored the facts provided in legal arguments showing that the ban has nothing to do with national interests, but rather is a racist policy that targets Muslims.

Supreme Court Justice Sonia Sotomayor described the ban in her dissenting opinion calling it “harrowing”. She said it was “motivated by hostility and animus toward the Muslim faith.” She also said the decision to uphold the ban involved “ignoring the facts, misconstruing our legal precedent and turning a blind eye to the pain and suffering the proclamation inflicts upon countless families and individuals, many of whom are United States citizens.” Supreme Court decisions such as upholding slavery and the internment of Japanese-Americans show that the Supreme Court has in the past been complicit with such racist and undemocratic processes. We ask ourselves, what kind of nation have we become that we cannot live up to the words on the Statue of Liberty, “...Send these, the homeless, tempest-tossed to me, I lift my lamp beside the golden door!”