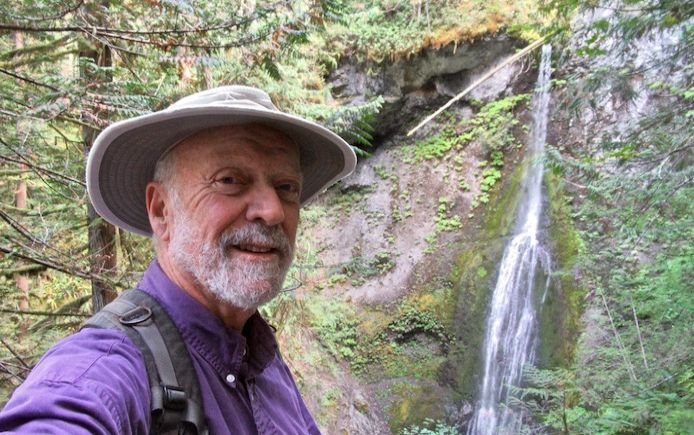 I am devastated to share the news that Oregon PSR Board Member, David Chatfield, has passed away. David was a mentor and a friend for nearly my whole adult life. He joined the Oregon PSR board when he moved to Portland in 2016 and brought an impressive lifetime of activism for justice and career in nonprofit management to strengthen our organization.

David was often found doing the hard work behind the scenes to make Oregon PSR function. From serving on our Board finance committee to drafting our Equity and Justice Statement to carrying one side of our unwieldy banner at a march, David was quietly building power for Oregon PSR and movements we participate in. He was brilliant, kind, and humble. Read on for a beautiful remembrance of David's remarkable life by the current co-directors of Californians for Pesticide Reform, where David served as the founding Executive Director.

David's wife, Jo Ann, has asked the donations in his honor be directed to the three organizations he was most involved with recently: Pesticide Action Network and Oregon PSR whose boards he served on, and Southern Utah Wilderness Alliance.

Join Zoom call here: Click the link below or paste into a web browser - Please note: you will need to enter the Passcode. It is: 12345.

Remembrance by Co-directors of Californians for Pesticide Reform:

It is with heavy hearts that we write today to let you know that we lost our founding director and cherished friend and mentor, David Chatfield on December 4. David served as Executive Director of Californians for Pesticide Reform from 1997-2011, helping shape the coalition from its very beginnings, and turning it into a model of non-profit cooperation and transparency that inspires collective movement work in California and across the United States to this day.

A dedicated activist his entire life, David is remembered and cherished for the incredible change he helped bring to the pesticide movement in California, including passage of the landmark Healthy Schools Act, the Healthy Day Care Act, the Pesticide Drift Exposure Response Act and the Toxic Air Contaminant Timeline Act. During his tenure CPR sued the Department of Pesticide Regulation to limit pesticide-related air pollution and won pesticide buffer zones around schools, homes and labor camps in a number of San Joaquin Valley Counties, ultimately leading to the most comprehensive school and day care pesticide-free buffer zone regulation in the U.S. From the get-go his work at CPR was characterized by a deep commitment to ensuring leadership from those most directly affected by pesticides in California.

At the same time, David did it all with a twinkle in his eye and joy in his heart, never forgetting the importance of fun and inspiration. He was always ready to grab a pint after the day’s struggles, and his Aloha Fridays at CPR were a reminder to celebrate while doing the hard work.

Prior to his work with CPR, David worked with the UFW and American Friends Service Committee in the 1970s and then as International Director of Friends of the Earth from 1977 to 1985. David worked for Greenpeace for ten years, primarily as the Pacific Southwest Regional Director, but also as International Pesticide Coordinator, and, for two years, Chair of the Greenpeace national board of directors. He also served as California Director of Clean Water Action. Throughout the years he participated in many direct actions, including living for a period of days in a large metal box bolted to a railroad track with another Greenpeace colleague. Together with other Greenpeace allies they successfully forced a blocked Dupont facility - producer of chlorofluorocarbons (CFCs), an ozone depleting greenhouse gas that contributed to the deterioration of the ozone hole and to the escalation of climate change - to meet with Greenpeace and stop production of CFCs.

David shared his wisdom and expertise in other ways as well, serving as a board member for many different non-profits. He was a long-time board member of the national Greenpeace Fund Board, and served on the boards of California Sustainable Agriculture Working Group, the Earthshare of California Board, Global Greengrants Fund, California-based Greenaction and most recently Oregon Physicians for Social Responsibility and Pesticide Action Network. He also served on advisory committees for the Political Ecology Group and the League of Conservation Voters in California. He graduated from Occidental College (Los Angeles) with a BA in International Relations.

David was an extraordinary person who inspired many, many souls both in his professional and personal life. He modeled how to work together strategically and compassionately, in solidarity, to build community, towards a common goal. He was open, supportive, strategic, and always ready to learn and listen and offer thoughtful, practical advice. He quietly mentored many young leaders, helping them find their own voice and strengths, and facilitating the evolution of many organizations. He was a truly kind, creative, thoughtful, brilliant person who helped drive so much important change, and he never wavered from the task of challenging injustice, even while he did it with a sparkle in his eye and a full appreciation and love of life.

Although David could be remembered and beloved just for his professional accomplishments, what people truly remember him for was his warmth, humor, kindness, joy, sense of fun, fierce commitment to justice, no-nonsense truth-telling and the generosity of spirit he brought into every room and relationship. He was a kind and gentle soul, a man of deep integrity.

To say that David left behind many loved ones is an understatement. David and his wife Jo Ann cultivated deep friendships throughout the United States and world, easily making new friends wherever their travels took them. They shared a deep love for family and friends and became cherished favorite family members for many, related or not. They left an indelible influence on many young people, personally and professionally.

David was an avid fan of baseball, bottle caps, history, music and art. He was also a gifted writer, photographer, and storyteller, and kept a wide fan base updated on his “blog/bletter,” sharing his many adventures with his beloved wife Jo, whether traveling across the country to visit friends and family, exploring regional history and obscure sites, or living their life at home in Portland. His blog became a travel tipster for many - which historical sites were worth visiting, which places to skip, and most importantly, the best microbreweries. Through it all he and Jo maintained an extraordinary love for one another that was obvious to all who were lucky enough to witness such a special relationship.

Diagnosed with pulmonary fibrosis earlier this year, David was still very active up until his hospital admission a week before he died. He remained very engaged with family, friends and activism to the end, even traveling with Jo this summer to the east coast to officiate their niece’s wedding and visit friends and family.

Words are insufficient to capture a glimpse of such a beautiful soul. But maybe the most notable characteristic of David is that he made everyone lucky enough to spend time with him better, more compassionate and kinder human beings. David’s memory and spirit will live on through all those he touched, and he will be greatly missed.

PS Here's a 2019 interview of David by Pesticide Action Network, on whose board of directors he served.