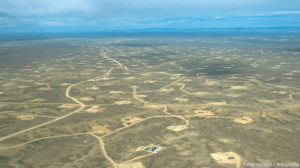 Physicians for Social Responsibility and fellow plaintiffs just won a landmark victory for climate and health as a federal judge rejected the leasing of public lands for fracking and ordered a halt to drilling on more than 300,000 acres in Wyoming.

While the ruling applies to Wyoming, the precedent implicates oil and gas leases on public lands across the American West and is a major rebuke to the Trump administration’s anti-environment, anti-climate agenda.

PSR, WildEarth Guardians, and the Western Environmental Law Center sued the US Department of the Interior and the Department’s Bureau of Land Management in 2016 for failing to account for the climate consequences of leasing public lands for fracking.

The suit targeted more than 460,000 acres of public lands in Colorado, Utah, and Wyoming where leases were sold to the oil and gas industry in 2015 and 2016. When making those sales, the Bureau of Land Management refused to calculate and limit the greenhouse gas emissions from future oil and gas development.

Must quantify the climate change impacts

During the case, the judge decided to address 303,000 acres of leases in Wyoming first.  However, his decision has much broader implications for public lands.

Fossil fuels produced from public lands are estimated to account for nearly 25% of all U.S. greenhouse gas emissions, making them a major contributor to climate change.

“This decision is a solid win for health and for climate,” said Barbara Gottlieb, PSR’s director of Environment and Health, in responding to the court’s decision. “Fracking is dangerous to people living near that infrastructure, and destructive of a livable climate for all of us.

“We can’t keep disregarding the harm that comes from extracting and burning oil and gas. We already face a climate health emergency. The impacts are just too great.”

Among the news coverage of the ruling: