Rally to Protect Portlanders from Racial Profiling and Surveillance 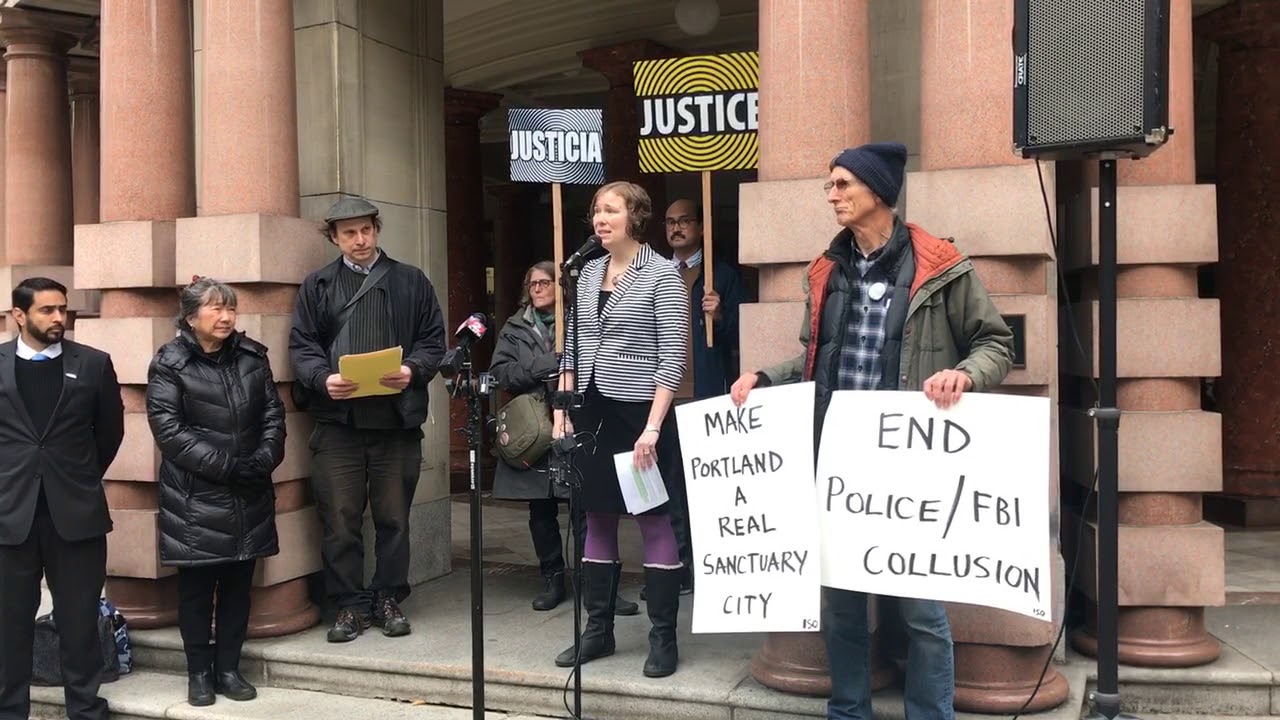 Join us on Wednesday, February 13th at Portland City Hall for a rally and vote to withdraw Portland from the JTTF.

Since 2017, Oregon PSR has been working with many other organizations on a campaign to end Portland’s cooperation with the FBI’s Joint Terrorism Task Force (JTTF).  The JTTF is a program of cooperation between local law enforcement and federal law enforcement agencies such as the FBI, Immigration and Customs Enforcement (ICE), and others.

Allegedly, the JTTF collaboration is aimed at improving community safety and security. However, human and legal rights groups such as the ACLU assert that JTTF collaboration does nothing to improve overall community safety and, in fact, by profiling and targeting vulnerable communities, it makes individuals feel less safe to report crimes or concerns. Ending cooperation with the JTTF does not mean that the Portland police can never work with the FBI. Rather, collaboration would occur on a case-by-case basis when there is actual criminal activity suspected. Several statements about the concerns about JTTF can be found here and here.

The practices of the JTTF rely on racial profiling and surveillance based on a person’s religion, nation of origin, and political views. Muslims, immigrants, communities of color, and protesters tend to be the targets of this activity. This deliberate targeting very likely violates Oregon’s law against profiling (HB 2002 (2015), now ORS 131.920). Since the events of 9/11, JTTFs have ramped up their surveillance practices in many cities. Concerns about this intensified surveillance have only increased with the current administration’s xenophobic and racist rhetoric and actions.

Why the JTTF is of concern to healthcare workers

The federal agencies involved in the JTTF are all part of the increasing militarization of our systems of law enforcement. We know that such systems profile and target the most vulnerable in our communities, such as people of color, immigrants, and LGBTQ+ people. Militarized, secretive policing creates a climate of fear in our communities and thus makes us all less safe and less healthy.

The American Public Health Association, in its call for health equity, recently called for an end to policing violence. They stated that “We know that that fear environment influences our children, their health and well-being, influences their mental health, influences their actual growth. It results in early childhood trauma for those children who live in these communities in which people are afraid, so it's a big issue.” Collaborations such as the JTTF add to this climate of fear through secretive policing. Fear of targeting and surveillance fosters stress and trauma, which in turn cause or exacerbate a variety of health problems. Oregon PSR, along with other public health and human rights groups, believes that policing should be based on openness and transparency, community involvement, cultural competency, and restorative practices. In order to achieve this, Portland must end cooperation with the JTTF.

Oregon PSR joins with other organizations (see below for a full list) to call on Portland City Council to end cooperation with the JTTF to protect the civil liberties of all Oregonians.

Organizations and individuals who signed on to a letter in opposition of cooperation with the JTTF include: