Nuclear Conflict: The Growing Threat and a Call to Action 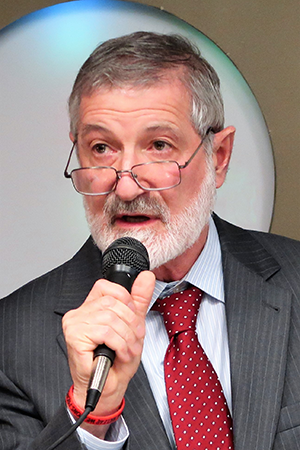 The Osher Lifelong Learning Institute at the University of Oregon (OLLI-UO) is pleased to announce a timely virtual lecture with two-time Nobel Peace Laureate Ira Helfand, MD (pictured here), a member of National PSR's Board of Directors, co-chair of PSR’s Nuclear Weapons Abolition Committee, and co-president of International Physicians for the Prevention of Nuclear War (IPPNW).

This presentation is free and open to the public. Limited seats are available and registration is required. Please note: The Zoom webinar link will be sent out the morning of the lecture (October 12th), so please be sure to register in advance.

For questions about this specific event, please email OLLI-UO.

Learn more and register to attend this event.

He represented ICAN at the Oslo and Nayarit Conferences on the Humanitarian Impact of Nuclear War, and in September of 2015, he addressed a special session of the United Nations General Assembly. In May of 2016, he led the session on the humanitarian consequences of nuclear war at the United Nations Open Ended Working Group meeting in Geneva that led to the successful negotiation of the Treaty on the Prohibition of Nuclear Weapons in the summer of 2017, and on September 20th of 2017, he represented IPPNW at the signing ceremony for the Treaty.

Dr. Helfand co-authored PSR’s report Nuclear Famine: 2 Billion at Risk?, which outlines the global health consequences of regional nuclear war. He was a leading medical voice in ICAN’s campaign for the Treaty on the Prohibition of Nuclear Weapons. He has published studies on the medical consequences of nuclear war in the New England Journal of Medicine, the British Medical Journal, the Lancet and the World Medical Journal, and has lectured widely in the United States, and in India, China, Japan, Korea, Russia, South Africa, Israel, Pakistan, Mexico, Brazil, Columbia, and throughout Europe on the health effects of nuclear weapons.

He is a former chairman of the Department of Emergency Medicine and President of the Medical Staff at Cooley Dickinson Hospital, and currently practices as an internist and urgent care physician at Family Care Medical Center in Springfield, Massachusetts. He is the recipient of the 1997-1998 Will L. Judy Award, the 2003 O’Dwyer Award, the 2003 John Phillips Award, the 2016 Verdoorn Prize, the 2017 Distinguished Peace Leadership Award, and the 2017 Edward Barsky Award of the American Public Health Association.