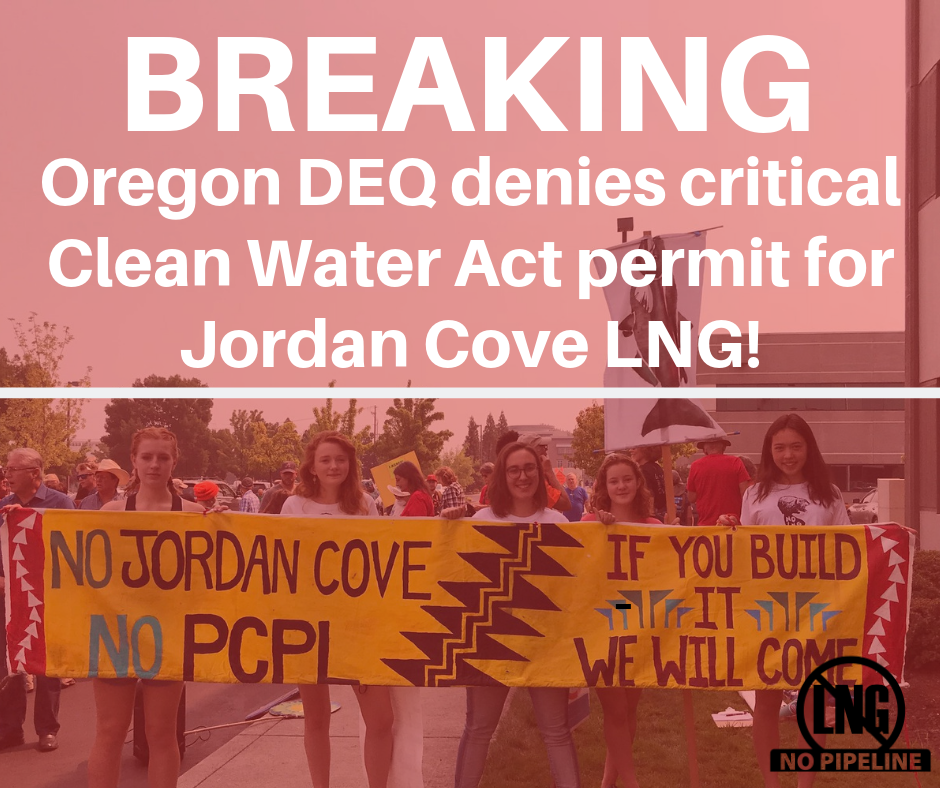 On May 6th, the Oregon Department of Environmental Quality (DEQ) today delivered a potentially fatal blow to the Jordan Cove LNG project and the Pacific Connector fracked gas pipeline which has faced fierce opposition for more than a decade by a grassroots coalition of impacted landowners, anglers, small business owners, tribal members, health professionals, and many more Oregonians and Northern Californians.

In the action, Oregon DEQ denied the Clean Water Act Section 401 permit because the massive LNG export terminal and pipeline could not demonstrate that they would meet Oregon's clean water standards. Jordan Cove LNG and the Pacific Connector Pipeline cannot be built without the state permit. With their denial, DEQ released 200 pages of detailed findings about how the project does not meet Oregon’s water quality standards.

DEQ notes that “DEQ does not have a reasonable assurance that the construction and authorization of the project will comply with applicable Oregon water quality standards.”

This decision follows a record-breaking public comment period that closed last August in which 42,000 people submitted comments raising concerns about the impact the Jordan Cove LNG project would have on fishing, recreation, public drinking water, and the economy of southern Oregon.

“Oregon’s decision shows that when we come together and speak out, we can win,” said Hannah Sohl, Director of Rogue Climate, one of the organizations involved in a broad coalition opposing the LNG project. “For years, a record number of Oregonians have urged Gov. Brown and Oregon agencies to put the public interest over the special interests of Canadian fossil fuel corporation Pembina. It is great to see Oregon DEQ do just that. Oregon should be focused on creating good-paying jobs in renewable energy, not on new fossil fuel projects that hurt us all.”

“Today’s denial is great news for our Klamath Tribal members and other Oregon citizens that have been concerned about protecting  fisheries and Oregon’s waters. The impact this project would have on our waterways is only one of many reasons the Jordan Cove LNG project should be stopped for good,” said Chairman Don Gentry of the Klamath Tribes. “The Klamath Tribes are very encouraged that the state of Oregon is making this move to protect clean water, cultural resources, and our traditional territory.”

"For 15 years, we have known that this project would harm our local Coos Bay area - threatening our public safety, our estuary, and our fishing," said Jody McCaffree, a Coos Bay activist who has fought the Jordan Cove LNG since first learning about it 15 years ago. "I am so relieved to see the State of Oregon take this stand for a healthy Coos Bay community and clean water in our state. We will remain vigilant until this project is dead and gone."

“Today’s decision shows that the state of Oregon is standing up for our clean water and our communities,” said Stacey Detwiler of Rogue Riverkeeper. “Despite efforts from the Trump administration to weaken the Clean Water Act, this decision reflects the threat to our waters from the project and the impact of overwhelming public opposition.”

This decision comes on the heels of Pembina announcing last week that they are cutting their projected spending for 2019 in half and are delaying the proposed launch date of the export facility by a year as they wait for state and federal regulators to make decisions on project permits.

Other permitting periods like the Federal Energy Regulatory Commission’s Draft Environmental Impact Statement (DEIS) are still moving forward. The comment period on the DEIS is open until July 5th, and hearings are expected to take place across southern Oregon in late June. However, the project cannot be built without the Clean Water Act permit.

“We are pleased Oregon DEQ followed the law and the science. DEQ concluded the risks to our water, wildlife, and communities were simply too great to allow this project to go forward," said Andrew Hawley, staff attorney for the Western Environmental Law Center. "This decision shows that the Clean Water Act still works in Oregon to protect our citizens, our rivers, and our fish.”

“Today’s DEQ decision is a win for the public health of all Oregonians,” said Patricia Kullberg, MD, MPH of Oregon Physicians for Social Responsibility. “The Jordan Cove LNG export terminal and Pacific Connector fracked gas pipeline would degrade drinking water for nearly 160,000 Oregonians and threaten the health of babies, pregnant women, the elderly, low income communities and communities of color. This is what the Clean Water Act was meant to do: protect the environment and public health by keeping our water safe and clean.”

“We’re thrilled that the state of Oregon is standing up for Oregon’s drinking water, local fisheries, and world class waterways by denying this project,” said Sam Krop of Cascadia Wildlands. “This denial should show Pembina their fracked gas project isn’t wanted in Oregon.”

"As we've said all along, it's never a question of whether a pipeline and fossil fuel facility will threaten our communities and waterways, it's a matter of when. We applaud the recognition -- once again -- of the dangers Jordan Cove and the Pacific Connector pose, and for the DEQ rejecting them. Today's decision is a reminder that the people's power, no matter the attempts from corporate polluters and the Trump administration, will never be silenced," said Rhett Lawrence, Conservation Director with the Oregon Chapter of the Sierra Club.

"Frontline organizations across the state oppose the fracked gas pipeline,” said Janaira Ramirez, Coalition Organizer with the Oregon Just Transition Alliance. “We believe Oregon needs a Green New Deal that transitions us from dangerous fossil fuel infrastructure to green jobs and community-controlled, clean and renewable energy, and it begins by ending bad projects like this one."

“We are thrilled for the local activists who’ve spent the last fifteen years fighting for their homes, farms and rivers, and doing a huge part to prevent  climate changing pollution along the way. We hope this will inspire leaders throughout the Northwest to take a strong stand against fracked gas proposals like this highly polluting LNG project in Oregon,” said Dan Serres of Columbia Riverkeeper on behalf of the Power Past Fracked Gas Campaign.

“We applaud the Department of Environmental Quality’s decision to deny the water quality certification for the proposed Jordan Cove LNG terminal. Fracked gas is a key driver of climate change and to avoid runaway climate chaos, we need to take every action possible to stop the expansion of fossil fuel infrastructure, including pipelines and export facilities, and move rapidly to a 100% renewable energy future,” said Mark Schlosberg, Organizing Co-Director with Food and Water Watch.