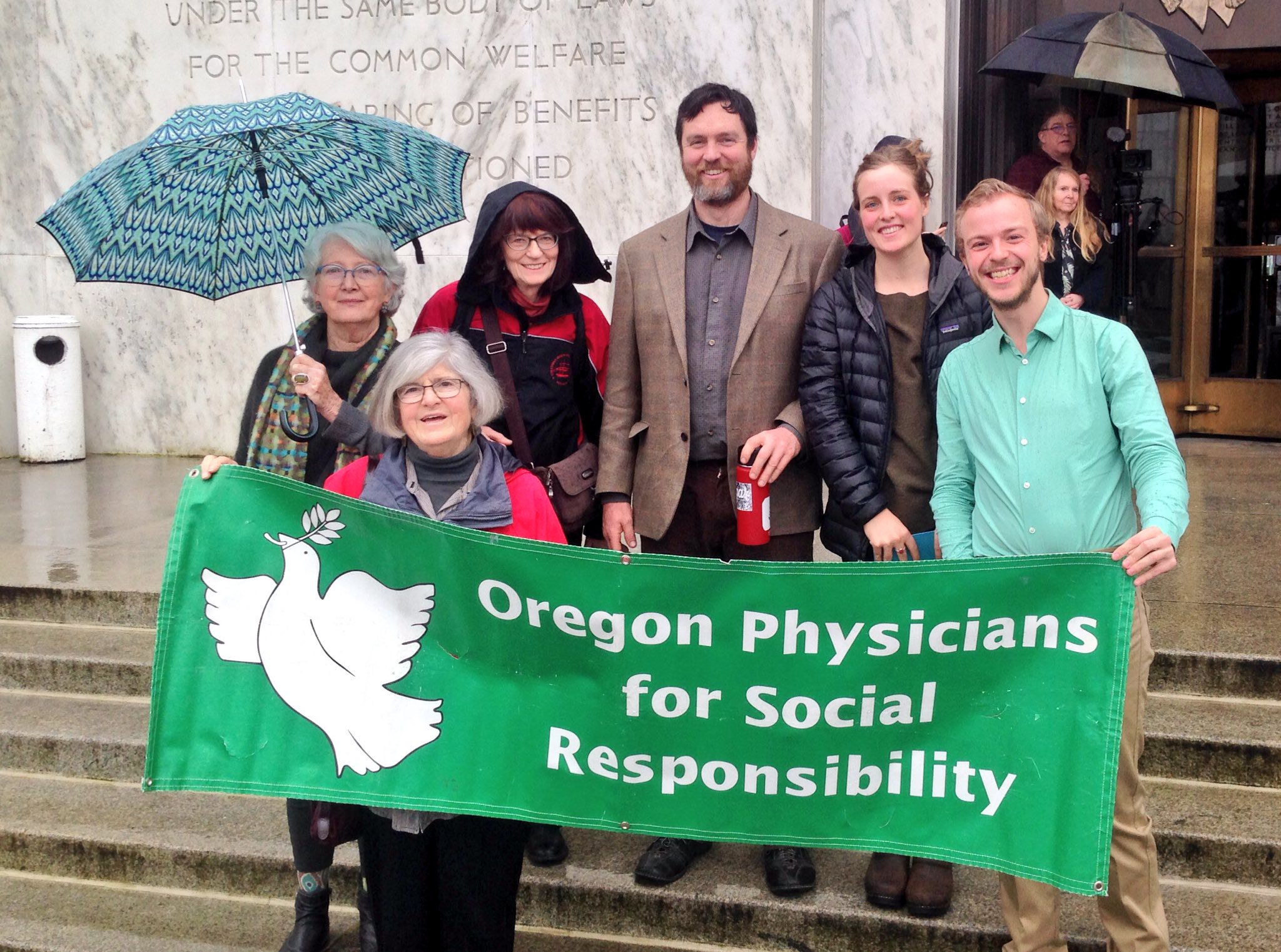 The 2017 Oregon legislative session finished up this month with a few victories and a lot of disappointment in terms of protecting the health of Oregonians. Oregon PSR weighed in on a number of bills from climate and environmental health protection to stopping nuclear power, curbing gun violence, and ensuring all kids have access to health care. Thanks to so many of you who responded to our numerous requests to call your legislators, attended lobby days, and submitted testimony.

Here’s how it all shook out in the end:

As a member of the Oregon Alliance for Gun Safety, Oregon PSR helped bring this bill to victory. The bill creates the procedure for families and/or friends to petition courts to issue a temporary hold on possession of deadly weapons to persons showing risks of harming themselves or others. Similar bills exist in other states and law enforcement widely believes that its presence saves the lives of both victims and perpetrators of gun violence. In Oregon, 83% of gun deaths are suicides, and often the warning signs of gun violence are clear to friends and family. SB 719 was approved by the House and Senate. Oregon PSR collected the signatures of nearly 100 Oregon PSR health professionals who recognize that gun violence is a public health crisis and testified in support of this bill.

We were dismayed to see this important package of firearm safety measures get slowed by procedural issues, weakened by the gun lobby, and ultimately left for dead in the Senate Committee on Rules. Oregon PSR advocated for this package for three primary reasons:

We plan to support these important safety principles in the next legislative session.

Oregon PSR took part in legislative advocacy to support this bill to ensure that all Oregon’s children have access to health care as part of our commitment to health equity and universal health care for all people regardless of immigration status.

Exemption for Small Modular Nuclear Reactors (SB 990) We defeated this!

This ill-advised piece of legislation would have bypassed public health protections for small modular nuclear reactors generating 350 Megawatts (MW) or less. Before any new nuclear power plant may be built, Oregon law requires a statewide vote and a federally-licensed permanent repository for the deadly high-level radioactive waste it would generate. The current design for small modular reactors creates high-level radioactive waste identical to previous reactors, for which there is no safe permanent repository. We got wind of this bill after it quietly passed the Senate virtually unopposed and coordinated a strong grassroots lobbying campaign with partners such as Oregon League of Conservation Voters, Sierra Club, Oregon Conservancy Foundation, Union of Concerned Scientists, and others who jumped in to help us spread the word about the dangers of small modular reactors in the Oregon Legislature. Thanks to contact from outraged constituents and our combined efforts, the bill died without a vote in the House Committee.

As drafted, HB 2131 would have required railroads to submit oil spill contingency plans for state approval, demonstrate their ability to meet the requirements of their plans, provide financial responsibility statements to state regulators and assess fees to the railroads. These protections are required in Washington and California laws. On May 25, HB 2131 was amended to prohibit public involvement and disclosure of oil spill plans, eliminate railroad fees for emergency response planning, remove standards for oil spill plans, and make those plans unenforceable. Financial responsibility statements would have been hidden from the public and exempt from public records requests or court subpoena. Without the ability to review response plans before an emergency occurs, the public would be completely unable to determine the adequacy of those plans. On June 30, the HB 2131 came to a vote in the Oregon House, but was sent back to committee due to public outcry over the secrecy requirements. At the close of the legislative session, the leadership was unwilling to restore public disclosure and pass a meaningful bill.

Oregon PSR supported the principles of the Clean Energy Jobs campaign which would cap and price carbon pollution and invest in clean energy jobs. Early on in the session, both the Senate and House versions of the bill died in committee. Encouragingly, however, in the last week of session, Senators Dembrow and Beyer and Representative Helm introduced an updated version of the bill (SB 1070) and garnered 33 supporters—that’s 1/3 of the legislature—teeing this up for victory in the short session next year. Oregon PSR members testified, talked to their legislators, spoke at rallies, and wrote an Op-ed in support of the bill.

As a member of the Transportation for Oregon’s Future Coalition, Oregon PSR supported the coalition’s principles to ensure that health, equity, and climate friendly provisions were included in the massive transportation package. While we aren’t thrilled with all the components of the bill, there are some key provisions that we and our partners fought for and won, including the first ever statewide long term investment in public transit. The bill will generate an estimated $103 million for climate, health and equity friendly transportation including bicycling, walking and pubic transportation. Thanks to our friends at OPAL, the bill includes an important provision that requires transit agencies demonstrate how they will use new payroll tax funds to meet the needs of low income riders. Oregon PSR’s testimony supported this position as well as expansion of safe routes to schools and other healthy transportation options.

Oregon PSR supported SB 1008, a bill that would have phased out dirty diesel engines in Oregon. Cleaner diesel engines can run with 95% less pollution; deliver as much as $17 in health benefits for every clean-up dollar invested; and can deliver short-term benefits to our climate by reducing black carbon pollution. Unfortunately, this bill was gutted by industry and reduced to simply replacing diesel school buses. While this is a laudable step, it falls far short of what is needed to protect the health of Oregonians from diesel pollution. Oregon PSR members co-organized and attended a rally for clean air at the capitol (see above), submitted testimony, and talked to their legislators to support the bill.

Funding for Cleaner Air Oregon (HB 2269) Did Not Pass

This bill to fund the Cleaner Air Oregon process to deal with air toxics in Oregon, was killed due to industry pressure. As an alternate on the Cleaner Air Oregon Advisory committee, Oregon PSR is disappointed to see our legislators cave to pressure from polluting industries rather than fund this essential program to protect the health of Oregonians.

Oregon PSR offered testimony to support these bills to update and improve the local community right to know regulatory program for toxic and harmful substances. Unfortunately, due to industry pressure, these bills died in committee.

Stay tuned for how you can help ensure that Oregon PSR’s values are expressed in the 2018 short legislative session.