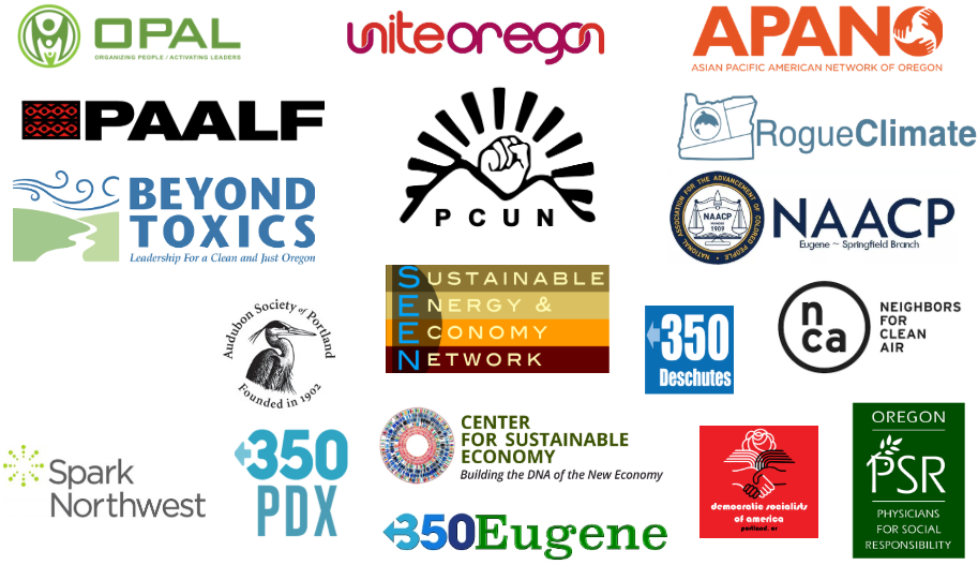 A growing coalition of groups from across the state has unveiled Oregon’s Green New Deal, a bold new proposal for climate action and economic justice. The Oregon Just Transition Alliance has gathered support for the proposal from Portland African American Leadership Forum, Asian Pacific American Network of Oregon, NAACP of Lane County, PCUN, Beyond Toxics, Unite Oregon, OPAL Environmental Justice Oregon, Rogue Climate, and many more. With less than 12 years remaining to stop the most catastrophic climate change scenarios, these groups recognize that Oregon currently has a unique opportunity to adopt bold climate policies that center and uplift those who are most impacted by climate change.

This statewide coalition led by communities of color has endorsed a bold new vision for climate action in Oregon. Dubbed “Oregon Needs a Green New Deal,” the seven point proposal calls for:

Huy Ong, Executive Director of OPAL Environmental Justice Oregon, carried this energy to Washington, D.C., in a meeting with firebrand New York Representative Alexandria Ocasio-Cortez in early January. “Politicians and elected [officials] often feel that their scope of what’s politically feasible is very limited,” Ong told her. Huy pointed to the success of the Portland Clean Energy Initiative at the November ballot, promising, “If you support and back the initiatives and bold visions of what’s happening on the ground, we win what we really need.” OPAL endorses Oregon’s Green New Deal.

“A Green New Deal for Oregon means that communities like ours can benefit from good family wage jobs in clean energy instead of steps that take us backwards like the proposed Jordan Cove LNG fracked gas export project,” said Hannah Sohl of Rogue Climate, a community organization based in Medford. “In southern Oregon, we’re already experiencing the harmful health and economic impacts of climate change. It is urgent for our state leaders to get behind the Green New Deal.”

Congressman Earl Blumenauer said, “As I work with my colleagues in Congress to identify smart and effective policies for a Green New Deal, it’s exciting to see proposals from community-based organizations contributing their visions for what’s needed. The voices of frontline communities — those disproportionately affected by climate change — are absolutely essential as we tackle this tremendous challenge together. I look forward to engaging with these Oregon organizations and many others advocating for bold, progressive, real action in the fight against climate change.”

“We have less than 12 years to act on climate change,” says Kelly Campbell, Executive Director of Oregon Physicians for Social Responsibility. “Pollution from fossil fuels and nuclear power harms human and environmental health. A Green New Deal in Oregon is needed to remedy health disparities and build resilience to a changing climate.”

Metro Councilor Juan Carlos Gonzalez: “Climate Change is an existential threat to humanity, especially for our most vulnerable communities. I trust that our state legislators will act decisively to meet the pressing needs of this generation, and for the livelihood of future generations of Oregonians. I support Oregon’s Green New Deal because it will set Oregon on a greener and more equitable path for environmental justice.”

Portland City Commissioner Chloe Eudaly: “We're at a critical moment in time with climate catastrophe headed our way at an accelerated pace and the federal government working against the best interests of our people and our planet. Our only hope is local power, and that power comes from the ground up. Oregonians have led the way in the past on environmental issues, it's time for us to step up again and show the country and the world what a Green New Deal can and should look like with impacted communities, environmental advocates, and social justice leaders at the helm. I'm proud to support the vital work of this coalition and Oregon's Green New Deal!”