On Wednesday, August 9th, 2017, Oregonians gathered in downtown Portland on a hot summer evening to commemorate the tragedy of the atomic bombings of Hiroshima and Nagasaki during World War II in 1945. This year marks the 72nd anniversary of the horrifying loss of tens of thousands of lives as the United States' military deployed its nuclear arsenal. This memorial event came one month after 122 countries voted in the United Nations to approve a historic ban treaty on nuclear weapons. It also occurred in the midst of the US' current embroilment in nuclear threats with North Korea. 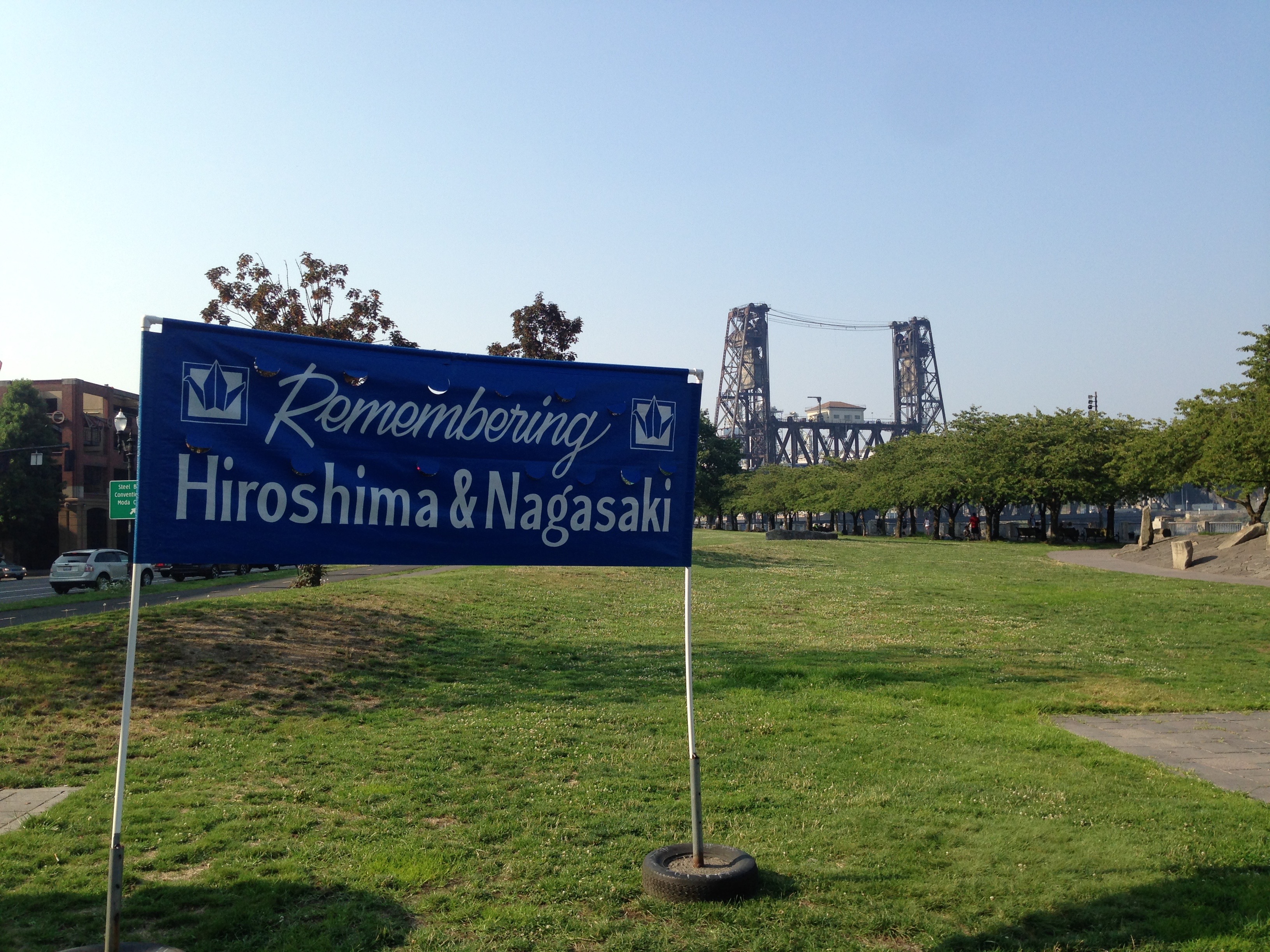 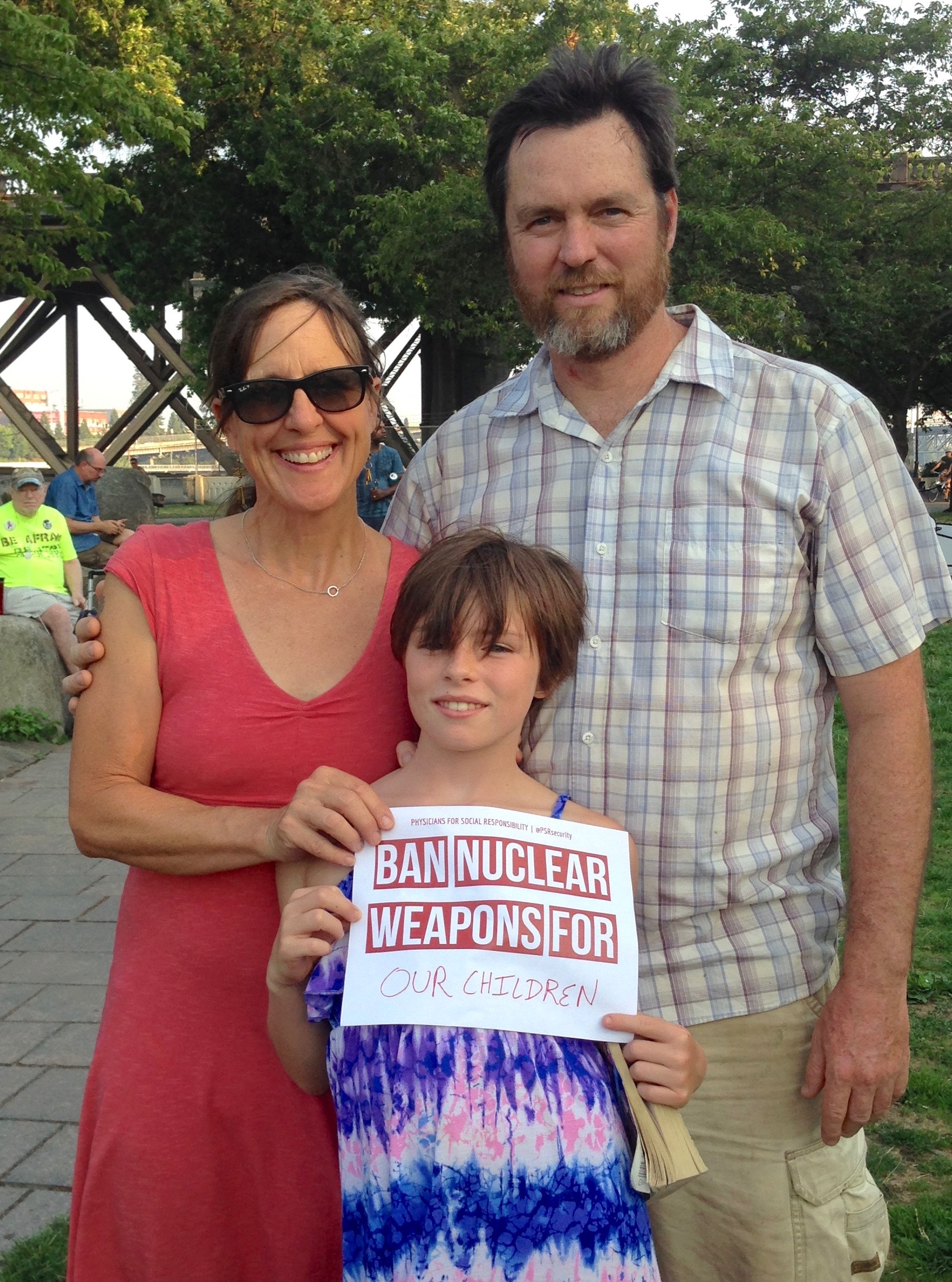 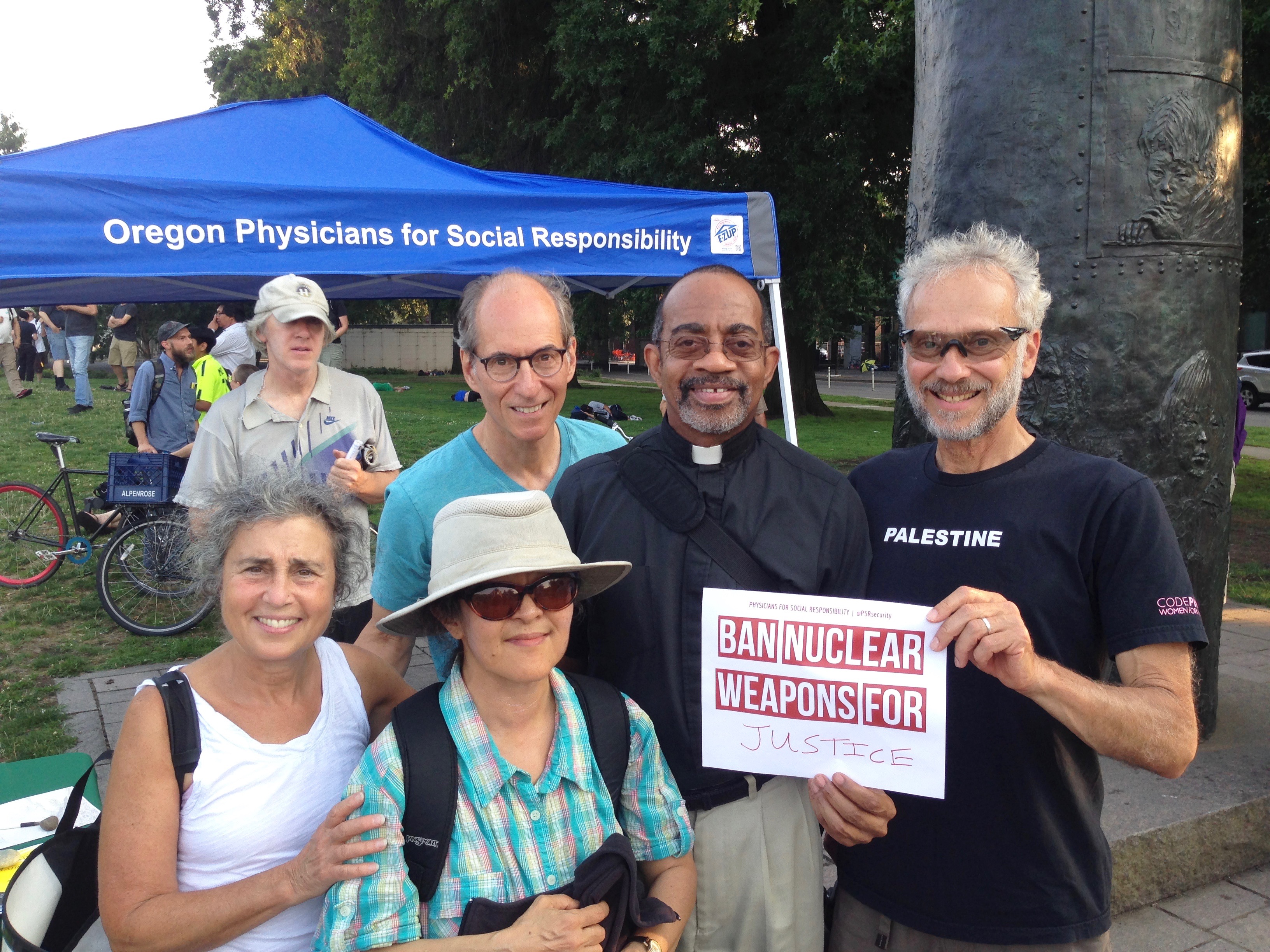 The theme of this year's memorial was "Remembering Hiroshima and Nagasaki: From Despair to Hope." Oregon PSR's Associate Director Sean Tenney spoke of historic new movements to ban nuclear weapons and a rise in activism among his community as sources of hope as we honor the despair of Japanese communities' trauma. Community groups including faith communities and Veterans for Peace Chapter 72 held vigil with flags and a giant peace dove. 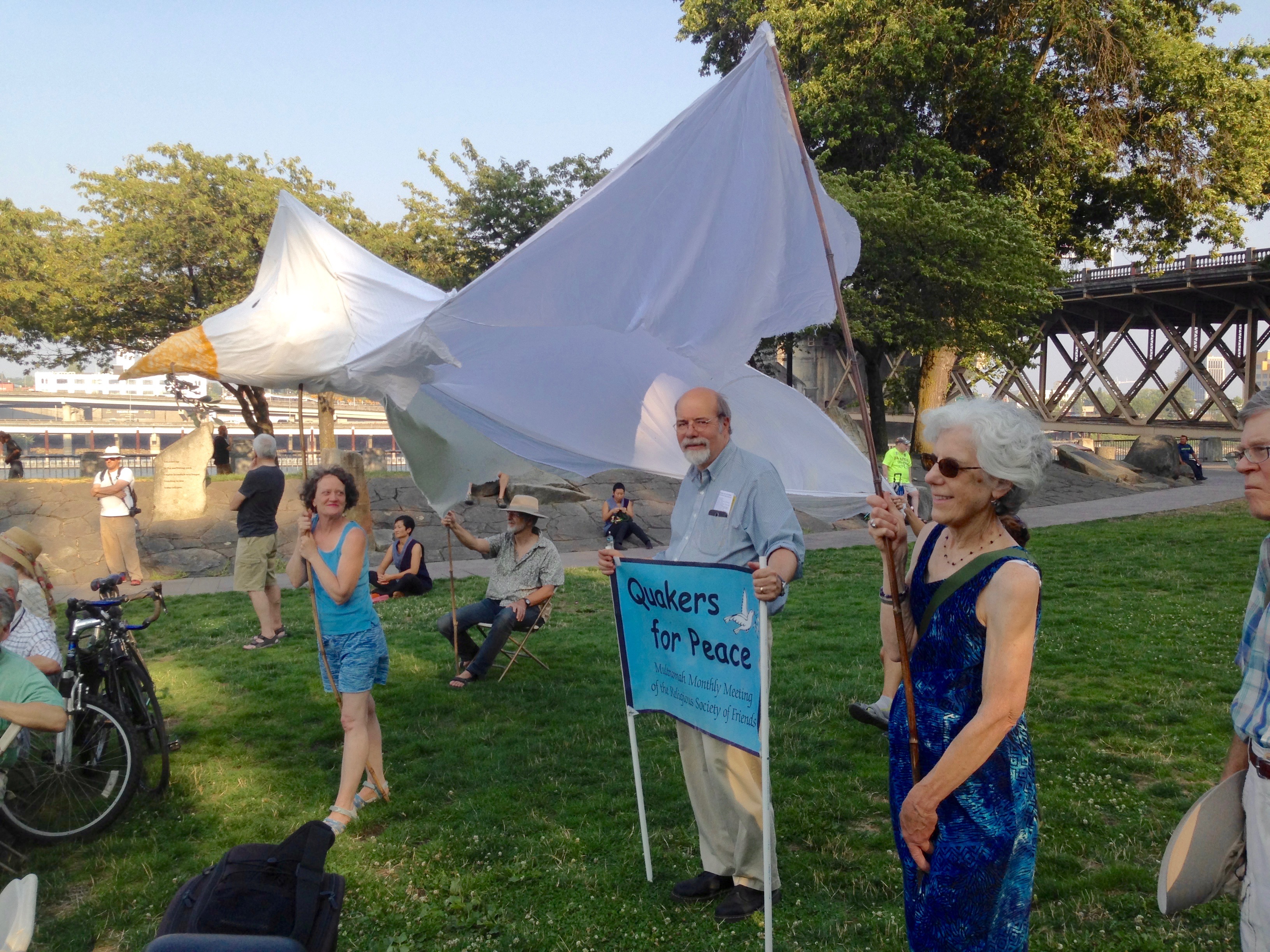 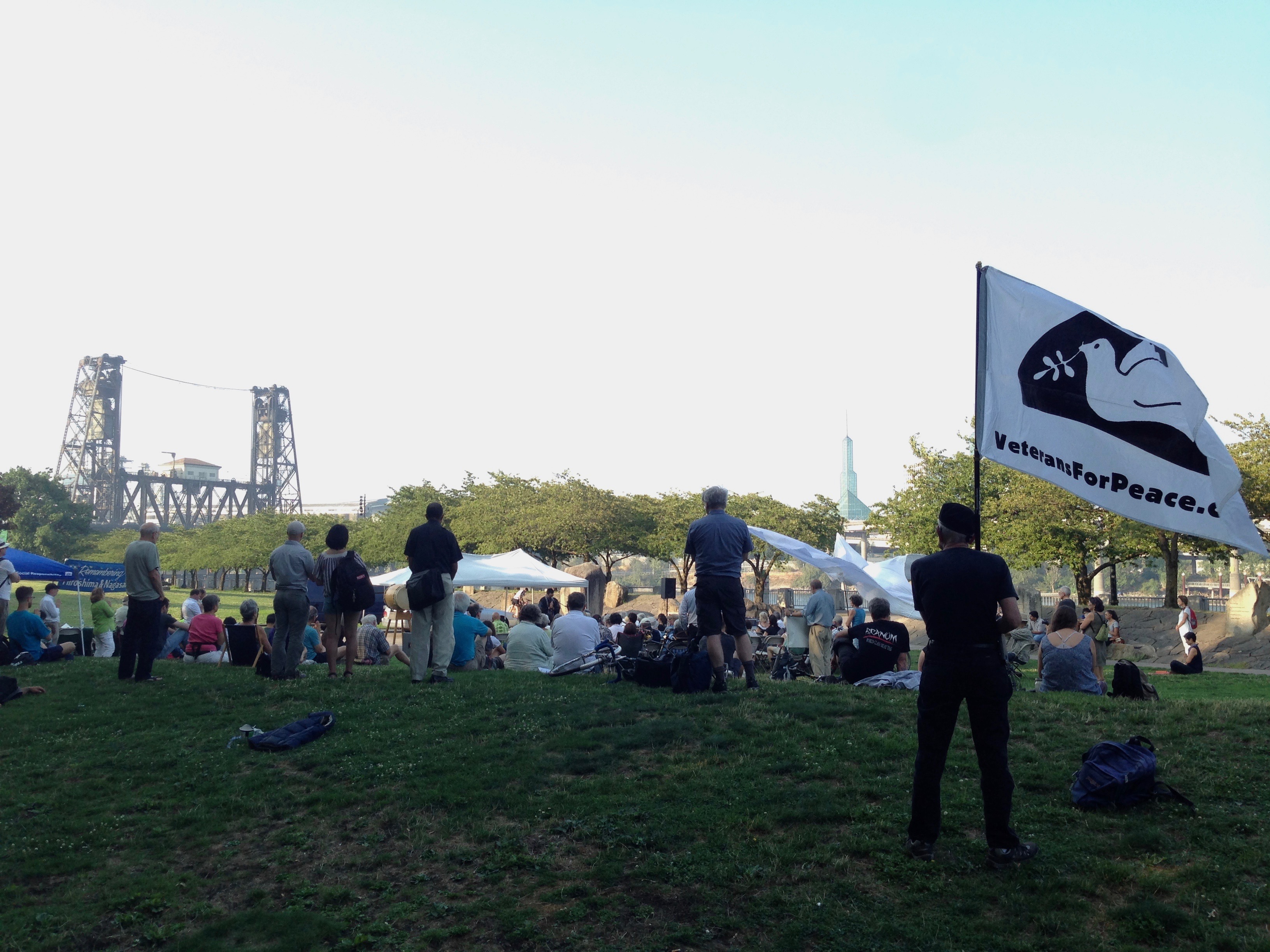 Artists Yukiyo Kawano and Allison Cobb shared a multilingual poem as a teaser for their art event that was hosted in conjunction with the outdoor program. That art event, "Suspended Moment" was performed with butoh, sound, words, light, and poetry. It was performed in the shadow of the to-scale model of the nuclear weapon dropped on Hiroshima made out of Yukiyo's hibakusha grandmother's kimonos. 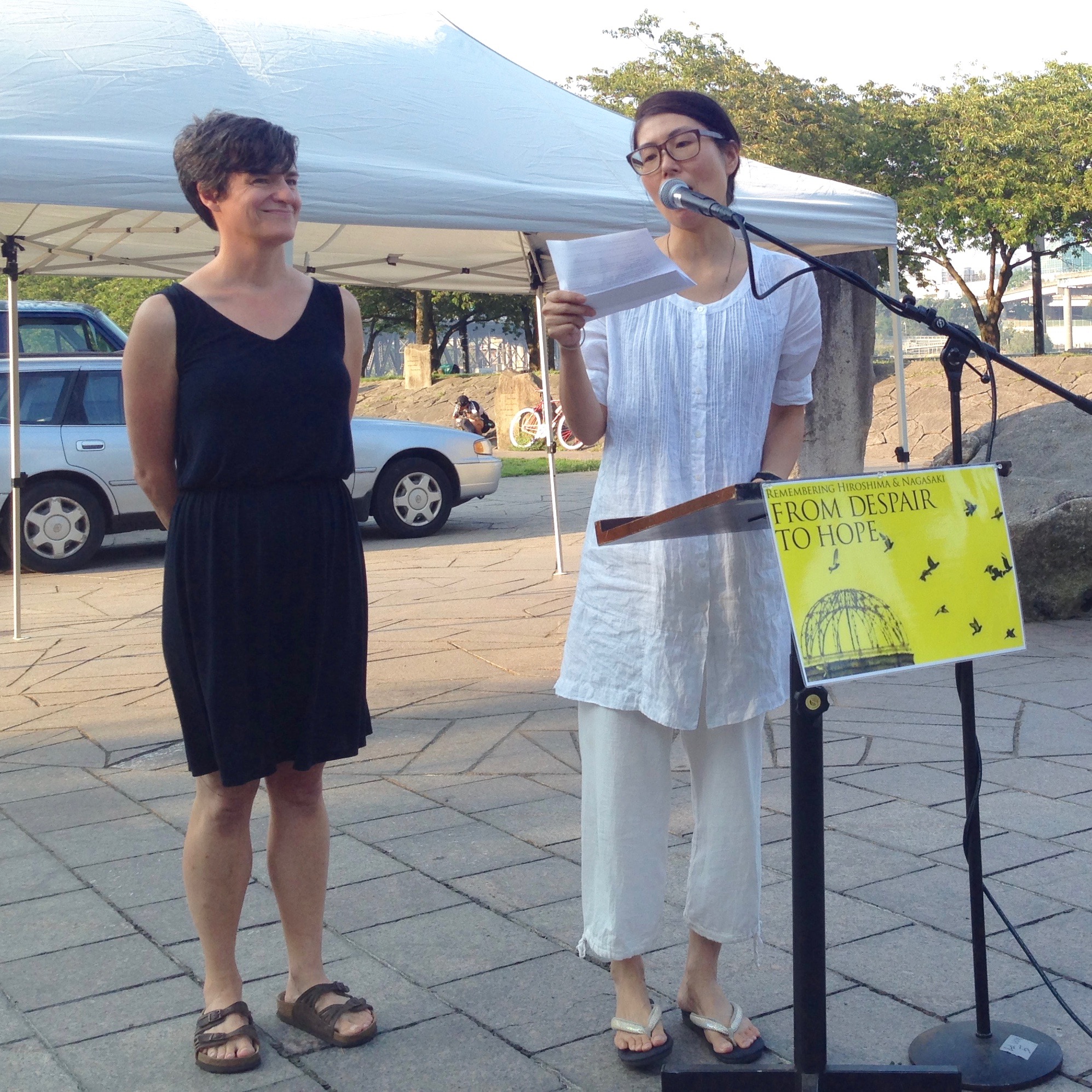 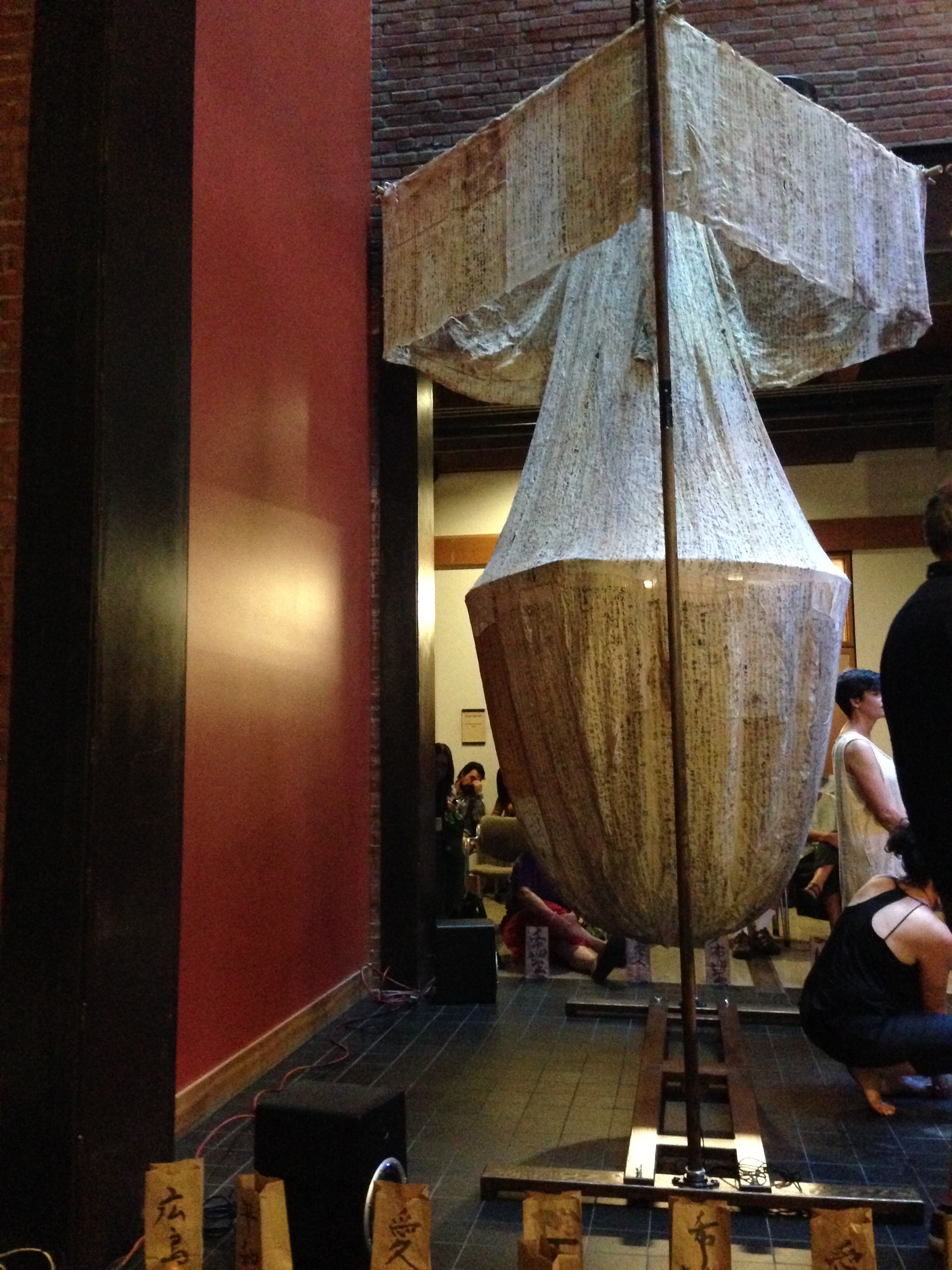 Yukiyo Kawano's life-size nuclear bomb sculpture, made out of her grandmother's kimonos.

We were fortunate to have community activist Polo Catalani emceeing the event. The Reverend Yuki Sugahara of the Oregon Buddhist Temple led the crowd in a moment of silence. Portland Taiko was generous in performing as an opening and closing to the spoken program. 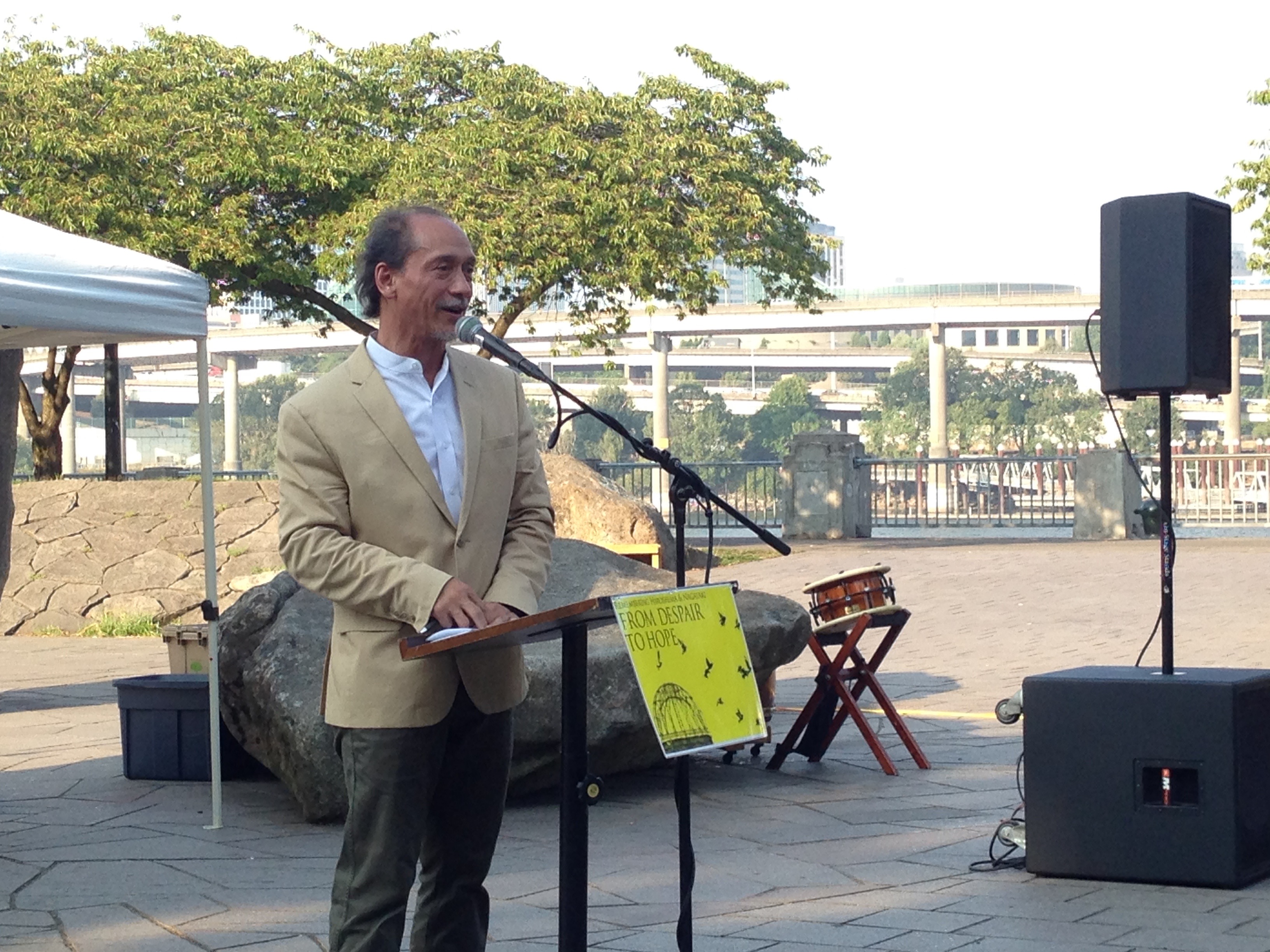 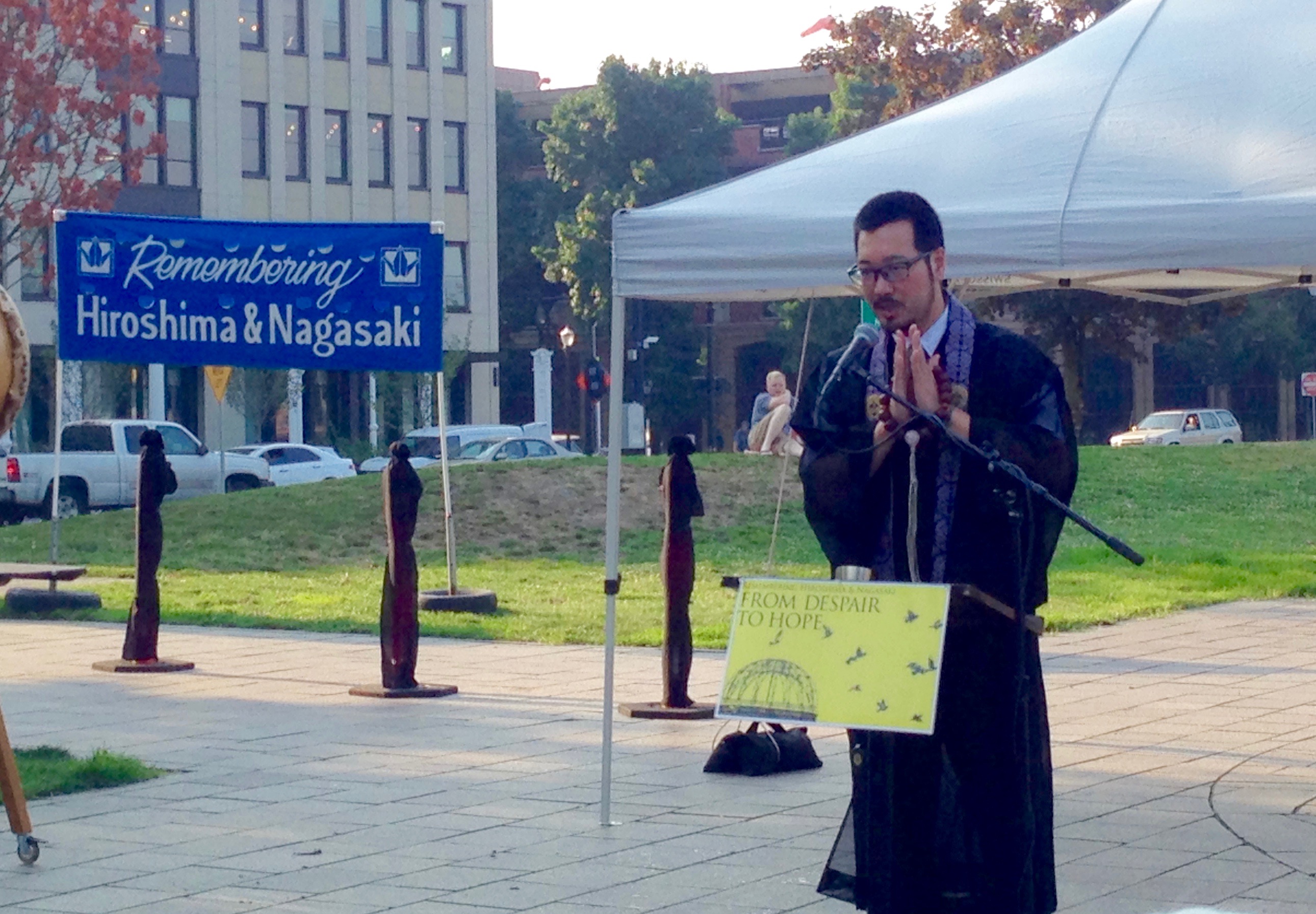 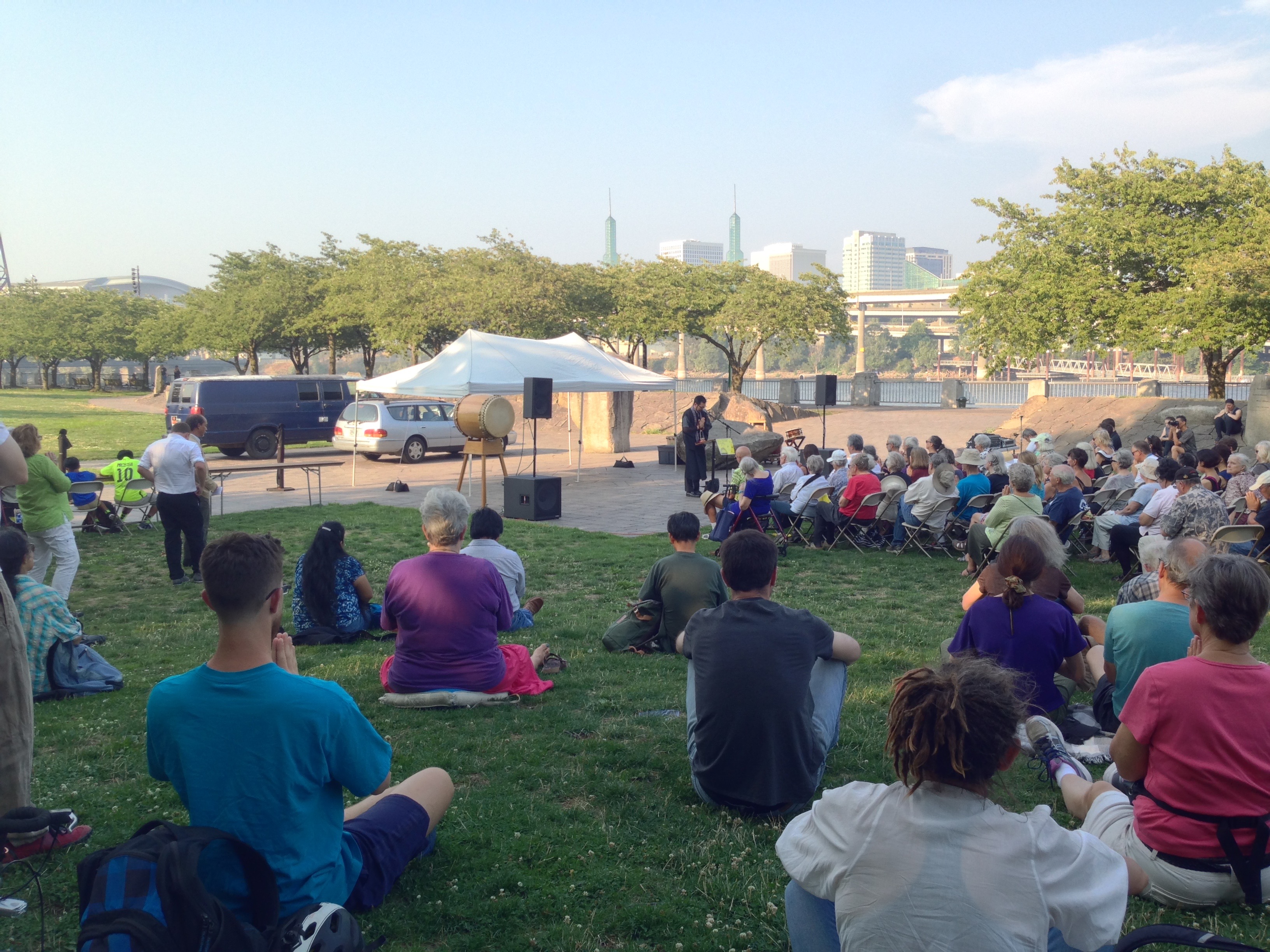 We are grateful to all of the cosponsoring organizations and generous donors who helped to make this event possible. We will see you next year, and before then, we will see you in the streets as we mobilize to ensure that nuclear weapons are never used again.

View the video of the Portland Taiko opening performance.

Read the Mayor of Portland's 2017 proclamation of "Nagasaki Day for Nuclear Weapons Abolition."