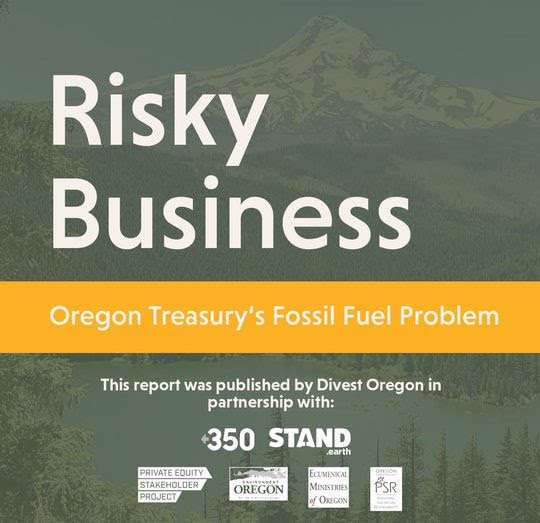 From heat domes to droughts, climate change has already arrived in Oregon with devastating impact for Oregonians navigating rising houselessness, the state’s legacy of white dominance, and rural poverty. Is our state government doing all it can to protect our future? Despite broad commitments to climate action, the Oregon State Treasury - which manages $140 billion of our money - still has billions invested in fossil fuels, a sector that has contributed more than any other to the climate crisis.

Our partners at Divest Oregon will feature a never-before-published analysis of the state's fossil fuel holdings. Divest Oregon sent an early release copy to the Treasury to be fully transparent. Here’s part of what they responded: “Climate change is a profound and persistent threat to Oregonians and a risk to institutional investors like Oregon State Treasury.”

Join to learn just how much the Oregon State Treasury is invested in fossil fuels and why ditching oil, gas, and coal from our pension funds and retirement portfolios makes climate AND economic sense. Hosted by Divest Oregon, this launch event will feature a tour of top-line findings as well as a deep dive into their analysis. There will also be a Q&A session at the end of the presentation to get your questions answered!

Noted climate activist and author Bill McKibben is the guest speaker along with a representative of the Private Equity Stakeholder Project and members of the Divest Oregon Coalition. For more information, contact Divest Oregon.

Register to attend this online event.