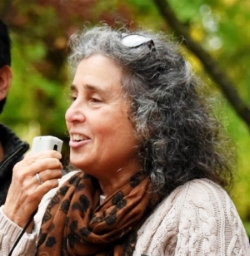 Since 2017, Oregon PSR has been working with many other organizations on a campaign to end Portland’s cooperation with the FBI’s Joint Terrorism Task Force (JTTF), a program of cooperation between local law enforcement and federal law enforcement agencies such as the FBI, Immigration and Customs Enforcement (ICE), and others. Human and legal rights groups such as the ACLU assert that JTTF collaboration does nothing to improve overall community safety and, in fact, by profiling and targeting vulnerable communities, it makes individuals feel less safe to report crimes or concerns.

Thank you, Mayor Wheeler and City Council Members. My name is Maxine Fookson. I speak as a Nurse Practitioner representing Oregon Physicians for Social Responsibility. Our organization urges you to withdraw from the Joint Terrorism Task Force.

Oregon PSR is an organization of health professionals and public health advocates concerned about threats to human health from war and social inequities. From our perspective, our city’s involvement in the JTTF is of grave concern, as we see no evidence that the collaboration protects either the community’s safety or health.

The American Public Health Association issued a statement last year declaring that police violence is a public health issue that disproportionately impacts communities of color, people with disabilities or mental illness, people living in poverty, people experiencing homelessness, immigrant populations, and LBGTQ communities. In short, how we police communities has a direct impact on the public’s health.

Considering both effectiveness AND equity, we dig ourselves deeper under in the relationship with the JTTF. There is repeated evidence that the FBI and ICE disproportionately target communities based on national origin, race, religion, political beliefs, and sexual and gender preference.

What does it mean to be in partnership with agencies that repeatedly act in secrecy and with disregard for human rights?

The health connections are real and direct—this is not some distant correlation. The Century Foundation found direct negative health impacts as a result of fear coming from surveillance, targeting, profiling, and lack of transparency from public agencies. The heaviest impact is on communities already at a health disadvantage as a result of poverty, race, and immigration status. [1]

Fear has a correlation with stress and is a potent source of trauma--which in turn causes or exacerbates a variety of serious chronic health and mental health problems. It is known that when communities live in fear or distrust, they also under-access needed health, education and social services. This does not make us safer or better off.

As advocates for community health and safety, Oregon PSR believes that policing should be based on transparency, fairness, community involvement, cultural competency, and restorative practices. In order to achieve this, Portland must end its participation with the JTTF.