Treaty on the Prohibition of Nuclear Weapons Enters Into Effect 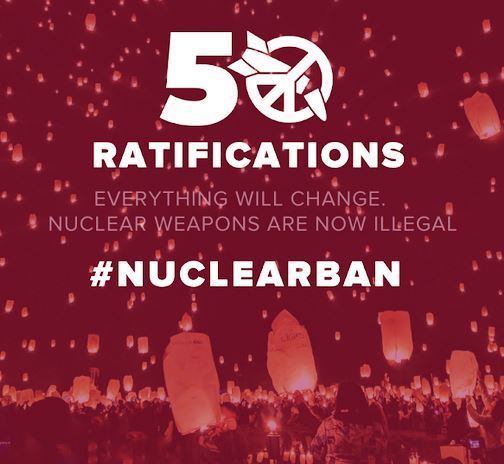 On July 7th, 2017, a United Nations conference adopted the Treaty on the Prohibition of Nuclear Weapons. On October 24th, 2020, Honduras became the 50th country to ratify the treaty, which will begin to take effect in 90 day. This historic treaty was led by the International Campaign to Abolish Nuclear Weapons (ICAN), which received the 2017 Nobel Peace Prize for their work. Oregon PSR is the local affiliate of ICAN and in 2019 secured support for the treaty from the Oregon legislature and the City of Portland.

The treaty specifically prohibits nations from developing, testing, producing, manufacturing, transferring, possessing, stockpiling, using, or threatening to use nuclear weapons. Ratification of this treaty is a significant step forward in the global effort to abolish nuclear weapons, though much work remains to pressure the 9 nuclear-armed states, including the US, to support the treaty and curtail nuclear weapons development and spending. We congratulate everyone involved in this process, which will guide our efforts for nuclear justice and full and lasting nuclear disarmament in the years to come.

Learn more about this historic step towards nuclear disarmament: