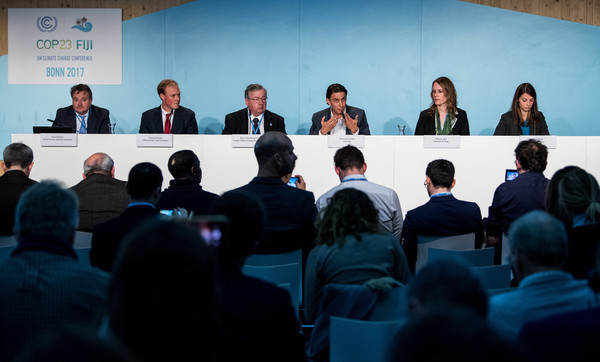 It was a strange year for the United Nations Climate Summit in Bonn, Germany. Par for the course after declaring intent to withdraw from the Paris Climate Agreement, Donald Trump's official United States representatives to the climate talks in Germany were representatives from the coal, gas, and nuclear power industries. Lenka Kollar of NuScale Power (a nuclear reactor designer) sat directly to the left of Holly Krutka of Peabody Energy, the largest private-sector coal company in the world. The panel's title, “The Role of Cleaner and More Efficient Fossil Fuels and Nuclear Power in Climate Mitigation,” sounded like something out of a satirical newspaper.

Click here for video from a youth protest of Trump's fossil fuel and nuclear panel at the Bonn Climate Talks.

But the reality of environmental injustice from fossil fuels and nuclear power is no joke. Climate change from human-made greenhouse gas emissions is already affecting global health in the form of extreme heat waves and droughts, longer fire seasons, and deadly storms. Bill McKibben, the founder of 350.org, says that in order to stay below an average global temperature rise of 2˚C and thereby avert even graver catastrophe, we must keep 80% of fossil fuel reserves in the ground. There is no room for coal or fracked gas in mitigating climate chaos.

And though on the surface it may be tempting to explore nuclear power as coal and gas plants are retired, it is vitally important to remember that nuclear energy is an disastrous extractive energy source of its own variety. Between 1944 and 1986, mining companies blasted 4 million tons of uranium out of Navajo land, a legacy which continues to hurt Navajo communities today. Nuclear engineer Arjun Makhijani says that a “nuclear renaissance” would need 300 reactors every week, 2-3 uranium enrichment plants every year, and up to 5 million gallons of water per day. Spent nuclear fuels can take up to hundreds of thousands of years before exposure is no longer lethal, and there is still no permanent repository for our nation's radioactive waste.

Lenka Kollar's company, NuScale Power (headquartered in Tigard, Oregon), claims that small modular nuclear reactors need to be considered in conversations about addressing climate change. What her company fails to address is that smaller reactors still consume the same environmentally unjust fuel and create the same highly volatile waste as conventional nuclear reactors. NuScale also fails to solve the surging costs of nuclear power, and even their own numbers place a 12-pack of their small modular reactors as more expensive than wind and hydroelectric power. And solar prices continue to fall year after year.

NuScale's small modular reactors are the "clean coal" of the nuclear industry. As Peabody coal made grand promises in Germany about technological innovations in fossil fuel burning techniques, the youth in Bonn knew that the real solution is to leave this industry behind in favor of truly clean energy (and the jobs that come with it). The same type of grand promises are put forth by Trump-endorsed NuScale, and we must be vigilant in keeping them away from massive federal subsidies to generate new dirty, costly, and dangerous nuclear power.