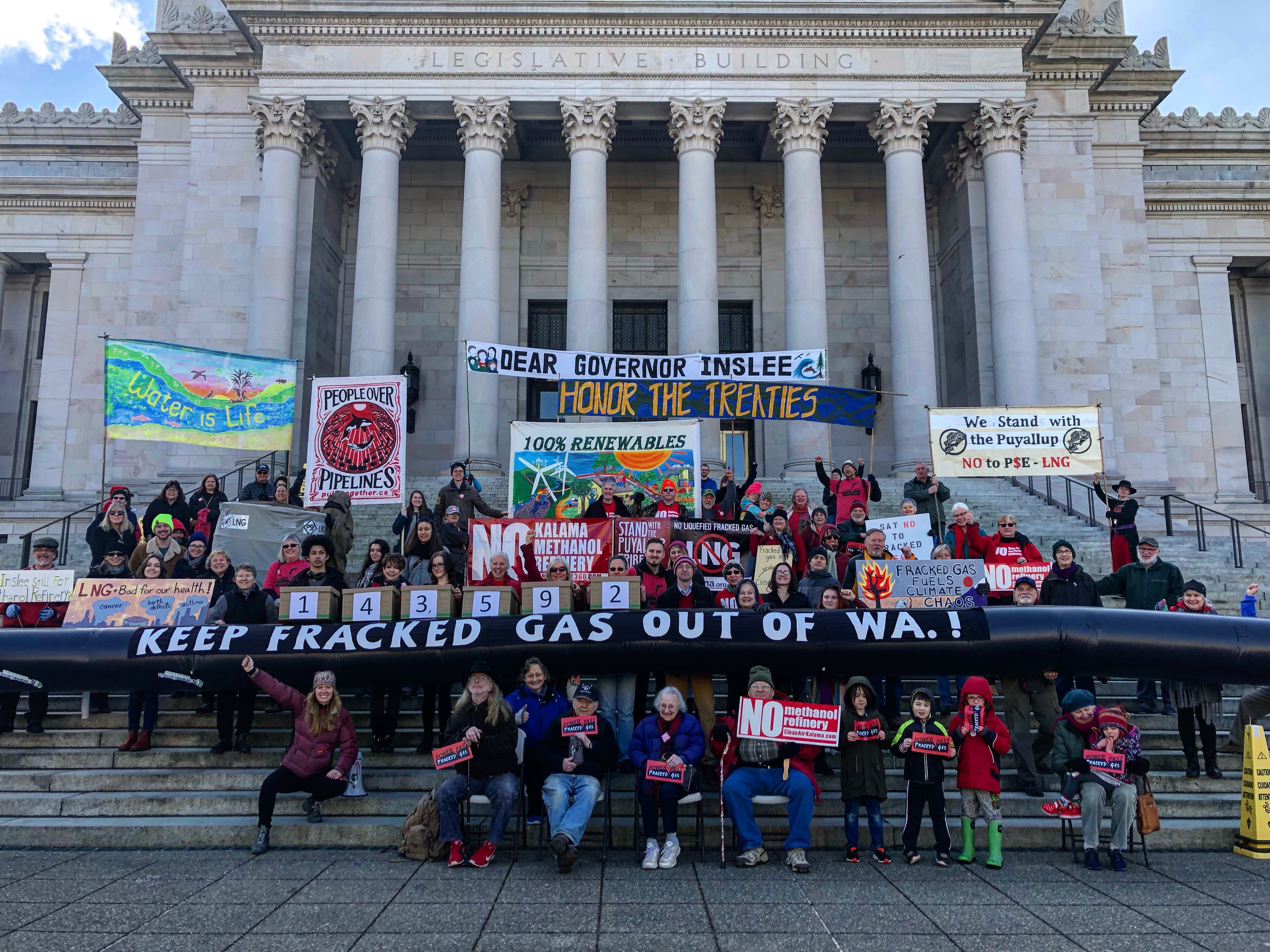 The Power Past Fracked Gas coalition now looks to the City of Tacoma and the Washington State Department of Ecology to perform a supplemental environmental impact statement to evaluate changes to and safety concerns with the Tacoma LNG facility. The coalition also urges Washington’s Department of Ecology to reject the Kalama methanol refinery lead agencies’ inaccurate and incomplete environmental analyses.

“It’s never too late to do the right thing as the governor has proven with signing Senate Bill 5145 into effect,” said Dakota Case, a leader with the Water Warriors and a Puyallup Tribal member. “He has come out in opposition of the PSE liquefied natural gas facility that has continued to pose a threat to our tribe, salmon, and surrounding communities. This is definitely a blow in the fight with Puget Sound Energy’s blatant disregard of public safety.”

“For years, Washington communities have organized and mobilized to demand the rejection of these fracked gas facilities, and today, Governor Inslee listened to those calls,” said Sierra Club Executive Director Michael Brune. “The Sierra Club applauds the governor for taking this significant action just one day after signing a bill requiring an equitable transition to 100% clean energy. This is the kind of leadership that is needed to protect families and communities and to keep Washington State on the path towards clean energy.”

“We applaud Governor Inslee for his leadership in recognizing that our region has no place for more fracked gas projects as we transition to clean and renewable energy,” says Joan Crooks, CEO of Washington Environmental Council and Washington Conservation Voters. “We are committed to protecting communities from new dangerous and dirty fracked gas projects like Tacoma LNG and Kalama Methanol, and we stand in solidarity with the Puyallup Tribe and community members who have led this fight from the beginning, to ensure the strongest possible scrutiny and rejection of these projects.”

“People up and down the Columbia River are celebrating Governor Inslee’s bold action to protect our climate and communities across the Pacific Northwest from the fracked gas industry,” stated Brett VandenHeuvel, Executive Director for Columbia Riverkeeper.

“Health professionals across Washington applaud Gov. Inslee for opposing these harmful projects, which threaten our health and climate,” said Dr. Mark Vossler, cardiologist and President of Washington Physicians for Social Responsibility. “We are hopeful that his office can now take the next step and reject the incomplete environmental reviews for both the Tacoma and Kalama projects.”

“While we celebrate Governor Inslee’s public opposition to LNG we know it takes more than words,” said Val Peaphon of Redefine Tacoma. “We won’t give up or let up until Puget Sound Energy’s fracked gas project is dead. Activism works and we must continue to actively fight fossil fuel greed and domination including methanol and expansion of existing gas and oil industries in the Port.”

“We are so glad that Governor Inslee is ready to embrace best available science around the damage that fracked gas is causing to our planet and to our communities as well as revisiting how these projects are analyzed in future permitting decisions,” said Stacy Oaks, an organizer with 350 Seattle. “We hope that input from grassroots organizations and frontline communities are centered in the reevaluation process.”

“It is good to see Governor Inslee take a position against these fracked gas projects” said Kevin Jones, Vashon Climate Action Group board member. “The approval process to date has either ignored climate impacts as being ‘too remote’ or have been over reliant on low methane leak data from British Columbia fracked gas wells. BC methane leaks are substantially under-reported, and not a valid basis for claiming greenhouse gas emission reductions.”

Power Past Fracked Gas is a growing coalition of Pacific Northwest health, environmental, faith, and community groups that believe in the power of clean energy and the value of clean water. We oppose new fracked gas infrastructure that locks our region into decades of continued reliance on dirty energy and harmful projects.