We Are All America Week of Action for Immigrant, Refugee, and Muslim Rights 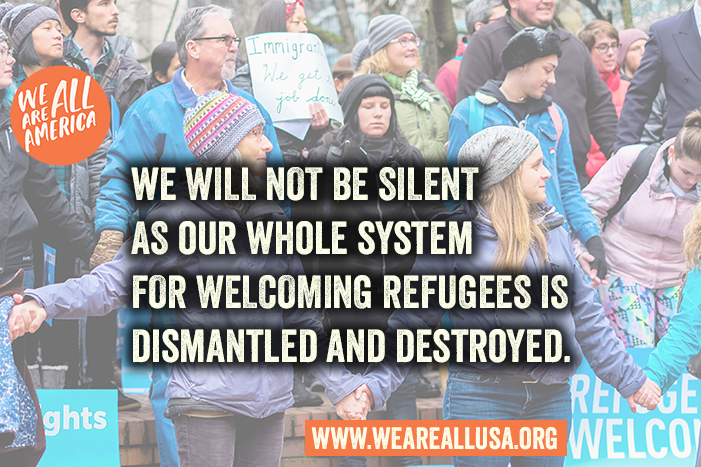 On January 27th of last year, the Trump Administration released executive orders banning individuals from a number of Muslim-majority countries — and all refugees —from entering the country. Thousands took to the streets and flooded airports where people from Muslim-majority countries and refugees were being detained and, in many cases, sent back.

Our community partners at Unite Oregon responded immediately and stood firmly against these racist policies by partnering with ACLU and Immigrant Law Group to sue Trump, providing "know your rights" trainings and workshops across Oregon, organizing rallies and marches, obtaining an executive order from Governor Brown reiterating the state's sanctuary policy and refusing to allow Muslim registration in Oregon, developing rapid response plans to immigration enforcement and increased surveillance, passing inclusive community resolutions in cities across the state, and more.

Over the past year, the administration has increased its assaults against immigrants, refugees, and Muslims. We have seen multiple additional bans on people from Muslim-majority countries, the dismantling of the US refugee resettlement program, and the rescinding of Deferred Action for Childhood Arrivals (DACA) and Temporary Protected Status (TPS) for hundreds of thousands.

On January 27th of this year — the one-year anniversary of the Trump Administration’s unconscionable Muslim and refugee ban — the We Are All America campaign will launch a week of actions, which Oregon PSR has endorsed.

Learn about the refugee ban, hear stories from impacted Oregonians from immigrant, refugee, and Muslim communities, and find out how you can join our fight to protect and welcome all who are seeking refuge from violence, persecution, and climate displacement.

We hope that you will join Oregon PSR, our Unite Oregon partners, and our immigrant, refugee, and Muslim communities in this nationwide effort to keep up the public pressure and media coverage to stop the Muslim and refugee bans.