Who Holds the Power? Resisting the Inequitable Site Placements of Renewable Power Projects 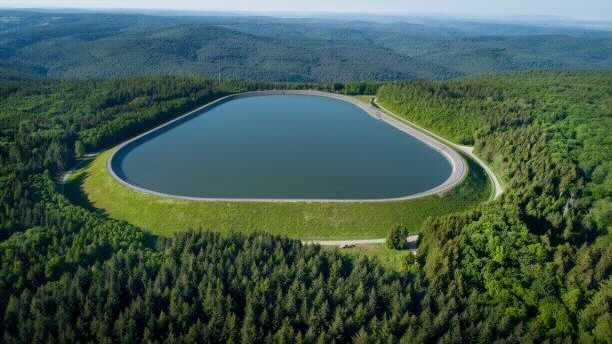 As we move towards a more solar- and wind-dependent energy grid in the United States, the need for energy storage is expected to increase dramatically. Since solar and wind power systems are dependent upon the sun shining or the wind blowing, their reliability hinges upon storing energy when generation is higher than demand and releasing it when demand is higher than generation. Currently, the two leading technologies for this wide-scale level of energy storage include pumped hydro energy storage and battery systems. A recent academic review of both systems highlights their individual strengths:

"Pumped hydro energy storage (PHES) comprises about 96% of global storage power capacity and 99% of global storage energy volume. Batteries occupy most of the balance of the electricity storage market including utility, home and electric vehicle batteries. Batteries are rapidly falling in price and can compete with pumped hydro for short-term storage (minutes to hours). However, pumped hydro continues to be much cheaper for large-scale energy storage (several hours to weeks)."

Considering their differences, many experts posit that a combination of both PHES and battery systems are necessary for a national transition to renewable energy. However, it is important to note that each poses potential risks and justice concerns. For batteries, sourcing and extracting metals that include lithium, nickel, and cobalt may be hindered by limited availability in the future; the demand for lithium is expected to increase by 40 times in the next twenty years, and cobalt and nickel are already subject to supply chain constraints. Also, when extracting any natural resources, it is necessary to ask what extraction processes are being used, how the surrounding communities and ecosystems are impacted by the extraction, and whether or not these processes are being conducted in a manner that considers the wants, needs, and health of local residents. Many of these issues also surround PHES building projects, including the Goldendale Energy Storage Project in Washington, which has been adamantly opposed by the Confederated Tribes and Bands of the Yakama Nation and Columbia Riverkeeper. In this article, we will examine the implications of pumped hydro energy storage systems and their role in a just transition to renewable energy.

Pumped hydro energy storage (PHES), or pumped storage hydropower (PSH), is a system that utilizes two large reservoirs at different elevations to generate power by moving water between the two. The movement of water from high to low is called discharging, and during this process, water passes through a turbine to generate electricity. In reverse, the system uses energy so that the turbine can become a pump, transferring water from the lower reservoir to the upper reservoir. Pumping usually occurs when electricity prices are low, such as on a sunny day when a large supply of solar power is available; generation usually occurs when electricity is in high demand, such as in the evening when the sun is not shining – this process is known as arbitrage. When building PHES systems, it is important to assess the appropriate amount of energy storage capacity for a site: “It is possible that a pumped storage project can act to flatten peak prices to the point where the returns on a project are insufficient to meet financiers’ hurdles, so detailed revenue modeling is essential to determine the tipping point between enough and too much installed capacity.”

Currently, two types of PHES technologies exist: open-loop and closed-loop systems. Open-loop systems rely on naturally-flowing water sources, such as rivers; all PHES systems in the US are considered open-loop. Closed loop systems, on the other hand, do not require continuous connection to a natural water source. Evidence also shows that closed-loop systems pose fewer environmental risks. These “offstream” or “off-river” systems utilize artificial reservoirs: “The reservoirs can be specially constructed (‘greenfield’) or can utilize old mining sites or existing reservoirs (‘brownfield’).”

However, even closed-loop projects have the potential to impose an immense burden on the communities where they are placed. In 2021, Oregon PSR signed onto a letter authored by the Confederated Tribes and Bands of the Yakama Nation in response to the Goldendale Energy Storage Project. In their response, the Yakama Nation highlighted that the proposed site for this project is the former site of the Columbia Gorge Aluminum (CGA) smelter site, which already suffers from groundwater and soil contamination. The Goldendale project description proclaims the need for a cumulative 120 acres of land to build two 60-acre reservoirs. Despite this being a closed-loop project, it still requires that 2.93 million gallons be extracted from the Columbia River to fill the reservoirs, which impacts aquatic life – especially salmon – in the river. According to the 1885 Treaty between the United States and the Yakama, the Columbia River is a protected fishing territory of the Yakama Nation, and in 2021, they successfully urged the Department of Ecology to reject the Water Quality Certification (WQC) that is required for the Goldendale project to begin construction. The Goldendale project may reapply for a permit following a review of the environmental impact of this project by the Department of Ecology, which should be completed by July 2022.

This is not the first instance of unjust siting that hinders an otherwise environmentally-beneficial project. In October of 2021, Oregon PSR was made aware of Magic Valley Energy’s “Lava Ridge Wind Project” by our partners at the Portland Japanese American Citizens League and Japanese American Museum of Oregon. This building project of 400 wind turbines is sited on the Minidoka National Historic Site, where thousands of Japanese Americans – many of them from Oregon – were wrongfully imprisoned in Idaho during World War II. The construction of these wind turbines would obstruct and detract from the historical weight and unique experience that this site offers to its visitors, and furthermore, would disrespect the Japanese American community to whom this land is incredibly significant.

There is no doubt that we must transition to renewables to allay the current existential threats posed by climate change, and particularly, the fossil fuel industry – but how we do it matters. It is imperative that we ask questions to assure our transition is not just “green” or “clean,” but fundamentally just. Does the proposed project honor Indigenous treaties, extract natural resources from Indigenous communities, or override outspoken opposition to the project by Indigenous or other marginalized communities? Are we conducting ecological impact assessments to assure that building projects and construction do not destroy surrounding ecosystems? Are decisions for this project being made by the impacted communities, or for the impacted communities? This just transition framework, developed by Movement Generation, puts forth the idea that “after centuries of global plunder, the planet will no longer sustain the industrial economy without massive ecological — and economic — disruption. Transition is inevitable. Justice is not.”

As an organization of health professionals and public health advocates, we believe in climate solutions that also take care of people and communities. According to Renewable Energy World, there are approximately 35,000 viable sites in the United States that provide the necessary geographic elements for a closed-loop pumped hydro storage facility, which don’t require river access. For a transition to a 100% renewable energy system, the US would require a few hundred PHES facilities nationwide; it is important that these sites are selected thoughtfully and with decisions made by impacted communities. We stand with the communities who believe that we can – and must – do better.