Why We Are Fighting Fracked Gas Exports 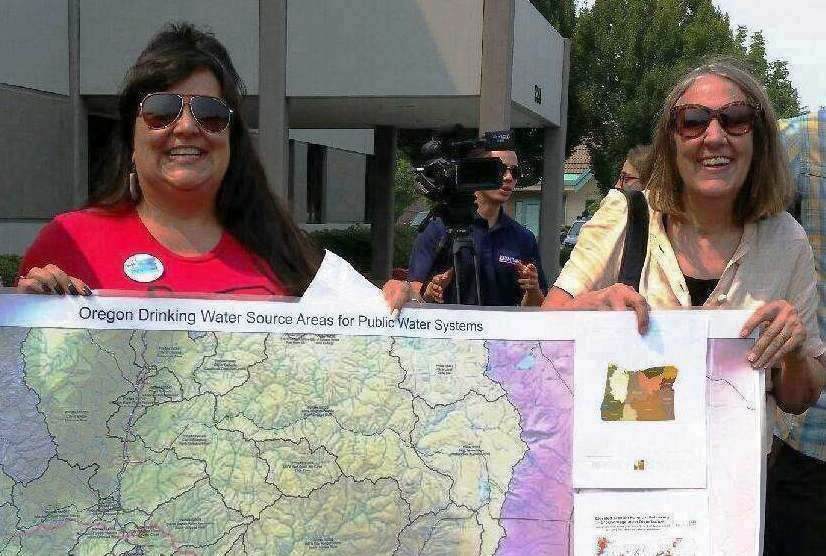 It is staggering to contemplate the damage that could be done if this project is allowed to proceed. Here are just a few of the threats posed by Jordan Cove/PCGP:

Threats to a Stable Climate

Jordan Cove, if built, is predicted to be the single largest industrial source of greenhouse gases in Oregon. The project would be a significant new source of methane, which has 86 times the heat-trapping characteristics of carbon dioxide. Methane, from the point of extraction through the entire pipeline route, will leak from seals, valves, and connections. Methane will also be released through deliberate venting during routine operations and maintenance. These ‘blowdowns’ typically release 90 to 180 foot plumes of gas and can last as long as three hours.

We’re experiencing the global public health crisis of climate change and are now engaged in a life or death struggle for a livable planet. We cannot look at the Jordan Cove project and the pipeline in isolation — it will contribute significantly to this global climate emergency. We know that it’s necessary to make immediate changes to our human activities to accelerate the transition to an emission-free economy. In order to make this transition, we must invest our resources in clean renewable sources of energy, not in dangerous fossil fuel infrastructure.

Destruction of sacred places, including burial grounds, would be a permanent consequence of this project, further traumatizing many tribes. Negative effects of the project on waters, including Coos Bay and the many rivers, streams, and wetlands on tribal lands, would further increase the health disparities that tribal communities already face. These impacts include the loss of tribal fishing and hunting, degradation and contamination of soil and water, destruction of farmland, and contributions to global warming, which disrupts and destroys ecosystems.

This project would directly harm over 480 Oregon rivers and streams by cutting trenches to lay down a 36” diameter pipeline and clear a permanent 75-95 foot right-of-way. This means clearcutting over streams and through forested watersheds, blasting hillsides, building new roads, damming and diverting water, endangering species and permanently destroying their habitat.

The iconic Rogue, Umpqua, Coquille, Coos, and Klamath Rivers face a different set of threats related to drilling beneath the riverbeds, increasing a threat of accidental ‘frac-outs,’ which can dump toxic pollutants into salmon streams and clean drinking water. Oregon PSR has documented the potential risks to municipal drinking water systems. Over 156,750 Oregonians rely on this water. Many systems are already sensitive to erosion, turbidity, microbiological contamination, nutrients, and harmful algal blooms, such as the one that shut down Salem’s water supply this summer.

Residents and businesses that could be threatened include those in the City of Coquille, Myrtle Point, Myrtle Creek, Medford, Eagle Point, Central Point, Jacksonville, Phoenix, Talent, Shady Cove, Anglers Cove, Tri-City JW and SA, Clarks Branch Water Association, Lawson Acres Water Association, Glendale, Roseburg Forest Products – Dillard, and the Winston Dillard Water District. Many more drinking water sources could be damaged if a wildfire or fire from construction and/or operation of the pipeline were to burn the large Rogue, Umpqua, Coquille, Klamath, and/or Coos watersheds.

The Oregon Nurses Association is one of the many groups opposing this project. Its letter to Oregon DEQ states: “Loss of forest canopy could also raise the temperature of drinking water sources, increasing the risk of harmful algal blooms like cyanobacteria which can be toxic and, in certain cases, lethal to people, livestock, fish and wildlife. These activities, along with proposed use of herbicides to retard vegetation in permanent wide swaths, will increase risk…”

The proposed project and gas pipelines would be located in and near Coos Bay, in areas predicted to suffer the most destructive seismic incident and tsunami in US history. Siting an explosive LNG export facility in such a seismically active area is dangerous. We are at very high risk of experiencing these catastrophes during the lifetime of the proposed facilities. Consider that the LNG/LPG storage plant in Chiba, Tokyo Bay, Japan was cracked by the Tohoku-Fukushima earthquake, producing a fireball and blaze that took 11 days to extinguish.

Our Healthy Climate Action Team will work to deny permits and permanently halt these plans, and we will be calling on you to join us in these efforts. We will not allow a handful of corporate executives in Canada to degrade our waters, exacerbate environmental injustice, threaten our health and safety, and destabilize our climate. We call on Oregon and US elected officials and agency decision-makers to do everything in their power to protect our clean, stable, and healthy future.

Photo above of Taylor Tupper of the Klamath Tribes and Regna Merritt rallying against fracked gas in Medford.