An Update on Mustafa 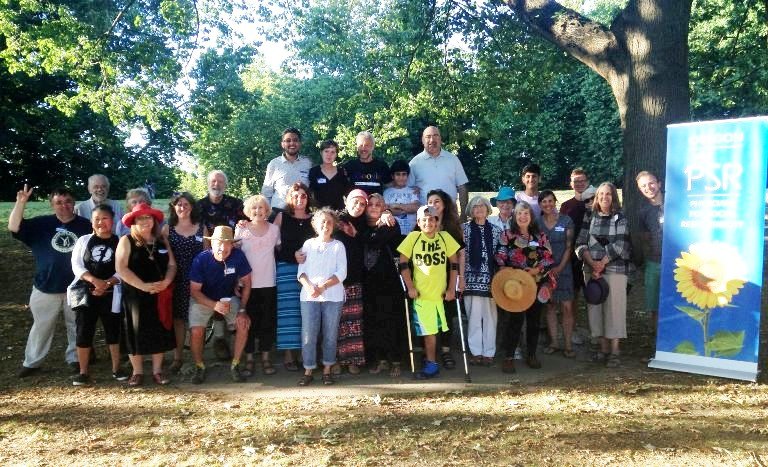 As you may know, Oregon PSR has worked with an amazing group of volunteers to bring Mustafa, who was seriously injured as a small child by the explosion of a US bomb in Fallujah in 2002, to Oregon for much-needed medical treatment. Thanks so much to all of you who have supported these efforts! We wanted to give you an update on Mustafa, whose situation clearly illustrates the unacceptable human health effects of war.

After arriving in Portland in April of this year, Mustafa had a protracted convalescence over the summer following his initial surgery in Eugene on June 12th and a second, much more complicated surgery a week later for intestinal complications from the initial injury. He was able to attend the July 19th Oregon PSR summer picnic (pictured above) the day that he was discharged after a 5-week stay in Eugene for his recuperation. Now we have some great news — Mustafa feels totally well!

A very generous member of the Timbers ‘family’ donated an adaptive hand-powered bicycle, which was presented to Mustafa at an event in mid-August. It was a fun moment to see him realize his dream of being able to ride a bicycle. It will be a huge help for him when he returns to Iraq, as he has a long trip to and from school and we are hopeful that the bike will make his regular school attendance easier.

Mustafa is now volunteering at Lincoln High School and at the Oregon PSR office. His English is improving daily. He enjoys taking his bicycle on excursions, riding further out each day.

Mustafa’s mother, Nidhal, also had surgery on her arm in September to repair the damage that she suffered in the initial blast in 2002. She is hoping to regain more function of her hand and have resolution of her chronic pain.

Mustafa has made new friends within the Arabic-speaking community in Portland, as well as with his fellow students. Mustafa continues to win the hearts of all who meet him, and we are honored to have played a role in securing his treatment.

or donate to the Mustafa Abed fund at Without Borders.

Photo above of Mustafa (front, center) with Oregon PSR members and supporters at our summer picnic in July.