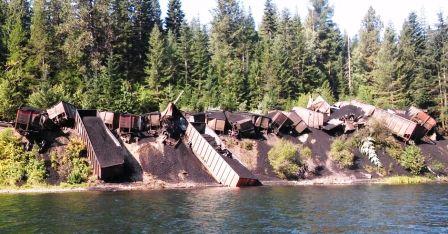 We’ve celebrated each permit denial and each withdrawal of an application for a new coal terminal, but after multiple denials for the terminal proposed in Longview, WA, Big Coal and its venture capitalists did not go silently into the night. Emboldened by the pro-coal Trump administration, Millennium Bulk Terminals (MBT) is aggressively pushing its dirty project on a bigger stage. We are holding them off.

Health, safety, and environmental justice is threatened by MBT. On October 12th, a majority of the Cowlitz County-based Health Impact Assessment (HIA) Steering Committee advised that the MBT project should not go forward. This project would move 44 million metric tons of coal from Powder River and Uinta Basins each and every day through the Columbia Gorge in Washington and Oregon. This translates to 16 mile-and-a-half long, uncovered coal trains rolling to and from a terminal with an uncovered pile of coal 8 stories high and 40 football fields wide.

Despite multiple Washington State agency permit denials based on threats to public health and the environment, MBT proponents flatly deny its unmitigable health impacts. Oregon PSR staff and volunteers witnessed this in years of tense meetings as we engaged with the HIA Steering Committee.

MBT has pulled in allies. Cowlitz County, six national trade organizations, and six states support court challenges of permit denials. The State of Washington and the Cowlitz County Hearings Examiner have allies, too, including intervenors from Power Past Coal represented by Earthjustice. Today, one quarter of all US states are engaged in the MBT legal battle.

In Washington DC, Sen. Barrasso (R-WY) introduced legislation to gut the Clean Water Act to prevent states from applying CWA 401 rights to defend residents from projects that pollute and harm public health. That legislation did not move, but we expect it to be re-introduced in the next session of Congress.

Finally, on October 15th, Interior Secretary Zinke announced the administration’s intent to ship coal exports from west coast military bases. While this is a dangerous and ill-conceived idea, we now must take it very seriously.

Oregon PSR and the Power Past Coal coalition will continue to defend the rights of states, tribal nations, and communities most impacted by environmental injustice to a healthy and safe environment. Stay tuned!

Photo above of a coal train after derailing into the Clark Fork River in western Montana.