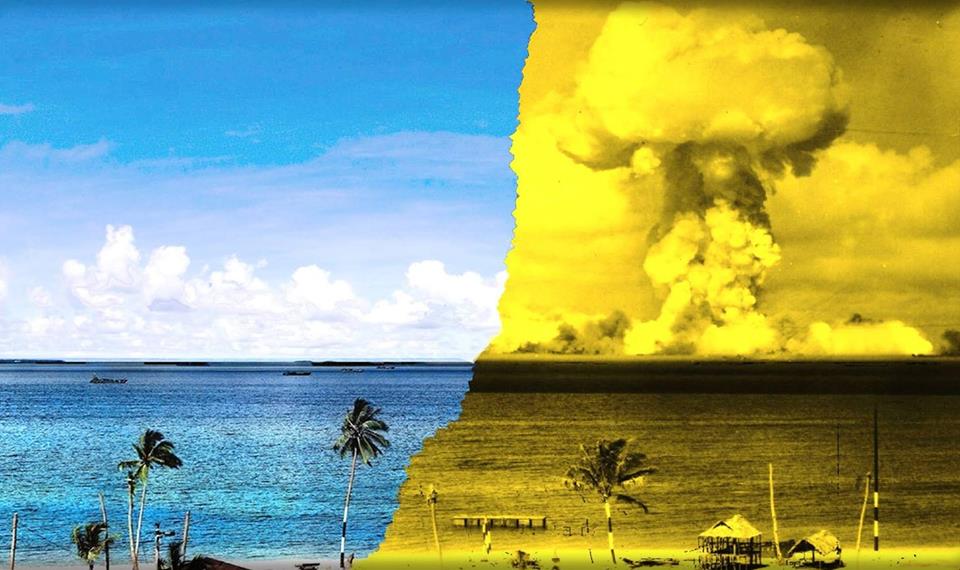 Thanks so much to everyone who attended and supported Facing America's Nuclear Legacy: Hiroshima, Nagasaki, & the Pacific Islands, our Monday, August 6th memorial event honoring the lives lost to atomic weapons in Japan in 1945 and in the Pacific Islands due to nuclear weapons testing throughout the Cold War. There was great turnout for the event, and we appreciate everyone who came out to honor the lives destroyed by nuclear weapons, learn more, and get involved in Oregon PSR's work for a world free of the threat of these morally unacceptable weapons of indiscriminate mass destruction. 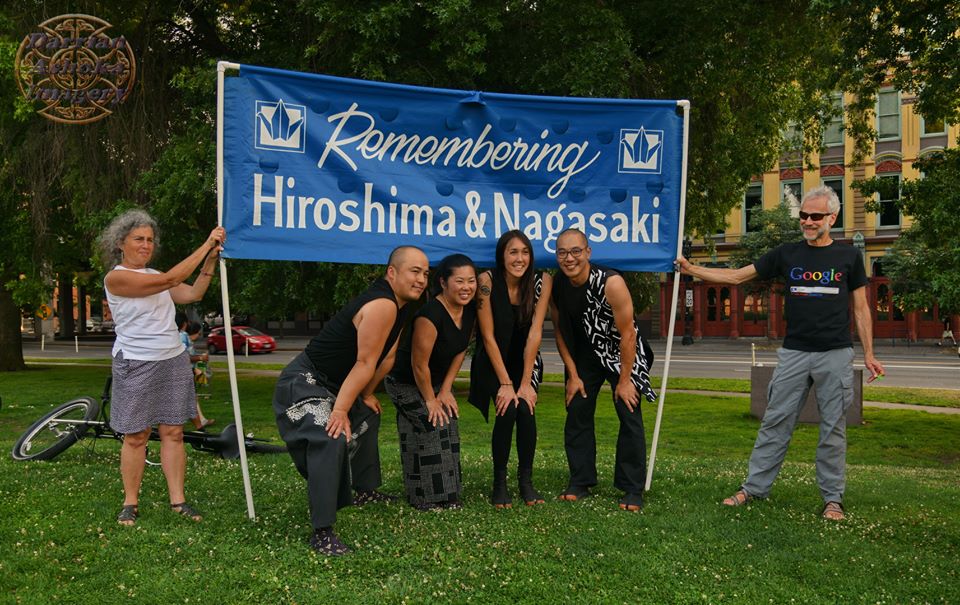 Our event host, Jesse Gasper, President of the Oregon Marshallese Community and the Oregon Bikini Association, opened the event, held at the Japanese American Historical Plaza on the Portland waterfront, inviting the Unit Souzou taiko ensemble (members pictured above, center) to take the stage. Unit Souzou gave an electrifying performance, the deep booming of their taiko drums echoing along the riverfront and inviting curious passersby to stop and listen. 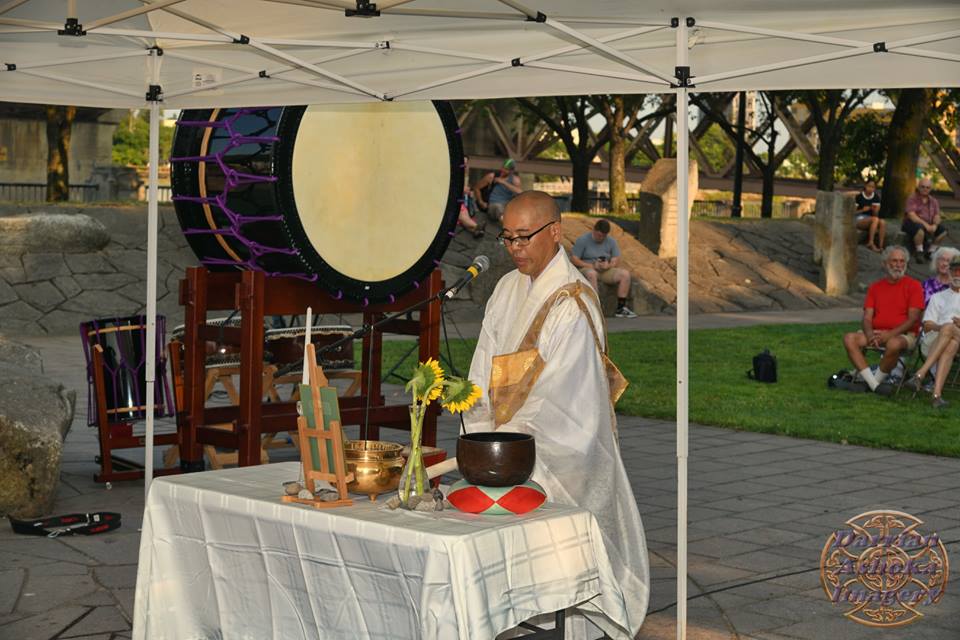 Then, we were honored by an opening invocation by Reverend Eisei Ikenaga (pictured above), head priest of the Nichiren Buddhist Temple of Portland. Rev. Ikenaga performed a traditional Buddhist o-shoko ceremony and invited the assembled audience to reflect on the lives lost to nuclear weapons, setting an appropriately reverential tone for the evening's event. 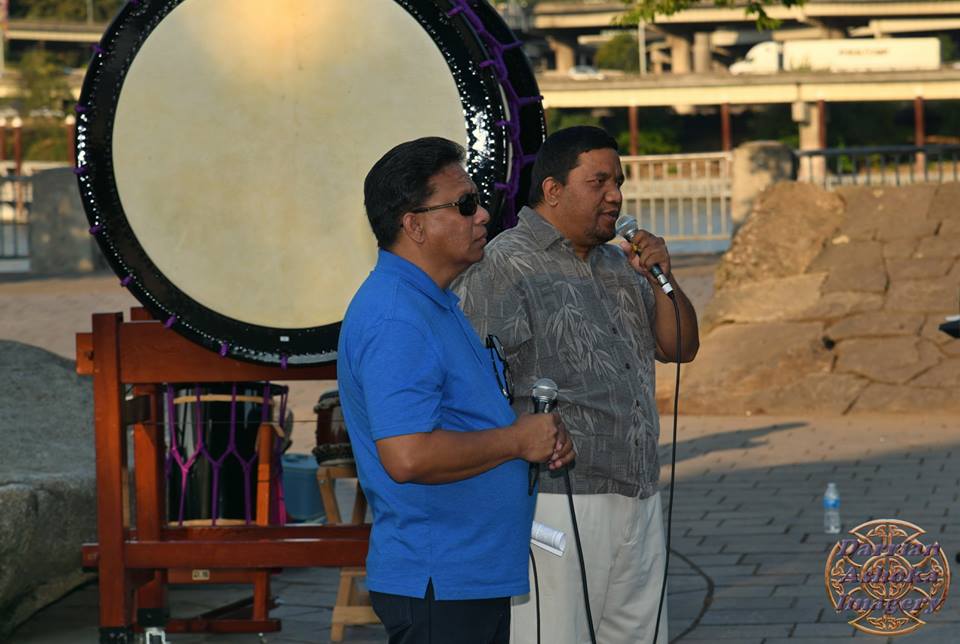 Following the taiko performance and opening invocation, Jesse introduced our first speaker, Bob Johnson, Board Member of the Oregon Bikini Association (pictured above, left). Working with an English-speaking translator, Bob spoke movingly about the impacts of nuclear weapons testing in the Pacific Islands. From 1946 through 1996, more than 300 nuclear weapons test explosions were conducted throughout the Pacific Islands, with profound and long-lasting environmental, human health, and cultural impacts. Pacific Islanders have been at the forefront of international efforts to ban nuclear weapons. Bob shared his personal, first-hand perspective with our audience, who we hope were inspired by his words to join our efforts for nuclear disarmament.

We were extremely honored to have the entire event communicated to our audience through sign language. Our most sincere appreciation to the ASL interpreter who volunteered to sign for our audience! Our thanks, too, to Tojil and Pedrito Sosa, who folded scores of origami cranes, a symbol for nuclear weapons abolition, and handed them out to our audience. 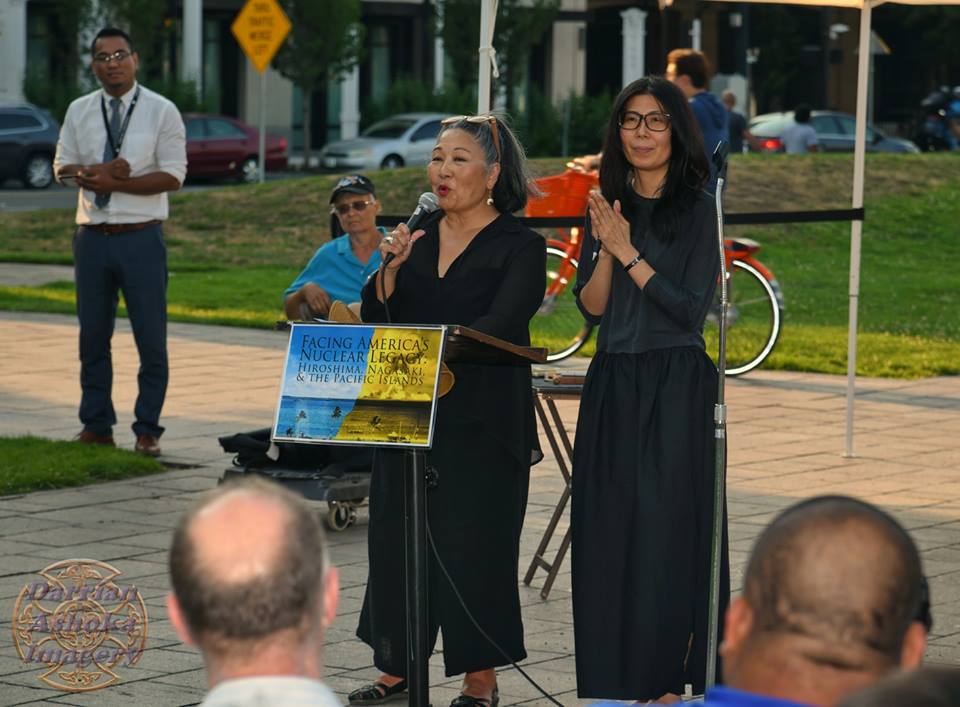 After Bob Johnson spoke, artists Yukiyo Kawano and Chisao Hata (pictured above, right to left, with event emcee Jesse Gasper), an Oregon PSR Advisory Board member, spoke about the Children Remember: Nuclear Stories Through Memories, Relationships, and Art event, which immediately followed our event at the waterfront. Children Remember is a powerful, evocative collaboration between high school students and hibakusha, atomic bomb survivors, living in Hiroshima. A year-long conversation between the students and the hibakusha resulted in a series of paintings depicting the memories of those who survived the August 6th bombing of Hiroshima and the bombing's aftermath. In addition to the paintings being on display, the event also included a live-stream conversation with hibakusha Keiko Ogura, who spoke to us about her experience of the bombing direct from the Hiroshima Peace Memorial Museum. The event also featured a live koto musical performance by Mitsuko Dazai-Church. 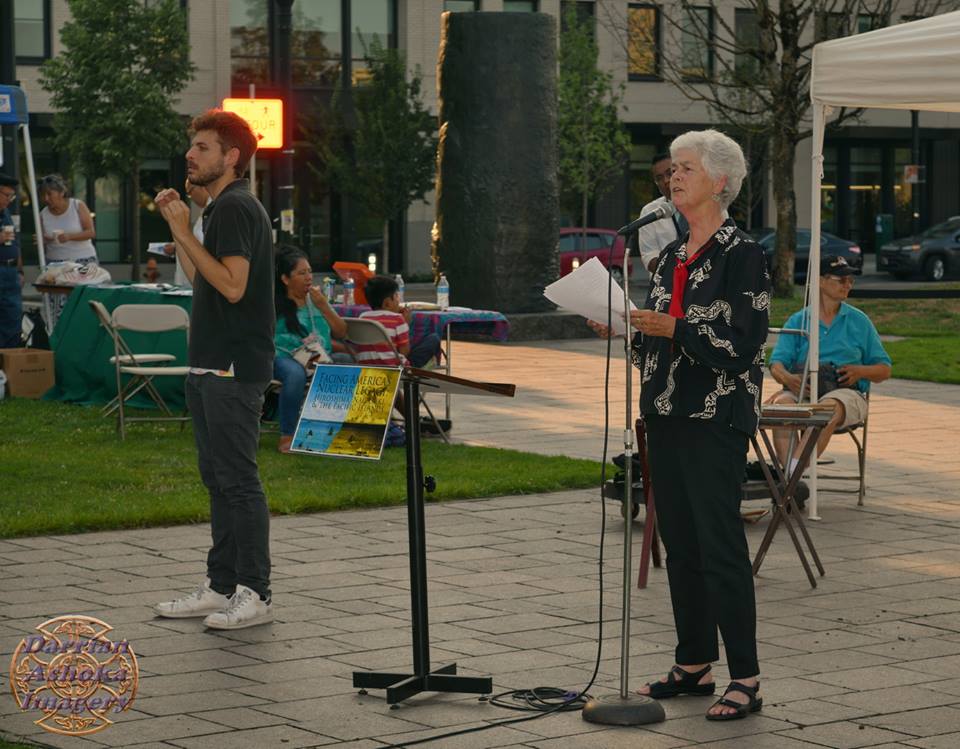 At the waterfront, we next heard from Hanford downwinder Patricia Hoover (pictured above, along with the ASL interpreter), who read the poem August 6 by critically acclaimed poet Janice Mirikitani. This powerful poem speaks directly, and heartrendingly, to the tragedy and horror of the bombing of Hiroshima. As a Hanford downwinder whose health has been negatively impacted by exposure to radiation from the Hanford Nuclear Reservation in Richland, Washington, where materials for the bomb used at Nagasaki were developed, Patricia's personal connection to the story of nuclear weapons use in Japan in 1945 made her reading of the poem all the more evocative. 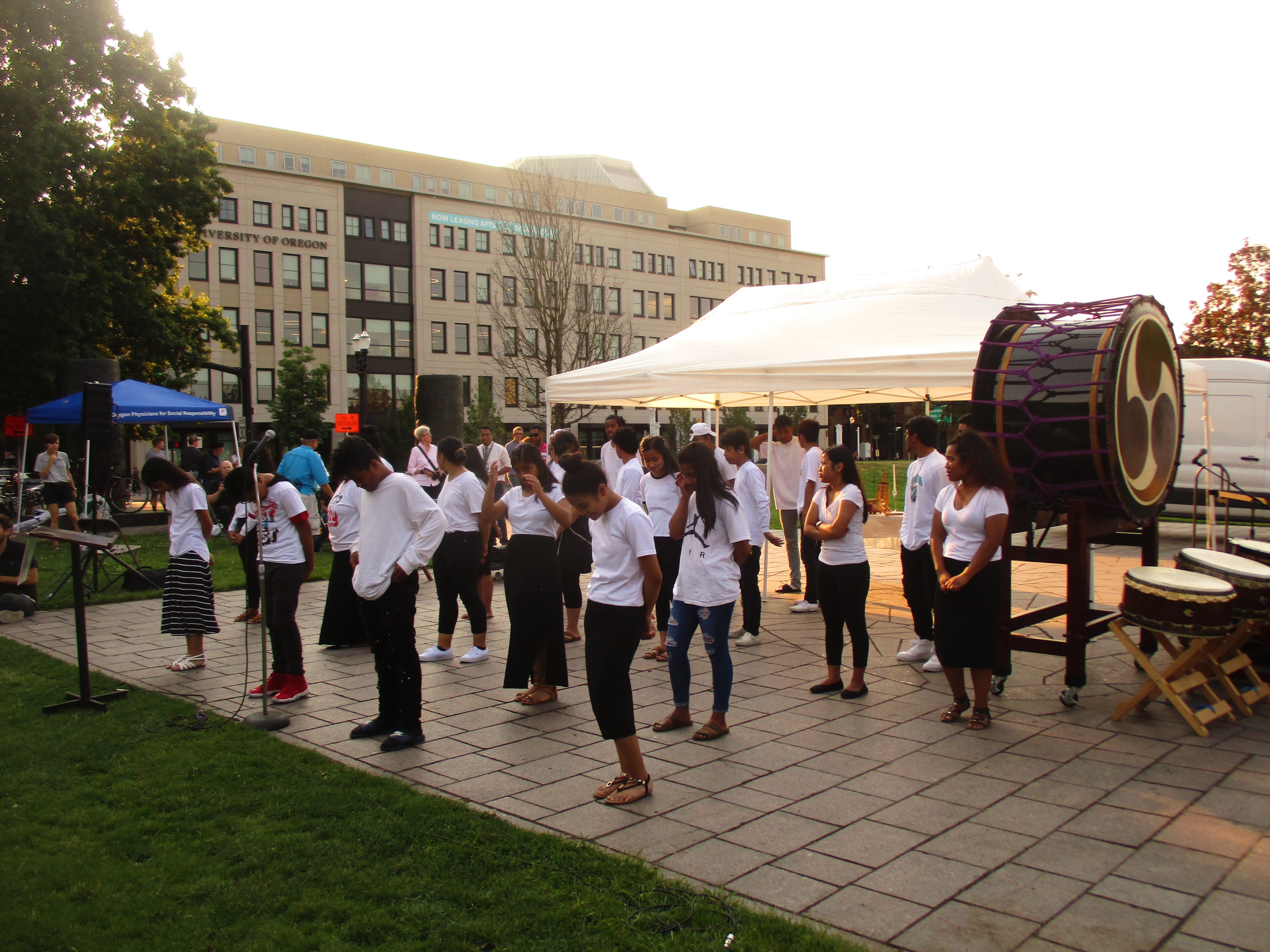 Following Patricia's reading, we were treated to a dance performance by a group of Pacific Islander youth. These young performers reminded us of the humanity we share with the peoples of the Pacific Islands, a region of the world that remains vibrant and hopeful despite decades of catastrophic nuclear testing. The smiles on their faces and the joy in their movement served as reminders of why Oregon PSR does our work for nuclear weapons abolition: so that these and other young people can grow up in a world free from the decades-long threat of nuclear annihilation. 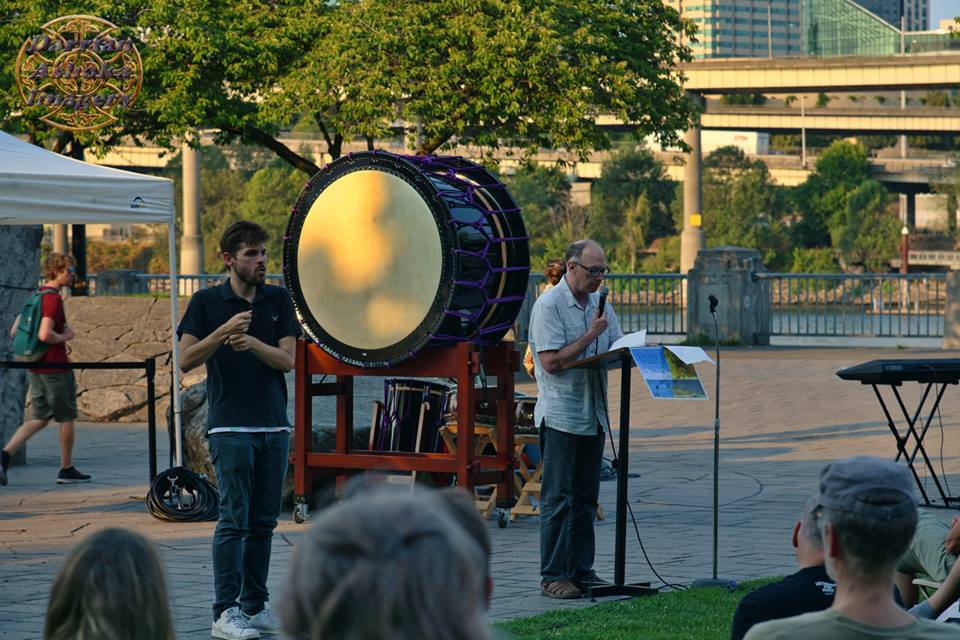 After the dance performance, our final speaker for the evening, Martin Hart-Landsberg (pictured above, right), Professor Emeritus at Lewis and Clark College, discussed the historical background and recent developments with regard to the nuclear weapons relationship between the United States and North Korea. Martin spoke of the failures of diplomacy and policies that have led to the current situation, wherein the people of North Korea suffer as a result of sanctions while the nation's government continues to press ahead with nuclear weapons production, as well as developments in efforts to denuclearize the Korean continent. Martin made it clear that continuing to push our own country's elected representatives to pursue peaceful solutions to international conflict while reducing the readiness to resort to nuclear weapons use is paramount in establishing more positive relationships between the two countries, as well as to improving the lives of the citizens of North Korea.

Emcee Jesse Gasper provided closing remarks, and then our event drew to a close with another thunderous taiko performance by Unit Souzou. Our audience members then joined a procession (pictured above), led by Rev. Ikenaga, to the Children Remember: Nuclear Stories Through Memories, Relationships, and Art event just across the street, where we continued to learn about nuclear weapons abolition while remembering the victims of both the bombs use and their testing. 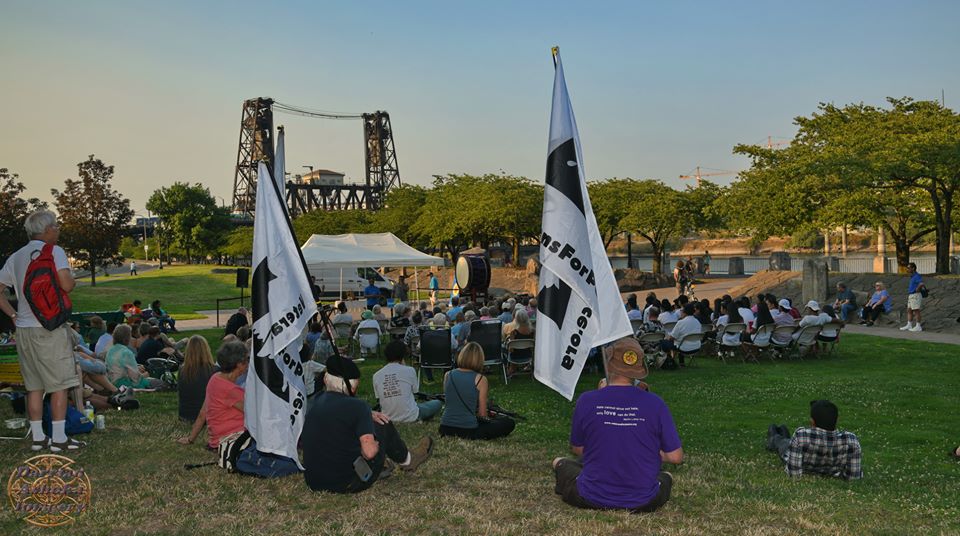 Our most sincere thanks to everyone who came out for the Facing America's Nuclear Legacy: Hiroshima, Nagasaki, & the Pacific Islands event, to all of our speakers and performers, and to everyone who supported this event through financial contributions. We couldn't have organized such a powerful, impactful event without your support and involvement. Oregon PSR is honored to lift up the voices of those affected by nuclear weapons, as well as those who are working with us for the abolition of this inherently dangerous and life-threatening technology.

Thank you all so much, and we hope that you will join us again next August for this annual event!

A huge special thanks to the event planning committee who made this event possible. Thank you!

Special thanks to our media sponsor, KBOO Community Radio (90.7 FM in Portland).

All photos used with permission of David Rich.

View the full video recording of the event!