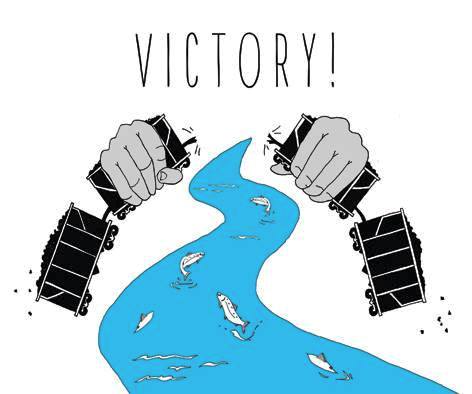 A US District Court ruled today that the state of Washington did not violate the Foreign Affairs Doctrine of the US Constitution when it denied a water quality permit for the Millennium Bulk Terminal coal shipping project in Longview, Washington. This is the second time the court has narrowed the scope of the case, leaving only the Interstate Commerce clause issue to be decided.

After the Washington Department of Ecology denied the project’s water quality permit in 2017, Lighthouse Resources (Millennium’s parent company), together with railroad giant BNSF, brought a lawsuit alleging that the decision overstepped constitutional limits on the ability of a state to regulate foreign affairs and that federal laws governing railroads preempted the state decision.

Judge Robert J. Bryan ruled that the Trump Administration’s desire to increase fossil fuel exports did not mean that coal exports were an issue of foreign policy that would justify overruling Washington State’s right to protect water quality.

“The President’s and his administration official’s generalized remarks favoring the development of the coal industry and the export of coal are not in clear conflict with the State’s decision.” Judge Bryan wrote in his decision. “Moreover, any impact the decision had on the federal government’s foreign affairs power (although it is not clear that there was any impact) would, at best, be no more than ‘some incidental or indirect effect on foreign affairs,’ which is insufficient.”

The judge’s full decision can be found HERE.

Today’s decision follows the dismissal of the federal preemption claim last December that also narrowed the scope of the case. These rulings mean that the case rests on the company’s contention that the state’s permit denials violate the “commerce clause” of the US Constitution, a clause that limits the ability of state and local governments to unfairly discriminate against out-of-state commerce to protect in-state interests.

“Today’s ruling reminds us that the sun has set on the coal industry. Instead of tying up our court system trying to trample states’ rights, industry should embrace opportunities in energy transition and economic diversification,” said Montana rancher Steve Charter, who ranches above an underground coal mine and serves on the board of the Western Organization of Resource Councils, based in Billings, Montana.

”Washington State has every right to protect itself from the significant negative impacts to health, safety and clean water that would come if this project were built,” said Regna Merritt, co-director of the Power Past Coal coalition. “Communities across the West are turning to a clean energy future, not one mired in a dirty past. It’s time for the coal industry to move on.”

If built, Millennium would be the largest coal export facility in North America, sending up to 44 million metric tons of Powder River and Uinta Basin coal per year to Asian markets that are quickly turning away from coal-fired power. Up to sixteen trains a day traveling between the Powder River Basin and Longview would have served the terminal, impacting public safety response times in rail communities across the Pacific Northwest and contributing to higher rates of cancer in low-income communities, including Longview’s Highlands neighborhood.