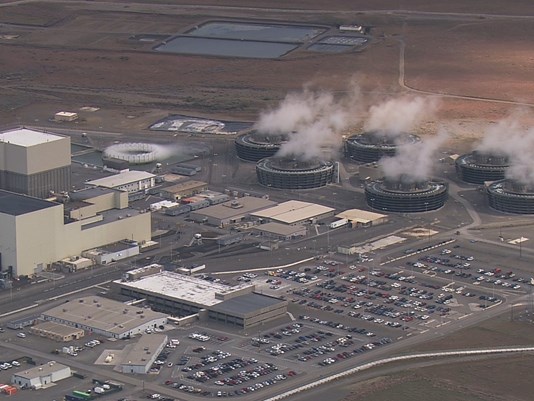 On August 20th of this year a valve in the Columbia Generating Station (CGS) nuclear power plant’s condenser froze shut, stopping its ability to cool the reactor core and forcing plant operators to rapidly shut down the nuclear plant. It remained at zero power for nearly two weeks. This loss of power generation gives us an insight into how the years have taken their toll on this aging GE Boiling Water Reactor – the last remaining commercial nuclear power facility in the Pacific Northwest.

According to nuclear operator Energy Northwest officials, the stuck valve problem was fixed within a couple of days of initial shutdown, but they discovered additional valves that needed repair. Then, when attempting to bring it back up to full power, they discovered that their coolant water contained too much iron, which can cause breakdowns in the zirconium cladding surrounding the nuclear fuel inside the reactor.

Water chemistry problems and stuck valves have been a consistent theme with the CGS nuclear reactor in recent years. This indicates that the plant, which is nearing the end of its designed life in 2023, is showing its age. The GE Boiling Water Reactor has design flaws similar to those that caused the meltdown in Fukushima, Japan, and should be shut down as soon as possible due to safety concerns.

This latest unplanned shutdown, the third within the last 18 months, comes on the heels of another failure in the Energy Northwest’s low-level waste shipping program. On August 11th, Susannah Frame of Seattle’s KING-5 News broadcast an exposé on recent repeated errors in radioactive waste shipping at the CGS. The plant had its waste shipping rights suspended by the Washington State Department of Health, the third suspension of the plant's shipping rights in the past three years.

Ms. Frame's story would not have been possible without being in contact with brave, anonymous whistleblowers at the CGS who have been reporting on problems at the plant to board members and the media for the last two years. Her reporting exposes numerous health and safety concerns at the plant dating back to 2014, including, in November of 2016, "contaminated filters arriving at the state's dump measuring a radiation level seven times greater than what was listed on the shipping manifest." "Incorrect details within the shipping manifest can increase risk to the health and safety of the public," wrote Robby Peek, Energy Northwest Quality Services supervisor in an interoffice memo.

Portland-based economist Robert McCullough believes that the growing number of breakdowns and errors at the plant may be due to pressure to reduce costs at the aging nuclear facility. McCullough’s studies have shown that the CGS costs regional ratepayers $100-200 million more annually than the cost of replacement power available on the market, and Energy Northwest itself has acknowledged that it will need to reduce its costs considerably to remain competitive.

Augmenting McCullough’s work, regional economist Philip D. Lusk recently published a market test report that suggests Pacific Northwest electricity customers could pay $1.64 billion more for power from the CGS than by purchasing it from the wholesale power market through 2028. For example, utility purchasers in Clark County and Eugene are projected to lose $66 million and $53 million respectively between 2006 and 2028 by sticking with CGS nuclear power instead of Mid-Columbia market purchases.

Energy Northwest is a publicly-owned company with seats on its board nominated by Governor Inslee of Washington and the utilities that buy its power. Now is the time for residents of Clark County, Eugene, and other local communities to contact their utilities and demand that their representatives call for a shut down of the Columbia Generating Station. Health and safety concerns, as well as economic ones, will only be finally resolved by replacing the Northwest’s last nuclear power plant with clean, renewable energy and energy efficiency.