Growing Our Movement for a Healthy Climate 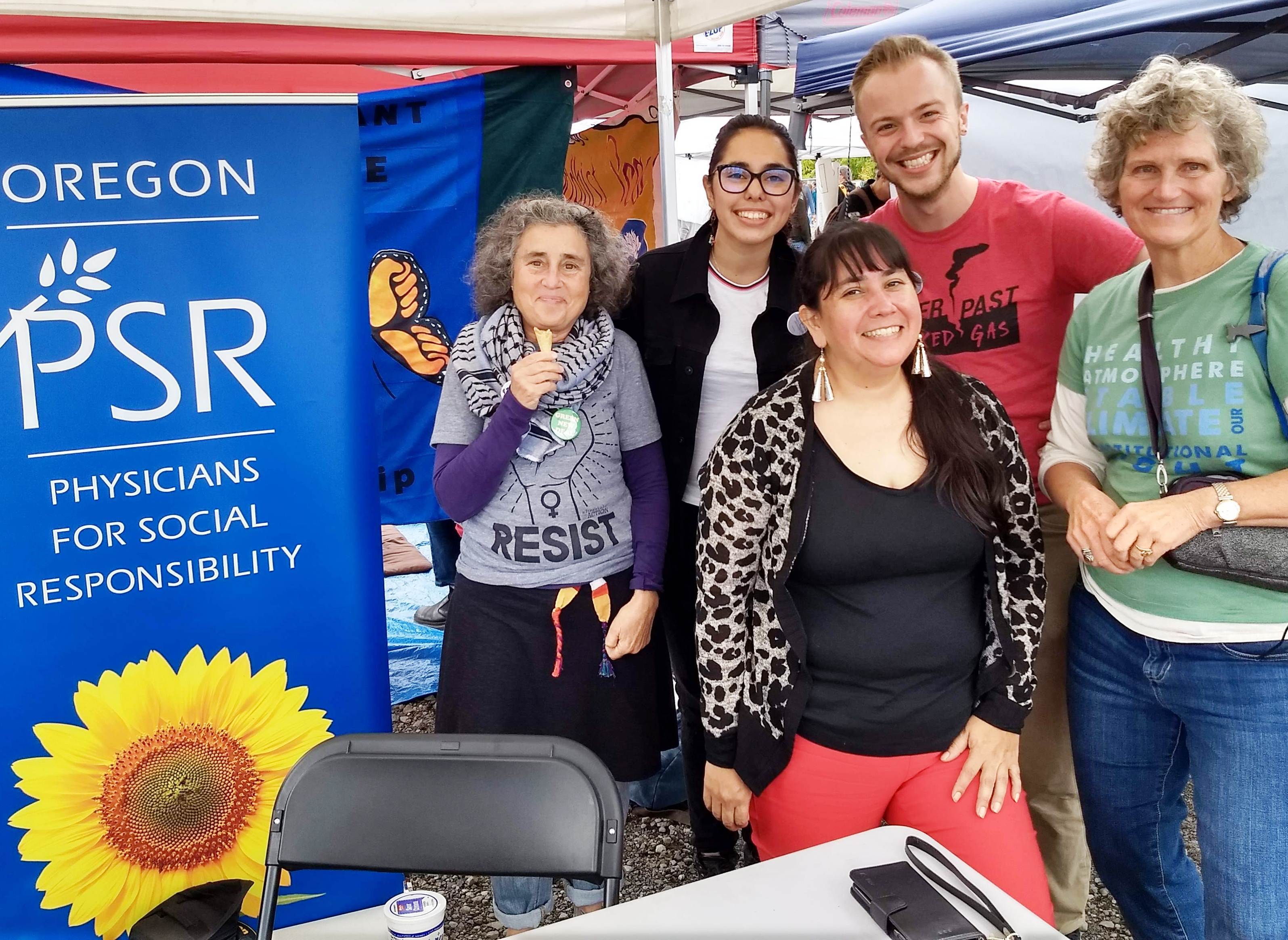 As 2019 nears an end, the call for action to address climate change has never felt clearer. Worldwide, July 2019 was the hottest month ever recorded. We heard the anguish of storm-battered island communities and despaired as huge sections of Brazilian rainforest — the lungs of our earth —burned at the hands of a far-right regime. Southern Oregonians and Southwest Washingtonians live with the frightening possibility of massive fracked gas projects in their communities. In response to these and other threats to our climate, tens of thousands took to the streets in September as young people throughout our region joined Swedish youth climate activist Greta Thunberg in striking for a livable future for all.

Pictured above: Oregon PSR volunteers and staff members table at the Climate Strike in Portland.

Our Healthy Climate Program has been hard at work to bring the voice of public health to the forefront of the movement by participating in effective coalitions and advocacy efforts to protect a healthy climate. Though the scope and complexity of climate change are immense, there is much that we can do to get closer to a healthy, sustainable world. 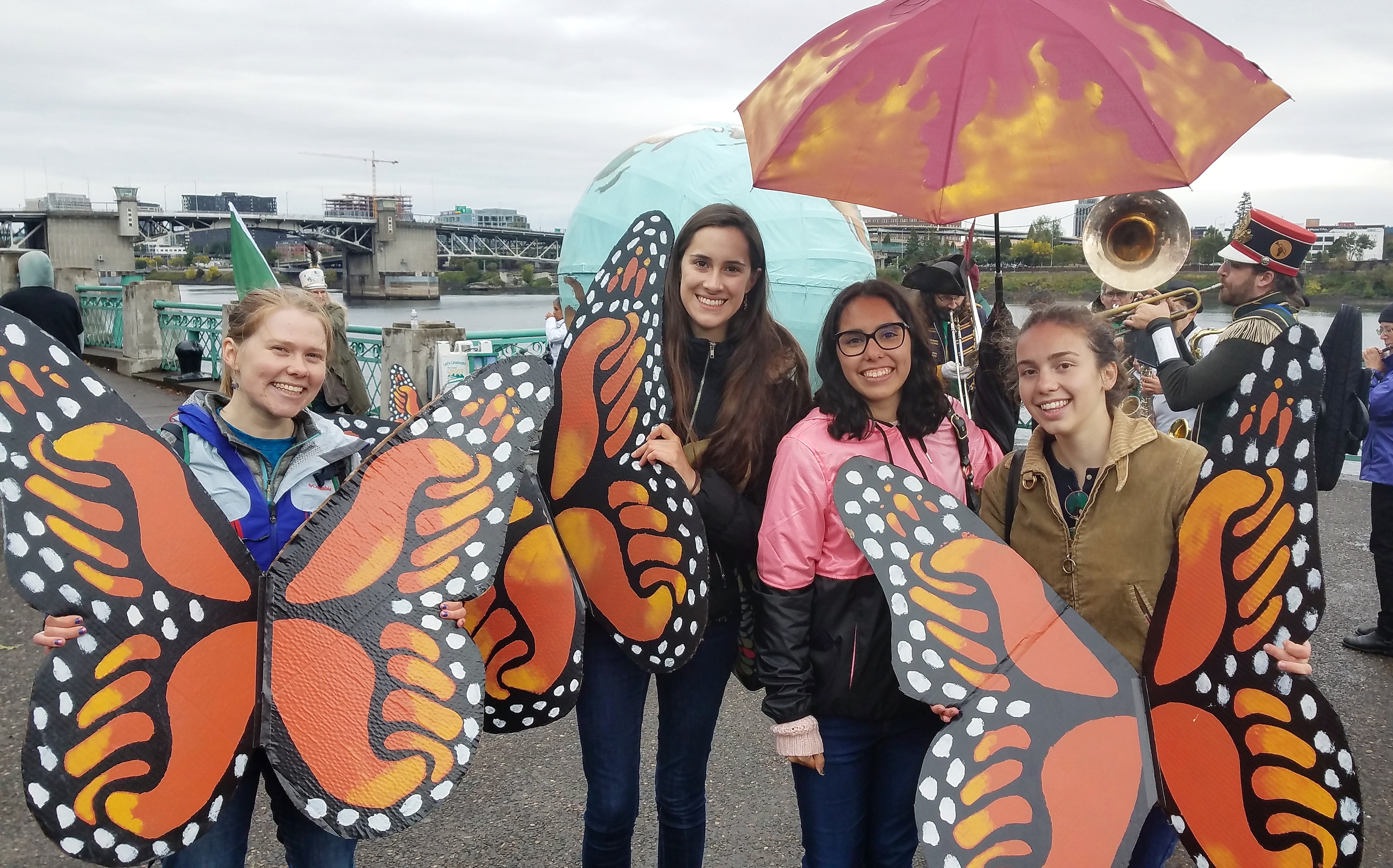 Coal, Oil, Gas: None Shall Pass!

We know that we need to halt the construction of new fossil fuel infrastructure to protect our climate, and in the past few months, we and our partners have had a slew of inspiring victories:

Washington Governor Jay Inslee changed his position on the Tacoma LNG and Kalama methanol refinery projects after hearing from Oregon & Washington PSR and partners, stating that he  “cannot in good conscience support” those fracked gas projects. After hearing from Oregon PSR and partners, the Port of Vancouver, WA approved a resolution to not pursue new bulk fossil fuel terminals. With Washington PSR, we released a resource for decision-makers and communities throughout  the Pacific Northwest entitled Fracked Gas: A Threat to Healthy Communities. The need for this report was underscored when Cowlitz County approved a shoreline permit for the proposed Kalama fracked gas-to-methanol refinery, giving the WA Dept. of Ecology 30 days to decide the fate of this climate-busting plant, which would consume more methane gas than any other Washington industry.

We’ve also been working to counter the expansion and existence of the Zenith Energy facility in NW Portland, where tar sands crude oil is being shipped to Pacific markets after traveling by rail  through Portland and Vancouver, WA. In July, we helped coordinate a turnout of over 500 attendees and five Oregon PSR speakers opposed to Zenith oil shipments at a community forum hosted by Portland’s mayor. We’ve organized frequent testimony on the public health threats posed by Zenith at Portland City Hall to apply pressure to elected officials. We continue working with partners by helping organize events like September’s 60-hour Vigil at Zenith, a mammoth effort of legal surveillance to bring attention to, and document activity at, the facility.

In a stirring reminder of the successes we’ve had and the future we seek, the Port of Longview, WA celebrated job growth in the wind energy industry after receiving parts for a wind power facility planned for western Washington. News of this uptick in the clean energy economy of SW Washington came on the heels of a court decision that upheld a key permit denial for the Millennium coal export project in Longview. It is increasingly clear that Longview has a prosperous future in clean energy, not dirty coal exports.

Despite the drama in the 2019 Oregon legislative session, we successfully advocated for the passage of new oil train safety rules, improved diesel regulations, and the blocking of subsidies and loopholes for waste incineration and nuclear power. We will collaborate with our partners to bring bold, effective climate policy to Salem in upcoming legislative sessions.

Time’s Up for Nuclear Power in the Northwest

Our Program Assistant, Madison Arnold-Scerbo, was the principal author of our new report titled Replacing Columbia Generating Station with Renewable Energy. The report lays out how decision-makers can create a plan to replace the Pacific Northwest’s only commercial nuclear power plant with clean energy and guarantee retraining programs for plant workers. We’re also educating regional stakeholders regarding the misleading claims made by NuScale Power, an Oregon-based  company that seeks to build small modular nuclear reactors in Idaho. The economic, environmental, and social costs of new and existing nuclear power make it unsuitable for the just transition from fossil fuels to clean energy that our region needs. 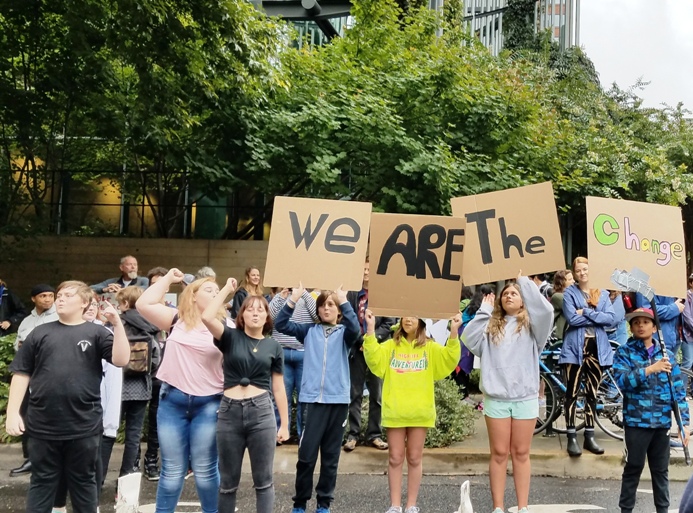 Students in Portland strike for a stable, healthy climate as part of September's global Climate Strike.

Heeding the Youth Call for Action

September’s global Climate Strike was a great opportunity for our community to come together and  take action on climate issues. We supported youth organizers in Portland by attending planning meetings, helping organizers connect to local resources, spreading the word, and participating in the events. We had Oregon PSR members and staff in the march, in kayaks in the Willamette River, at an action booth at the festival, and at the Climate Strike for Immigrant Justice action. It was inspiring  to be a part of such a well-organized, well-attended effort.

Our landslide victory, with the support of 65% of Portland voters, carried the Portland Clean Energy Fund from a years-long vision to fruition, and we are now collaborating with coalition members and city leaders to build a $54-71 million annual fund for renewable energy, job training, and green infrastructure investments, prioritizing communities affected first and worst by the climate crisis. In September, we welcomed the first five members of the Fund’s grant committee, who’ll solicit, oversee, and recommend applications for funding. These funds, which will be made available by next spring, will go a long way towards correcting existing environmental health inequalities and redirecting resources towards a just transition from an unhealthy fossil fuel economy to a sustainable,  climate-protective one.

We were thrilled to hire Lluvia Merello as our Energy Justice Organizer in May. We hope that you had a chance to send your best wishes to Regna Merritt as she began a well-deserved  retirement on July 1st. Regna spent an incredible seven years directing Oregon PSR’s Healthy Climate Program, providing leadership to secure denial after denial of regional fossil fuel projects while advancing clean energy policies. After years of working closely with Regna on a wide range of projects, I am excited and honored to step into the role of Healthy Climate Program Director and build upon her momentum for a stable and healthy climate.

We could not do this work without your involvement and your financial support. I hope that you will join me in this work and consider inviting a friend to donate to support our unique public health voice for the climate. Together, we will continue to work for a healthy climate and a livable future for all.