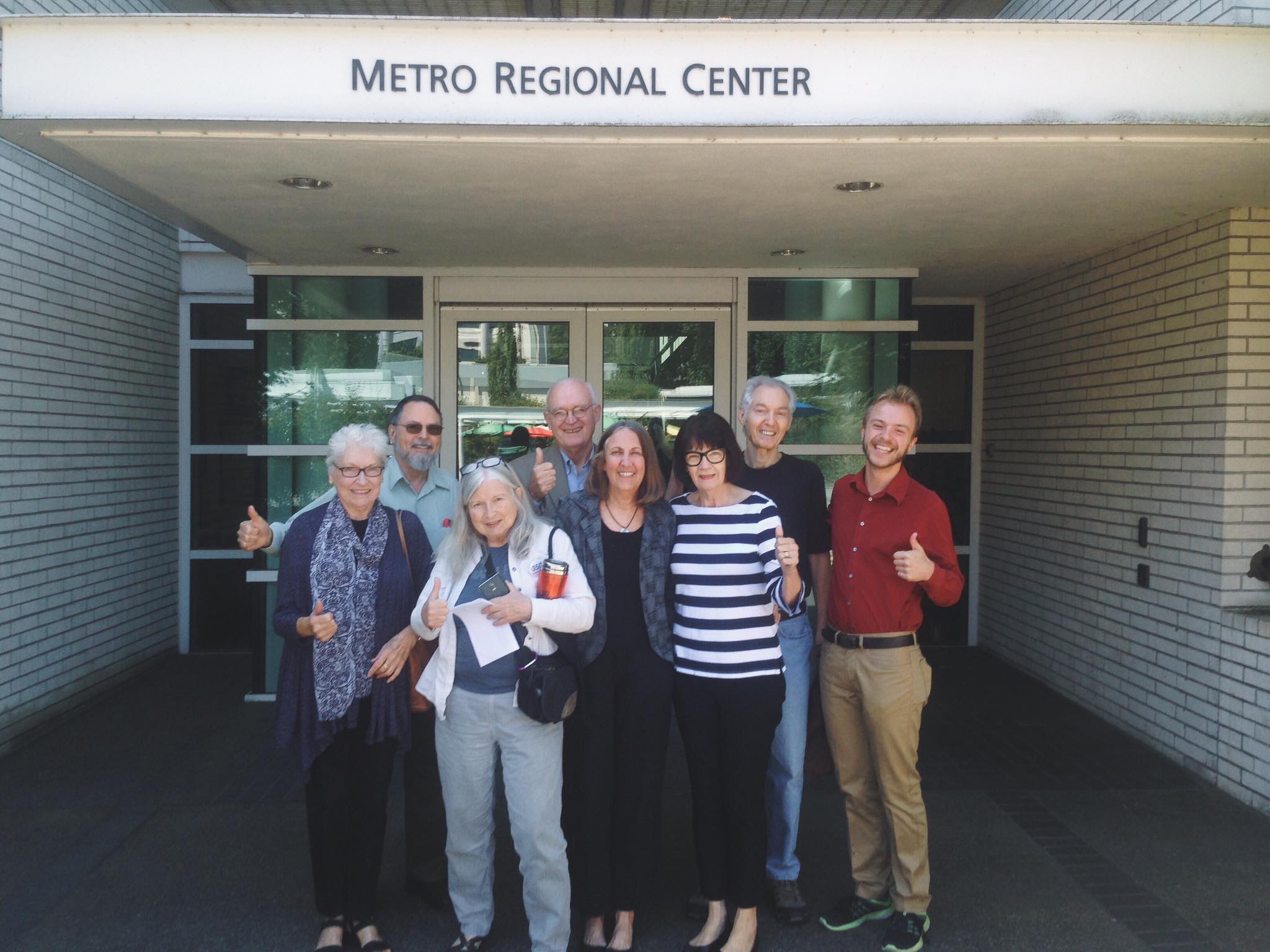 Oregon PSR and 350 Salem after the Metro Solid Waste Alternatives Advisory Committee heard testimony in opposition to sending 200,000 tons of the Portland area's trash to the Covanta Marion Waste-to-Energy incinerator in Brooks, OR.

On August 8th, health, environmental justice, and community groups celebrated as the Metro Council voted to proceed no further with a proposal to send 200,000 tons of waste per year to the Covanta Marion incinerator in Brooks, OR. The amount equals one-fifth of the tri-county area’s solid waste, and waste-to-energy plants produce even more pollution and global warming emissions than coal plants per unit of electricity produced. Fifteen organizations including Oregon PSR, the NAACP Portland Branch, and Neighbors for Clean Air sent a letter to the Metro Council last week urging them to abandon the proposal.

August 8th, 2017 (Portland, OR) – This afternoon, health, environmental justice, and community groups celebrated as the Metro Council voted to proceed no further with a proposal to send 200,000 tons of waste per year to the Covanta Marion incinerator in Brooks, OR. The amount equals one-fifth of the tri-county area’s solid waste and would have emitted high levels of air pollution and greenhouse gas. Fifteen organizations including Oregon Physicians for Social Responsibility (PSR), The NAACP Portland Branch, and Neighbors for Clean Air sent a letter to the Metro Council last week urging them to abandon the proposal.

"Waste-to-energy incineration is an outmoded, dirty, high-carbon technology that is inconsistent with the climate action, environmental justice, and sustainability policies embraced throughout our region,” said Joseph Miller, PhD of Oregon Physicians for Social Responsibility and the Metro Stakeholder Advisory Group for the project’s Health Impact Assessment. “Today's decision allows Metro to more intensely focus on its excellent waste reduction, reuse, recycling, and composting programs, and its current emphasis on getting food scraps out of the waste. No one likes landfills, or the air emissions produced by them or by transporting waste to them, but the way to reduce both is to reduce our total waste as well as food scraps waste."

“The NAACP Portland Branch appreciates Metro’s process to include community members in the review of the consultants recommendations. Unfortunately the recommendation that was under consideration ignored frontline communities most impacted by this plant,” said Jo Ann Hardesty, President of the NAACP Portland Branch. “We commend Metro Councillors for rejecting this proposal to expand Covanta. We look forward to working with Metro on developing a more equitable solution that incorporates our clean energy objectives.”

"We have learned so much over the last year about what was not understood about potential health risks from air toxics,” said Mary Peveto, President of Neighbors for Clean Air. “The emissions from burning anything, especially the problematic mix of waste material, creates untold and nearly unmeasurable risk for anyone in its path. This should be a last resort option."

Based upon U.S. Environmental Protection Agency data, waste-to-energy incinerators produce more pollution and global warming emissions per unit of electricity produced than coal-fired power plants. Communities that already face socioeconomic and health inequities, which include youth, elders, people of color, and low-income communities, would have been most severely impacted by the proposal. Waste-to-energy still requires landfilling since one ton of incinerator ash is produced for every four tons of solid waste burned.

The proposal was considered not long after the City of Portland and Multnomah County both made strong commitments to renewable energy on June 1st, 2017 that specifically excluded incineration of municipal waste from their definitions of clean, renewable energy. Metro Council President Tom Hughes also joined Portland Mayor Ted Wheeler, Multnomah County Commission Chair Deborah Kafoury, Beaverton Mayor Denny Dole, and Milwaukie Mayor Mark Gamba in signing the "We Are Still In" letter to the international community. The letter affirms that, despite the actions of the Trump Administration, they and many other "mayors, governors, college and university leaders, businesses, and investors are joining forces for the first time to declare that we will continue to support climate action to meet the Paris Agreement."

Guided by the values and expertise of medicine and public health, Oregon PSR works to protect human life from the gravest threats to health and survival. Locally, the Portland NAACP is focusing its efforts on economic equity, police accountability, and leadership development. Neighbors for Clean Air works to make public health a priority in Oregon’s air quality standards and programs for toxic emissions.