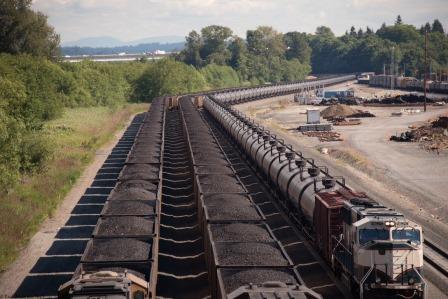 Cowlitz County officials have just released a draft Health Impact Assessment (HIA) for the Millennium project, the largest and most dangerous coal export proposal remaining in the US. It's time for them to hear from you!

The good news? While it states no conclusions, the draft HIA clearly reaffirms many terrible adverse health and safety impacts of the proposed Millennium Bulk Terminals project in Longview and Cowlitz County.

These were earlier identified by the Washington Department of Ecology, which denied a key water quality permit in October. The draft HIA documents cancer and cardiac risks, risks to those with pre-existing medical conditions, risks to low income and minority communities - plus detailed health concerns associated with our warming climate.

Millennium's backers don't like this and will be pushing back - so let's let them know what we think today! (Detailed comments are also very welcome and are due by 5:00 PM on January 5th.)

The HIA stemmed from demands by YOU and over 4,000 medical professionals and public health advocates for a more extensive review of the health impacts of the project. Cities in Montana, Idaho, Oregon and Washington called for disclosure of potential threats to human health and safety. YOU made that happen - thank you!

But the study was ultimately left in the hands of Cowlitz County, which has now intervened in lawsuits on behalf of the project’s backers. The County chose early on to drastically limit the study’s scope to areas in Cowlitz County along the track, and near the proposed terminal. Nonetheless, the draft, with input from the WA Department of Health, underscores the findings of the state’s more thorough review.

Your comments will be considered by the HIA Steering Committee when they meet in January. They want to know what you think! Millennium will turn out their supporters in January to weaken the direction and impact of potential recommendations.

The way to protect our health and the health of our planet is to PREVENT construction of this dirty and dangerous coal export facility. The HIA, while not a legal tool, can help inform and strengthen future decisions. Thank you in advance for submitting comments!