Hope for a Healthy Climate in Challenging Times 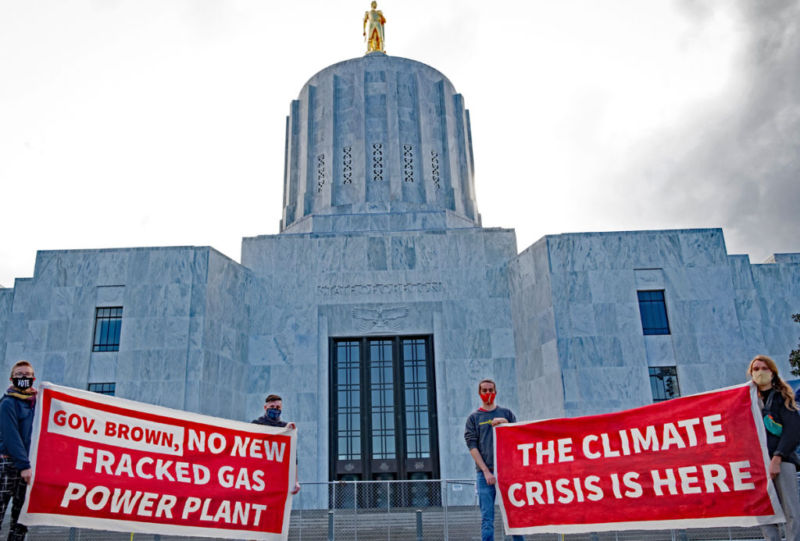 It is a little staggering to reflect on everything that has happened over the past year: wildfires and ice storms destroying communities in Oregon and beyond and demonstrating that climate chaos is upon us; the deadliest wave of the ongoing COVID-19 pandemic and the arrival of approved vaccines; and a presidential election that signaled the end of the Trump Administration alongside a very disturbing reminder on January 6th that the violent right-wing extremism and white nationalism of Trumpism is still with us.

Not only is it wearying to continue keeping our distance from each other after twelve long months of Zoom calls, it is also very hard simply to keep up with the news of our daily societal traumas. We must also never forget that for Black, Indigenous, Latine, Asian, and Pacific Islander communities, the violent trauma of racism is ever-present in the form of hate crimes, police brutality, mass incarceration, unequal access to health care, and so much more. We need to show up and dismantle white supremacy in every space that we inhabit.

I’ll be honest, I’ve had a hard time holding on to hope these days. And yet, that’s exactly what I want to focus on here, because there are so many reasons to hold hope in our hearts. To ground ourselves amid today’s battering winds, let’s look back at what we’ve accomplished together through Oregon PSR’s Healthy Climate Program and what’s on the horizon.

The Portland Clean Energy Fund is granting $8.6 million in funds to community groups for energy efficiency upgrades, rooftop solar installations, green infrastructure projects, and job training in these fields. Over 85% of those served are from BIPOC communities, low-income Portlanders, women, and people with disabilities, and tens of millions of additional dollars will be awarded later this year. Huge thanks to so many of you who worked with us to support this groundbreaking campaign.

Jordan Cove LNG is on the ropes. The company behind the proposed fracked gas pipeline and export terminal in southern Oregon is admitting that they can no longer predict a start date for the project due to a wide array of local and state permit denials that were upheld this winter by federal agencies. While we and our partners in the Power Past Fracked Gas coalition continue to resist the Federal Energy Regulatory Commission’s approval of the project in court here in Oregon, we also stand in solidarity with the #StopLine3 resistance to stop a tar sands pipeline from cutting through Anishinaabe treaty territory in Minnesota.

Our Work in Oregon’s 2021 Legislative Session

Good policies are advancing in the Oregon Legislature, despite a multitude of challenges. We are supporting a policy to expand compassionate early medical release from Oregon prisons (SB 835) and the exciting Oregon Clean Energy Opportunity campaign to pass the Energy Affordability Act (HB 2475), Healthy Homes (HB 2842), and 100% Clean Energy for All (HB 2021). Three bad bills to exempt small modular nuclear power from Oregon’s common-sense laws restricting new nuclear power in Oregon did not get scheduled for work sessions, which means that they will not move forward this session. Although the time of COVID-19 has been challenging to work in, it is encouraging to see bipartisan support for environmental justice measures that have the potential to shift the dynamic in Salem on climate policy. See a full list of the bills we’re supporting this year.

As challenging as it has been to continue our work from our homes, it has also been joyful to work together to make a difference where we can. From defeating a Washington State permit for the proposed Kalama methanol facility in February to commemorating the 10th anniversary of the Fukushima nuclear disaster in March to celebrating the acceleration of vaccination eligibility for adults in prison custody, there are many rays of light amid the darkness of the past year. Now, as we inch closer to widespread vaccination from COVID-19, we look forward to gathering again with our partners and members to celebrate our collective victories while also mourning the immeasurable losses that our communities have suffered. Looking ahead, the federal government is finally in a position to invest in the just transition from fossil fuels to clean energy, and opportunities abound for making further progress in our movement for a healthy and livable climate for present and future generations.

We also bid farewell to our Energy Justice Organizer, Lluvia Merello, who took an exciting opportunity to work for the Portland Indigenous Marketplace, which she helped to found, in March. Lluvia contributed so much to our Oregon PSR community, including her work in the campaign to stop the Zenith Energy facility, to support sensible forest policies and resist fossil fuel projects, and to build a new partnership with the Oregon Justice Resource Center to educate and mobilize our members on the health crisis of mass incarceration. We’re so grateful for Lluvia’s time with us, and we’re currently on-boarding a new Climate Justice Organizer to help us expand upon Lluvia’s remarkable success. Mark your calendars to attend a Portland Indigenous Marketplace on Saturday, June 26th to support Lluvia’s next venture.

Thank you so much for your support of our Healthy Climate Program. To learn more and get involved, contact me at [email protected]. Stay safe, stay well, and take care!