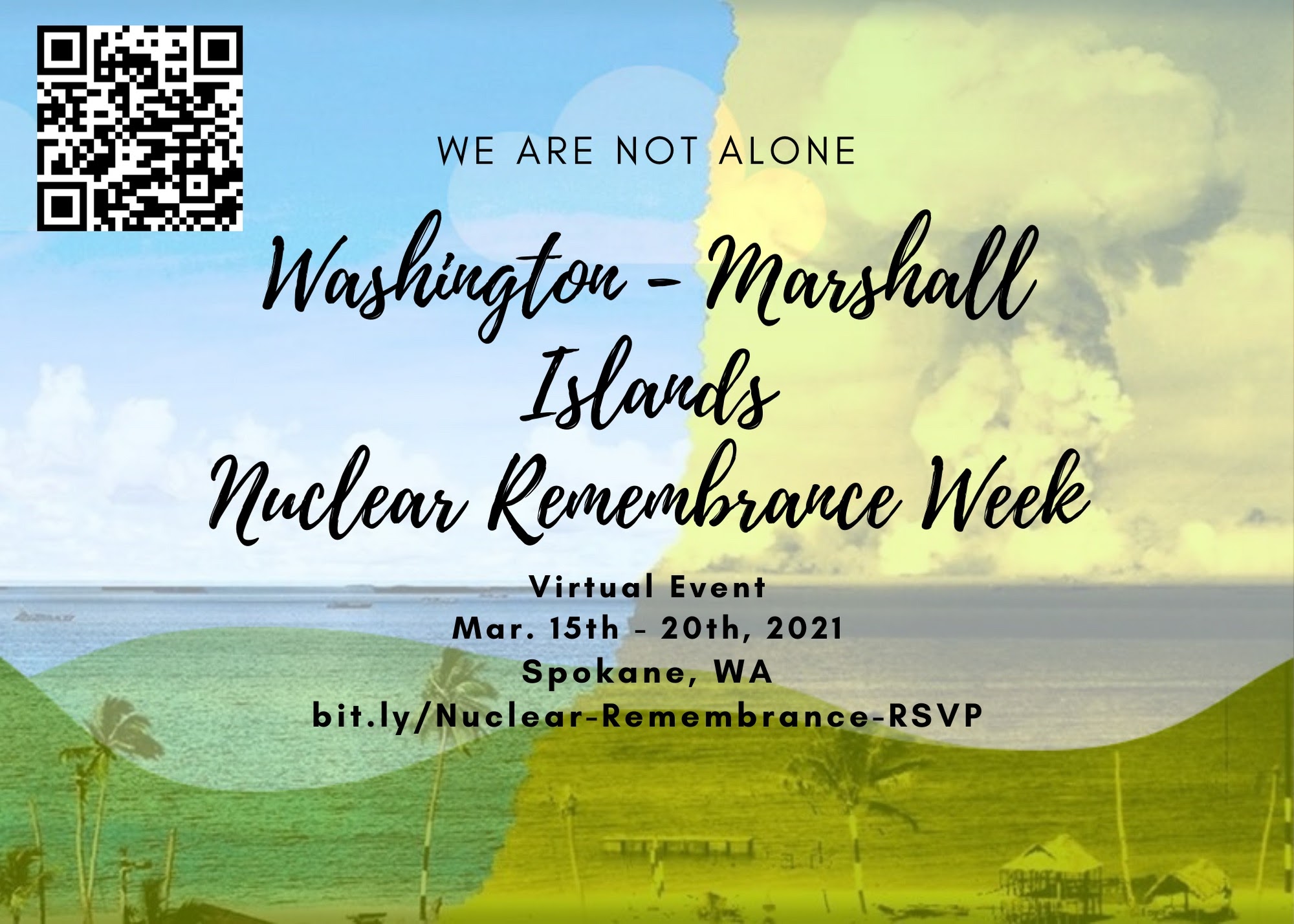 We are excited to support the 2021 Washington to Marshall Islands Nuclear Remembrance Week online event series organized by our partners at the COFA Alliance National Network - Washington (CANN WA). This series of events will explore the lasting legacy of nuclear weapons testing throughout the Marshall Islands and honor the lives, memories, and experiences of those on the front lines of nuclear weapons testing in the Pacific.

The Spokane Marshallese community will be this year's host of the Marshall Islands Nuclear Remembrance Days webinar week, with the theme “We Are Not Alone.” The week will be in solidarity with other Marshallese storytellers, Hanford and New Mexico Downwinders, Atomic Cleanup Veterans, and other impacted communities in Washington and across the nation.

Especially during this time of physical distancing, it is important to gather and make certain that these stories continue to be told and to allow a time for collective healing in remembrance of the victims/survivors to the generations that follow.

CANN WA unites Washingtonians from The Republic of Palau, The Republic of the Marshall Islands, and the Federated States of Micronesia to amplify and expand the reach of their voices through civic engagement in the movement for economic and social justice.

The series incorporates the following events:

On March 1st, 1954, the United States tested its most powerful hydrogen bomb, "Shrimp," in its Castle Bravo operation.This 15-megaton explosion devastated many communities throughout the southern Pacific. The legacy of this test is still being felt as individuals are still falling ill and the long-term impacts of the test are still being revealed.

Many residents of the islands were displaced as a result of the testing, and those who remained suffered severe health impacts from radiation exposure. For generations to come, people may continue to be displaced, suffer from food insecurity because of the irradiated land, and experience other chronic health conditions as an consequence of nuclear weapons testing in the area.

Oregon PSR celebrates the resilience and strength of nuclear frontline communities, including those in the Marshall Islands and elsewhere in the Pacific, who continue the struggle for dignity, healthy lives, and an acknowledgement of the nuclear weapons complex’s impact on their lands and people.

Due to the ongoing COVID-19 pandemic, this event will be held virtually to protect everyone's safety. The event will be hosted on Zoom, Facebook, and YouTube.

Register to attend this event for more information.