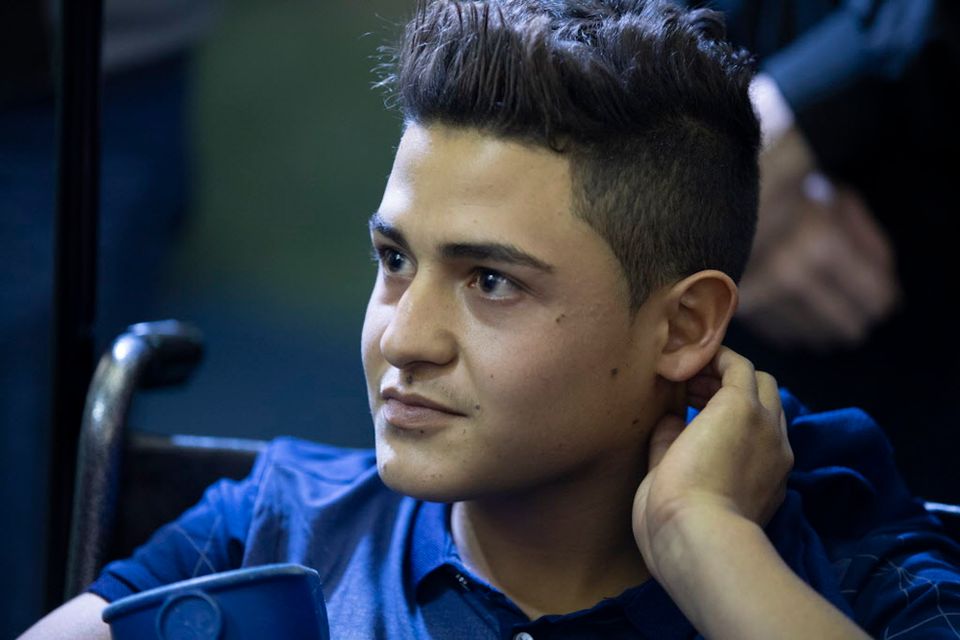 We are thrilled to announce that 15 year-old Mustafa Abed, accompanied by his mother, Nidhal, has returned from Iraq to Portland for a several month stay to obtain urgently needed medical care. Oregon PSR has been been collecting funds to support Mustafa's health needs, and we are now working with the non-profit group Palestine Children’s Relief Fund, which is officially sponsoring Mustafa’s medical care visit to Portland.

Update 5/16: Oregon PSR is now accepting donations for an adaptive bike and medical supplies for Mustafa to take home to Iraq. Visit our donation page and write "Mustafa" in the special designations field.

In the coming weeks and months, there will be multiple community opportunities to interact with and support Mustafa and Nidhal. If you would like to volunteer, email me to be put in touch with the PCRF volunteer team.

In the fall of 2008, we welcomed 5-year old Mustafa to Portland, where he received life-saving medical and rehabilitative care. At the age of 2 years, in 2004, Mustafa was severely wounded by a U.S. bomb attack on Fallujah, Iraq. He lost a leg and had injuries extending into his pelvis. He survived, but spent four years unable to walk, in severe pain and with frequent infections. The amazing doctors and medical teams at Doernbecher Hospital and Shriner’s saved Mustafa’s life and provided him with a prosthesis enabling him to walk.

When Mustafa was in Portland in Fall 2008, the city fell in love with this resilient, vibrant child. The Trailblazers honored him, and the Mayor declared Mustafa Abed Day in the City of Portland.

“Mustafa represented hope, healing, and the importance of working for peace so there are no more children injured in war,” stated Mary Lynn O’Brien, MD, a retired pediatrician and member of the team who brought Mustafa to Portland in 2008.

In the past 10 years since Mustafa was here, his family has suffered greatly in the ongoing war and poverty in Iraq. Those involved in Mustafa’s care in 2008 lost contact with the family due to the harsh realities of life in Iraq. In July 2016, Mustafa was coincidentally “found” in a NPR News Hour story.

Since that news story, the Portland group has been in touch with the family and has been working to bring Mustafa back to Portland for the medical care he needs, raising funds through Oregon PSR. NPR, through the journalist who reported on Mustafa in 2016, compiled a video entitled Finding Mustafa, which tells Mustafa’s story and the story of working to bring him back to Portland.

Read the Oregonian story about Mustafa and the Timbers!

Read the Timbers' blog about Mustafa.