Mustafa: The Story of an Iraqi Child Injured by US Bombing in Fallujah 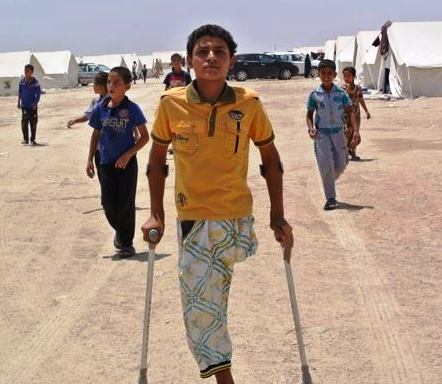 The human health impact of war is illustrated by the experiences of Mustafa, an Iraqi child severely injured by US bombing in Fallujah.

In 2004,​ the US military heavily bombed and assaulted the Iraqi city of Fallujah. Mustafa, a healthy 2 year old, had a slight fever and his mother ventured out during a lull in the bombing to take him to the doctor. A US bomb hit a building they were passing and shrapnel and debris hit Mustafa and his mother. He was blown out of his mother's arms and gravely wounded – losing a leg and much of his pelvis. Doctors saved his life, but he remained in pain and in need of more complicated surgery, beyond what Iraqi hospitals could do at that time of war and occupation by US troops.

Through a non-profit group called “No More Victims,” a group of Oregonians, including several Oregon PSR members, brought Mustafa and his father, Ahmed, to Portland in 2008 for four months so that Mustafa could receive life-saving medical care and a prosthetic leg. Mustafa returned home to Iraq stable, but with some serious chronic renal problems, and within a few years, we lost touch with him. In 2016, through a remarkable series of events, Mustafa was contacted, and now under the auspices of Oregon PSR, we are working to support his medical needs.

Continue reading about Mustafa and our efforts to assist him in obtaining much-needed medical assistance. Read and watch the November 2017 NPR story, watch the 2016 KGW story and read the Oregonian's coverage of Mustafa.

Read more updates about Mustafa's visit to Portland in 2018.

Update (4/7/18): We are thrilled to announce that with help from Senator Wyden’s office, Mustafa and his mother have secured visas to travel to the US and should be arriving in April 2018. We are now partnering with Palestinian Children’s Relief Fund, who is arranging Mustafa’s visit.