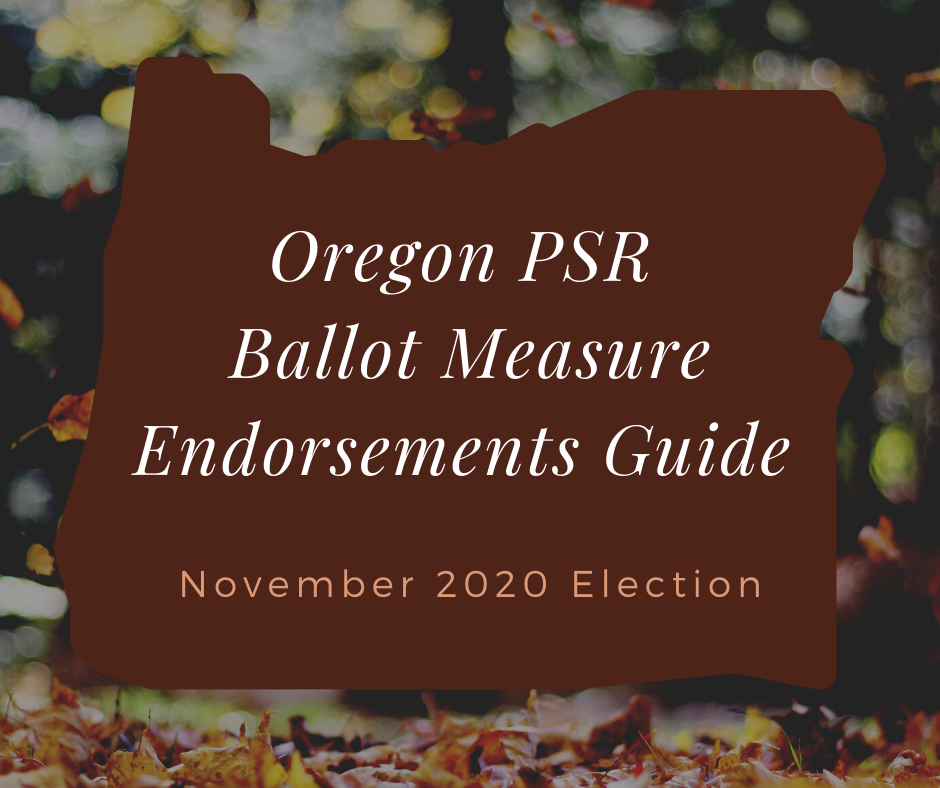 Oregon PSR endorses the following ballot measures in the November 2020 election. Also, please note that our lack of endorsement doesn’t necessarily mean that we oppose a ballot measure, only that our Board of Directors has decided not to make a formal endorsement. 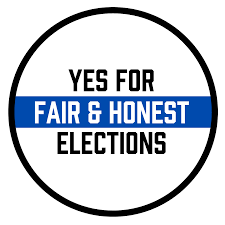 Oregon PSR supports a YES vote on Measure 107 because we know that big money in politics allows corporations, such as those in the fossil fuel, nuclear power, and weapons industries, to spend massive amounts of money in support of candidates who promote policies that cause direct harm to public health. Measure 107 will shift the power from those with the most money to our community’s true leaders, including Black, Indigenous, people of color, and LGBTQ communities, propelling Oregon’s democracy into a more inclusive, honest, and fair system. 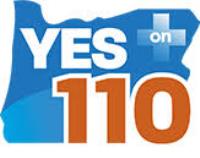 A "yes" vote supports making personal non-commercial possession of a controlled substance no more than a Class E violation (max fine of $100 fine) and establishing a drug addiction treatment and recovery program funded in part by the state's marijuana tax revenue and state prison savings.

The measure would reclassify personal/non-commercial drug possession offenses. Possession of a controlled substance in Schedule I-IV, such as heroin, cocaine, and methamphetamines, would be reclassified from a Class A misdemeanor to a Class E violation resulting in a $100 fine or a completed health assessment. Individuals who manufacture or distribute illegal drugs would still be subject to a criminal penalty. The Oregon Criminal Justice Commission estimated that convictions for possession of a controlled substance would decrease by 3,679 or 90.7%. The health assessments would be conducted through addiction recovery centers and include a substance use disorder screening by a certified alcohol and drug counselor. Health assessments must be completed within 45 days of the violation.

Oregon PSR supports a YES vote on Measure 110 because it treats addiction as a health issue rather than a criminal punishment issue. Black, Indigenous, and people of color are disproportionately represented in drug arrests. Measure 110 would reduce disparities in drug arrests by 95%. Measure 110 is a measure for everyone — a more humane, equitable and effective approach. 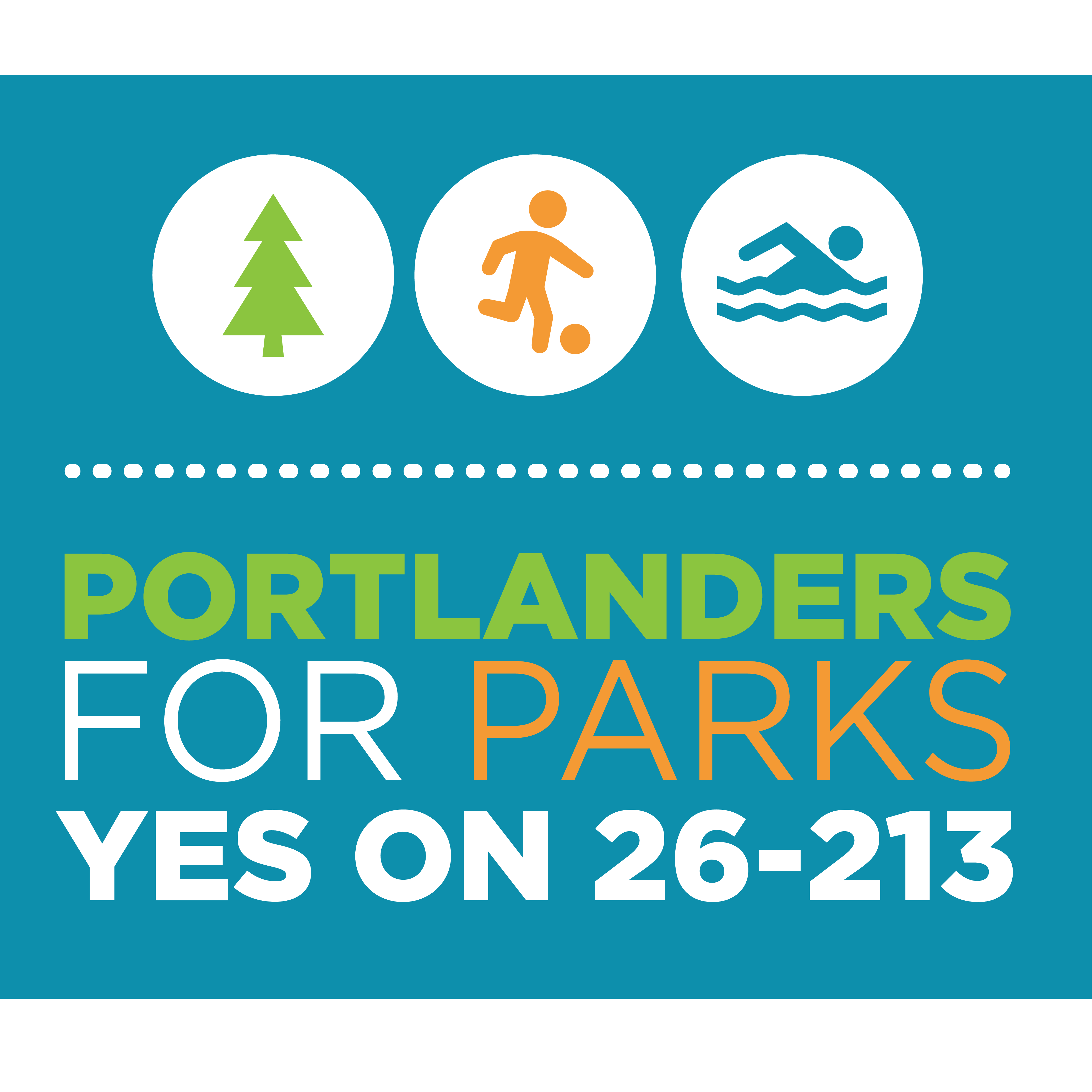 A "yes" vote supports enacting a tax at the rate of $80 per $100,000 of assessed property value for five years beginning in 2021 to fund recreational programs and park services.

The services and programs to be funded by this measure include (but are not limited to) protecting water quality and wildlife habitat, delivering recreational programs and access to nature for youth, cleaning litter and hazardous waste in parks and natural areas, keeping public restrooms open and clean, planting new trees to improve air and water quality and diminish the impacts of climate change, and prioritize services for communities of color and households experiencing poverty.

Oregon PSR supports a YES vote on Measure 26-213 because we understand the importance of protected natural areas, including city parks, to human health. The measure will improve conditions in parks throughout Portland and prevent more job cuts while increasing access for communities of color and households experiencing poverty. The measure will also provide direct benefits to our water and air quality and support a healthier climate. 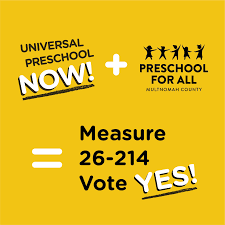 YES on Measure 26-214 (Preschool For All in Multnomah County)

The measure establishes a “'Preschool for All Program” in Multnomah County providing up to six hours per day of tuition-free, developmentally appropriate early learning. It follows a mixed delivery model with half-day, full-day, year-round, and school-year schedule options. All three- and four- year old children with a parent or legal guardian residing in Multnomah County are eligible. Equitable access is provided to people of color and historically marginalized communities, and the measure includes beforecare and aftercare for qualifying incomes.

Oregon PSR supports a YES vote on Measure 26-214 because it will improve access to education and reduce inequality and racial disparities in Multnomah County’s education system, which in turn will promote population health and health equity. Affordable, equitable education for all, regardless of income, is an essential component of healthy, thriving communities. 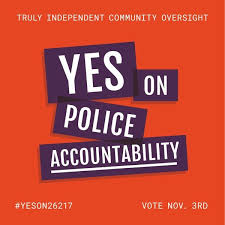 A "yes" vote would add a section to the Portland City Charter that authorizes the creation of a new police oversight board. The proposed measure sets forth the powers of the new board including the authority, to the full extent of the law, to investigate complaints and to issue disciplinary action against sworn police officers and their supervisors, independence from elected offices and city bureaus, and a budget guarantee to assure resources are available to complete the board’s work. The proposed oversight board would also be authorized to directly influence the police bureau’s policies and directives.

Oregon PSR supports a YES vote on Measure 26-217 because it will lead to increased oversight of, and accountability for, the Portland Police Department. Portland is a city with a long history of police violence against Black, Indigenous, and people of color as well as Portlanders experiencing mental illness. This measure is a step in the right direction of reducing the public health crisis of police violence.

A "yes" vote supports authorizing the Metro Council to impose a payroll tax not to exceed 0.75% on employers with 26 or more employees, excluding local governments, beginning in 2022 to fund infrastructure improvements and transportation programs.

Oregon PSR supports a YES vote on Measure 26-218 because it will improve transportation safety and increase transit options throughout the Portland metro area, providing direct improvements to public health. It will also address systemic inequities in transportation, improving access to safe, reliable transportation for all Portlanders. Because it improves transit efficiency and prioritizes walking, biking, and mass transit, it will also improve local air quality and lessen the impacts of climate chaos.