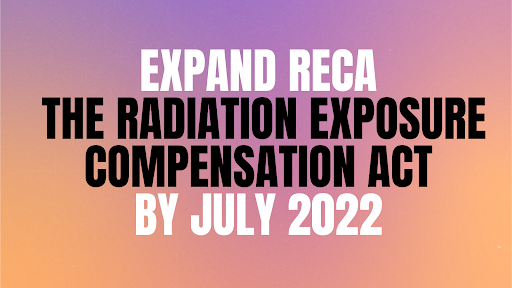 Since the earliest days of the nuclear age, US nuclear weapons testing and uranium mining have sickened and killed untold numbers of people in the US. There is a program to provide restitution to these individuals — the Radiation Exposure Compensation Act (RECA) — but it is severely flawed and will expire in less than a year unless Congress takes action. Learn more about RECA and the need to extend and expand it.

Please take a moment to call Oregon Senators and your Representative on this important issue right now:

Not in Oregon or don’t know who represents you? Look it up here.

Estimates of the number of cancer cases linked to US nuclear testing range from tens to hundreds of thousands. And, since the 1930s, we have known that there is a clear link between cancers and radiation exposure in uranium mines and mills. This is also an issue of environmental and racial justice: nuclear weapons activities have disproportionately contaminated the environment and threatened the health of Indigenous communities, communities of color, and poor, rural communities.

RECA is a valuable program, and its enactment was a huge step towards justice for those harmed, but it still has major flaws. Many highly exposed communities are still excluded from RECA. In Oregon, we have both uranium miners and Atomic Veterans who will be harmed if RECA is allowed to expire. Problematically, a few key groups are not included in the legislation due to an error and this is especially harming the second-generation clean-up veterans. The amount of compensation victims receive barely covers the cost of cancer treatment, and more often than not it comes far short of reaching that low bar. And, perhaps most significantly, RECA is set to expire in July 2022.

We need to also make sure that ALL atomic and cleanup veterans are included.

“My uncle was an Atomic Veteran who died a miserable death due to the strange cancers doctors had never seen before. His family never received any RECA compensation. We cannot repair the betrayal nor the physical harms, like cancer, disease, sterility, spontaneous abortions, birth defects and early death caused by negligent exposure to radiation.” — Dr. Linda Richards, historian of radiation science and harm at Oregon State University

Many individuals across the country continue to suffer from past US nuclear weapons development and testing. Thank you for standing with them to help achieve justice.