Thanks for Attending The Unequal Impacts of Nuclear Weapons: Hiroshima & Nagasaki Memorial 2019! 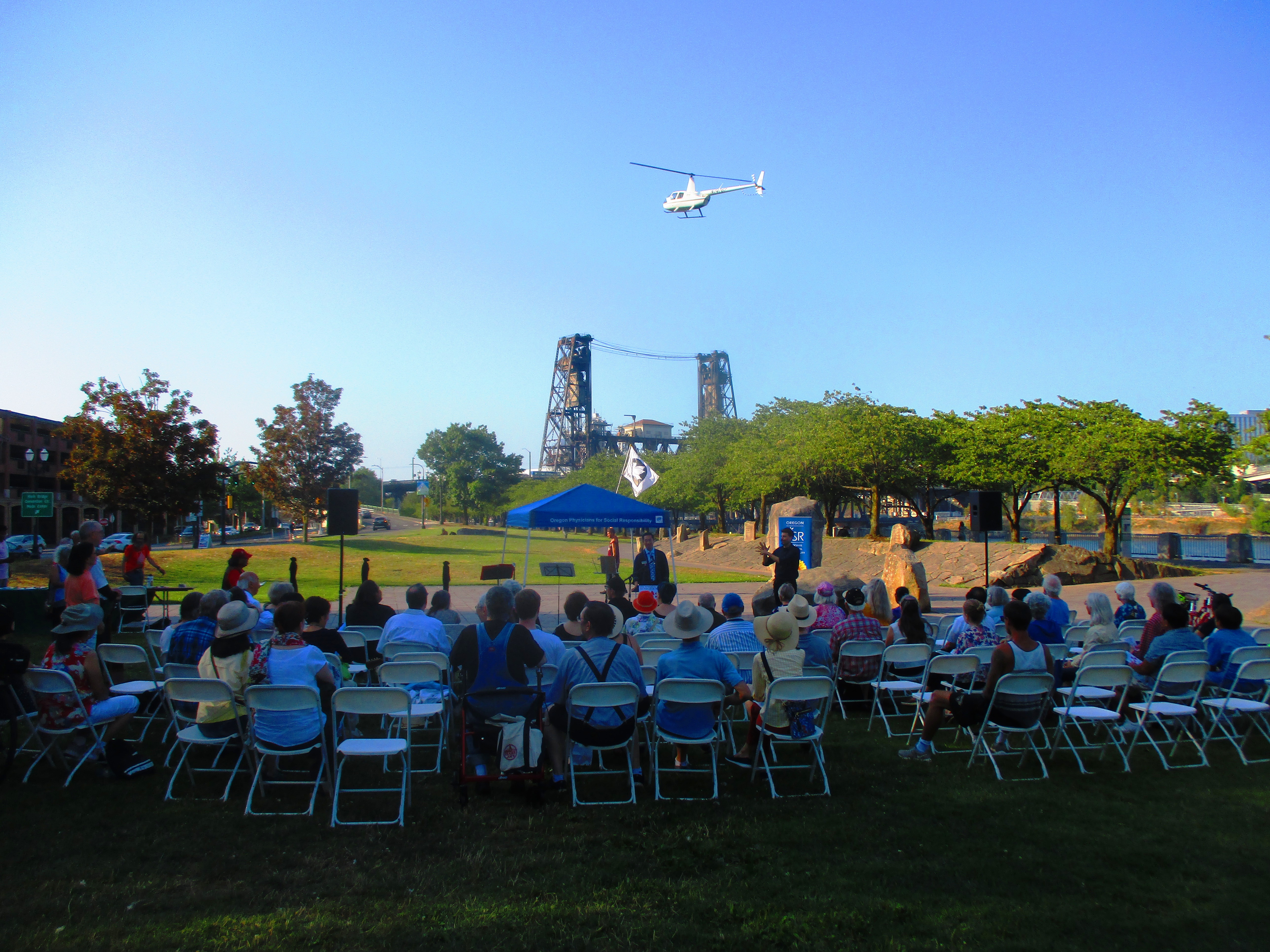 Oregon PSR expresses our sincere appreciation to everyone who joined us on the evening of Tuesday, August 6th at the Japanese American Historical Plaza for the annual Portland-area Hiroshima and Nagasaki memorial event. This year's event, The Unequal Impacts of Nuclear Weapons: Hiroshima & Nagasaki Memorial 2019, explored the disproportionate impacts that nuclear weapons have had, and continue to have, on women, children, indigenous communities, and communities of color around the world. 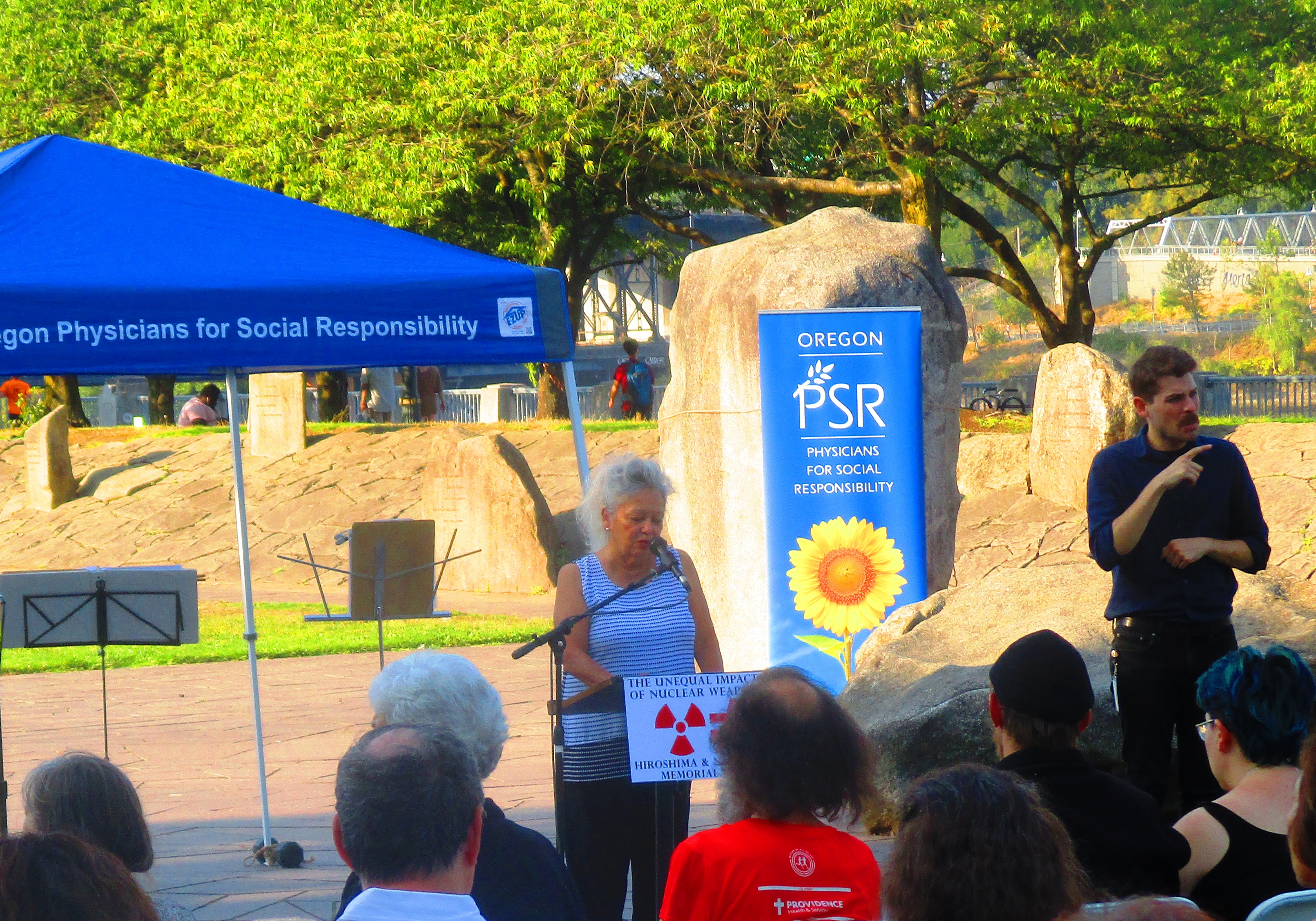 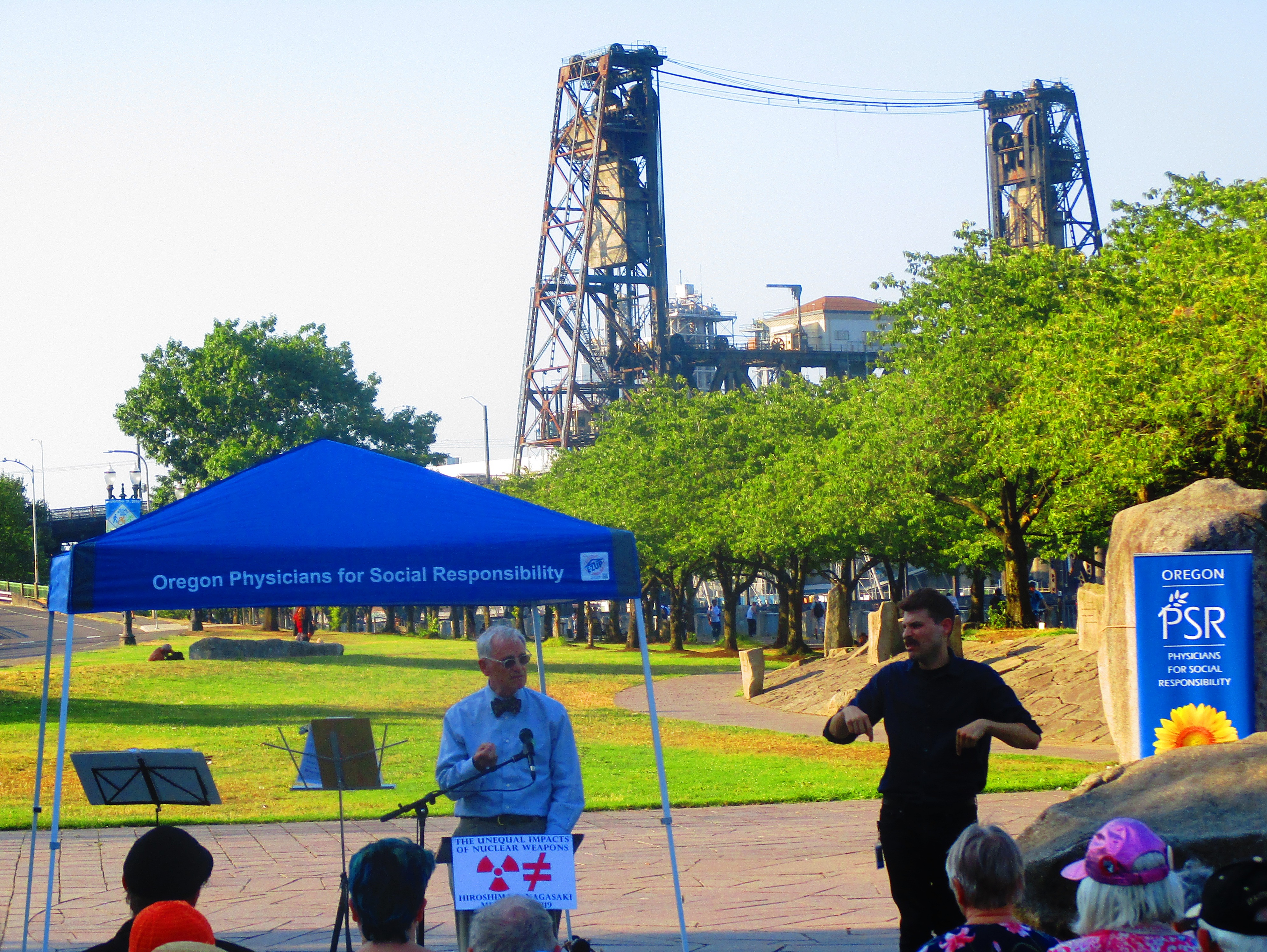 As the sun began to sink low over the downtown Portland skyline on a warm August evening, our first guest speaker took the stage. Congressman Earl Blumenauer, who represents most of Portland east of the Willamette River and is one of the most effective and dedicated voices for nuclear disarmament in the US government, reminded our audience of the critical need to stay informed and stay involved in the struggle against these morally unacceptable weapons of indiscriminate mass murder. Our thanks go to Congressman Blumenauer for joining us, and for all of his tremendous work to limit US taxpayer funding of nuclear weapons and advance common-sense nuclear disarmament legislation in Congress.

Our next speaker, Michiko Kornhauser, a hibakusha (atomic bomb survivor), then discussed her first-hand experiences as a young girl living near Hiroshima during and subsequent to the August 6th, 1945 bombing. Michiko spoke movingly about the stark and gruesome realities of nuclear weapons use, of the impacts on her and her young classmates of seeing the city of Hiroshima, largely reduced to cinder and smoke by a US nuclear weapon, floating down in a thickening fall of radioactive ash. Radiation is particularly harmful to children, and especially to young girls, who are more than twice as likely as boys to develop cancer based on the same level of exposure to ionizing radiation. We extend our deepest thanks to Michiko for sharing her powerful stories and memories with us. 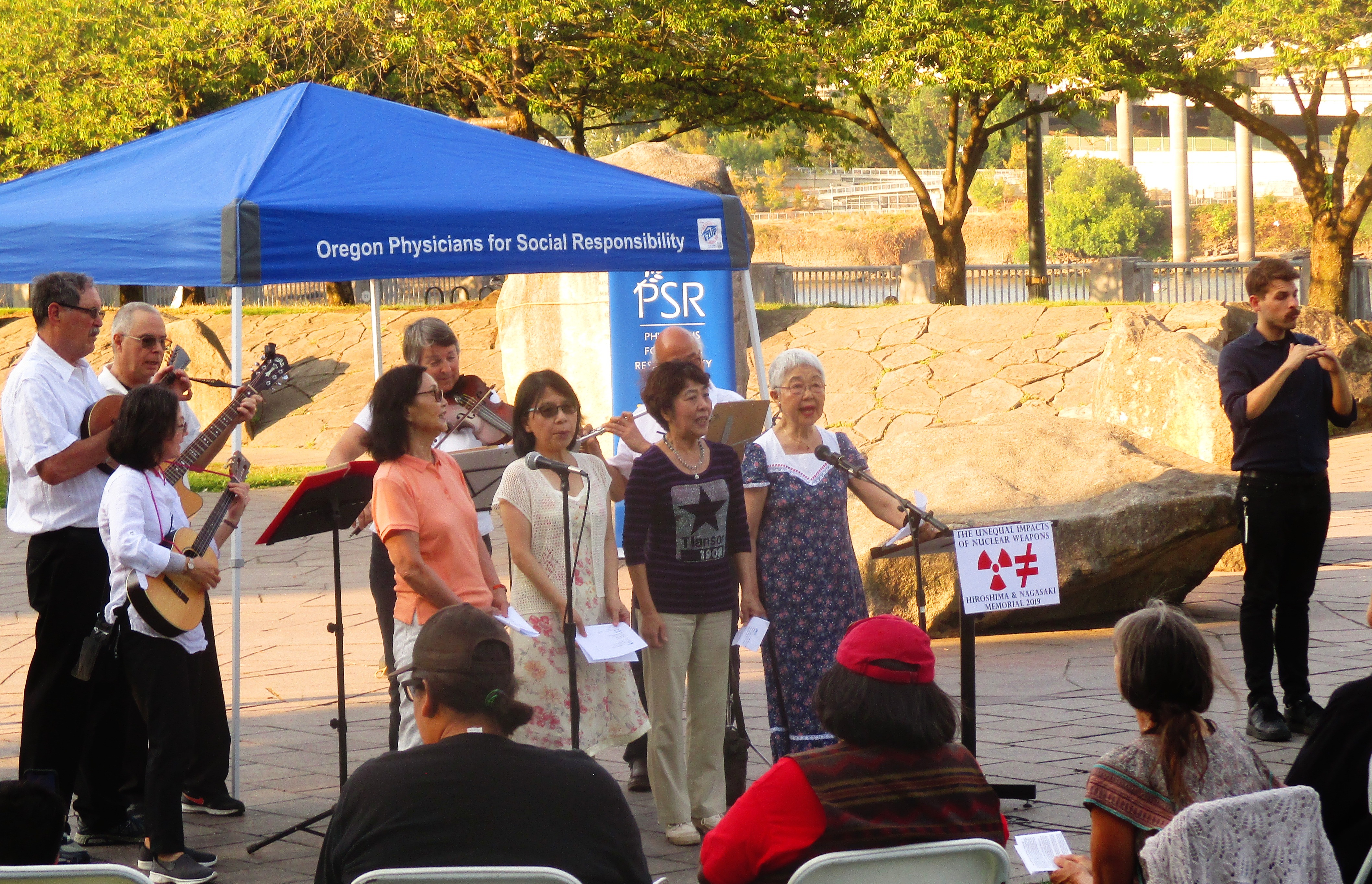 The Ikoi-no-kai House Band performs songs of peace and remembrance.

Following Michiko's speech, we were treated to a performance by the Ikoi-no-kai House Band. Members John Crull, Mary Crull, Mardi Fulop, Ellen Hansen, Hiroshi Iwaya, Sonoko Kakizaki, Michiko Kornhauser, Ching Ling, and Kuniko Lynn performed five short songs, and we express our thanks to the band members for joining us. 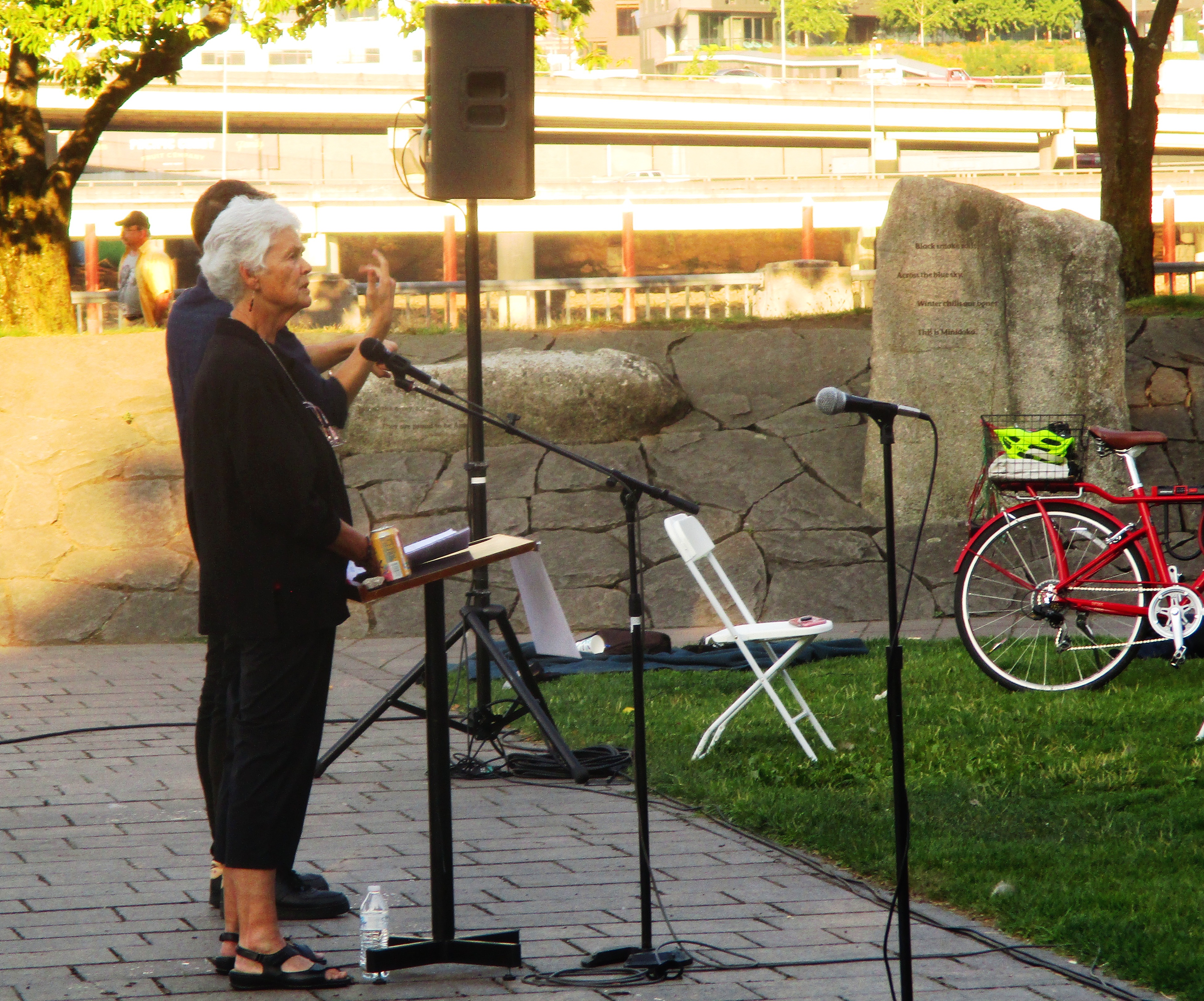 Our final speaker for the evening, Patricia Hoover, has been an anti-nuclear and environmental activist for over 30 years. Growing up in The Dalles and Hermiston, Oregon, Patricia was exposed to emissions from the 1940’s to the 1960’s from the production of plutonium for the US nuclear weapons program at the Hanford Nuclear Reservation. As a Hanford Downwinder, Patricia spoke on the lasting health impacts that radioactive contamination from Hanford has had on her and her family. Women are unequally impacted by exposure to radiation, with at least three women getting cancer for every two men with the same levels of radiation exposure. Pat told us of seeing the numerous gravestones of infants in the local cemetery, many of whom lived only a few days or less before succumbing to the effects of radiation-related genetic damage, which disproportionately impacts developing infants and children far more so than adults.

Patricia also spoke about Senate Joint Memorial 5,  introduced at the request of Oregon PSR in Oregon's most recent legislative session, which calls out the injustice and harm that nuclear weapons have caused through the bombings of Hiroshima and Nagasaki, uranium mining on indigenous lands, weapons testing in the Pacific Islands, and contamination of our own region from the Hanford Nuclear Reservation. SJM 5 explicitly calls out the unequal impacts that nuclear weapons material mining and nuclear weapons production, testing, storage, and use has had, and continues to have, on indigenous communities and communities of color. The passage of this historic legislation, which was supported by 31 organizations around the state, makes Oregon the second state in the nation to join this growing movement of local governments to support the United Nations' Treaty on the Prohibition of Nuclear Weapons. 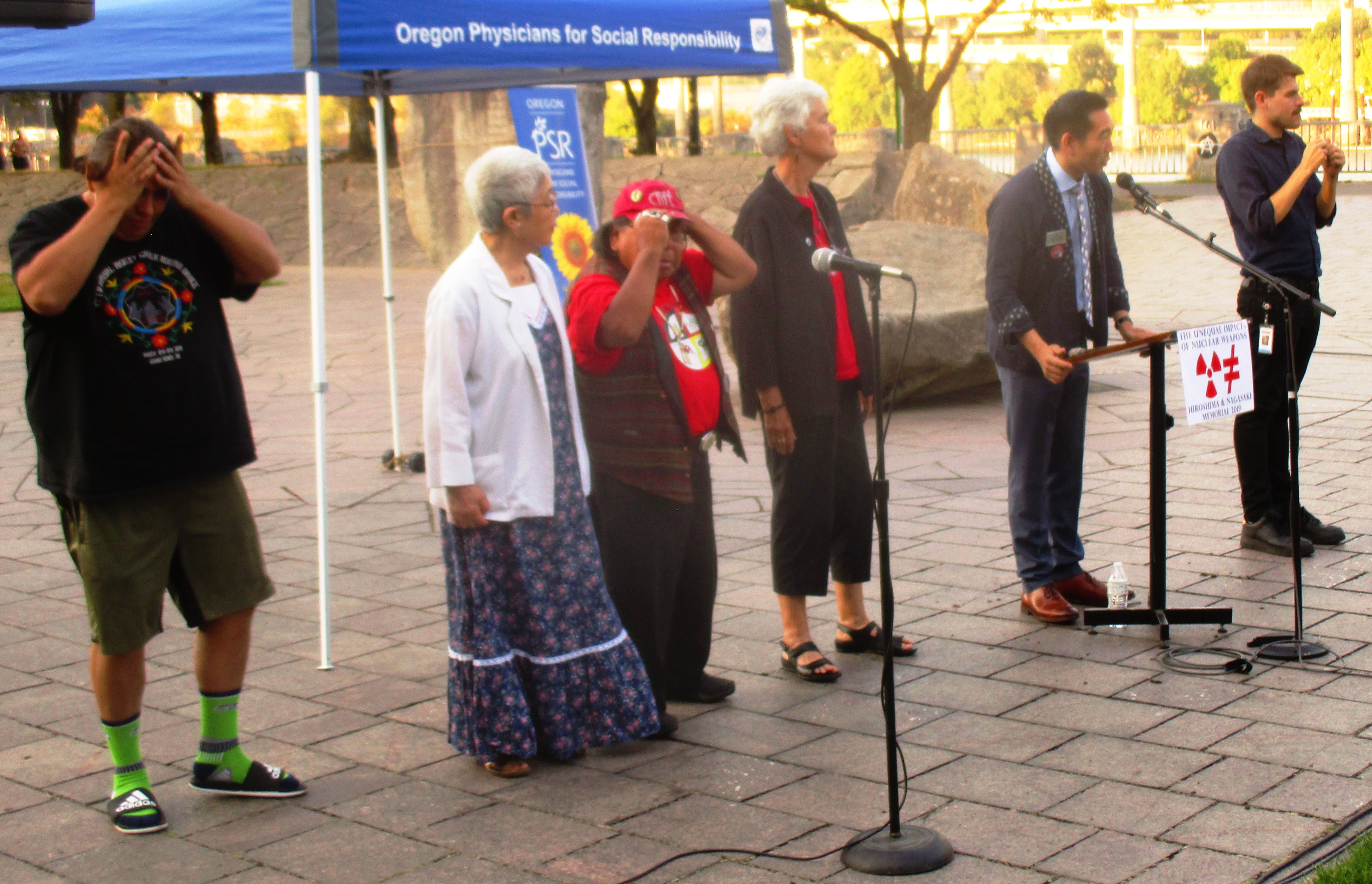 Event emcee Kurt Ikeda, joined on stage by our event speakers, then lead our audience members in a ceremonial moment of reflection developed by artist, educator, and Oregon PSR Advisory Board member Chisao Hata. Kurt reflected on our speakers' words, drawing a connection between Michiko's story of the use of nuclear weapons in Japan and Patricia's story of the production of those same weapons in our own region of the world. John Edmo then took the stage to close our event with another drum and song performance.

Our thanks again to everyone who attended, to the event speakers and performers, and a special THANK YOU to the event planning committee, without whom this event would not have been possible.

Thanks, also, to the many Oregon PSR members whose financial support allows us to organize this annual memorial event and engage members of our community in the growing movement for nuclear weapons abolition. Thank you!

Watch more footage of the event (Part 1, Part 2, and Part 3), courtesy of Dan Shea at Veterans for Peace Chapter 72.