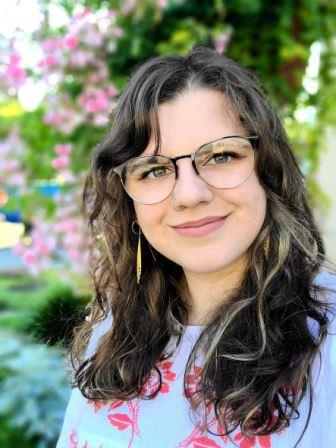 Georgia Davis (she/her) is a new member of Oregon PSR’s Peace Work Group, but has been involved with a wide range of denuclearization and healthy climate initiatives in recent years. Before graduating in 2021 with a Master’s Degree in Environmental Natural Resources and Energy Law, she was a participant in the 2020 International Campaign to Abolish Nuclear Weapons (ICAN) Hiroshima Academy. While the cohort’s excursion to Hiroshima was canceled due to the pandemic, this experience led her to join Oregon PSR to continue the fight to abolish nuclear weapons. Currently, she is meeting with local representatives and working to garner support for the Treaty on the Prohibition of Nuclear Weapons (TPNW) in her hometown of Hillsboro, Oregon.

Georgia’s concern for nuclear issues is one that hits close to home. As a native of North Dakota, Georgia grew up in a state that houses numerous nuclear silos. This knowledge became a point of anxiety after 2016, when tensions between the US and North Korea continued to rise until national leaders began threatening nuclear war. She realized that living near nuclear silos made her family vulnerable to targeted attacks, but ultimately, she highlights that the threat of war is “a threat to every ecosystem on the planet.” Today, Georgia’s concerns surrounding nuclear weaponry and energy are closely linked to her environmentalist collegiate studies: “I’m interested in looking at these issues from a justice perspective. Where are we putting nuclear waste? From whom are we extracting the resources for these nuclear projects? Usually, we are extracting resources from Indigenous groups.” Looking forward, Georgia plans to continue merging her concerns for climate and community through the Hanford Nuclear Reservation cleanup project and advocacy campaigns for Hanford downwinders with Oregon PSR.

By day, Georgia is employed as an Operations Specialist for the Oregon Employment Department; by night, she continues her work towards a paralegal certification at Portland Community College. In addition, she volunteers with the Citizens Climate Lobby, where she focuses on recruiting young members to the organization. In the future, Georgia hopes to transfer these skills to her work with Oregon PSR by helping to recruit the next generation of young people who will continue to pursue a healthy climate and nuclear-free world.