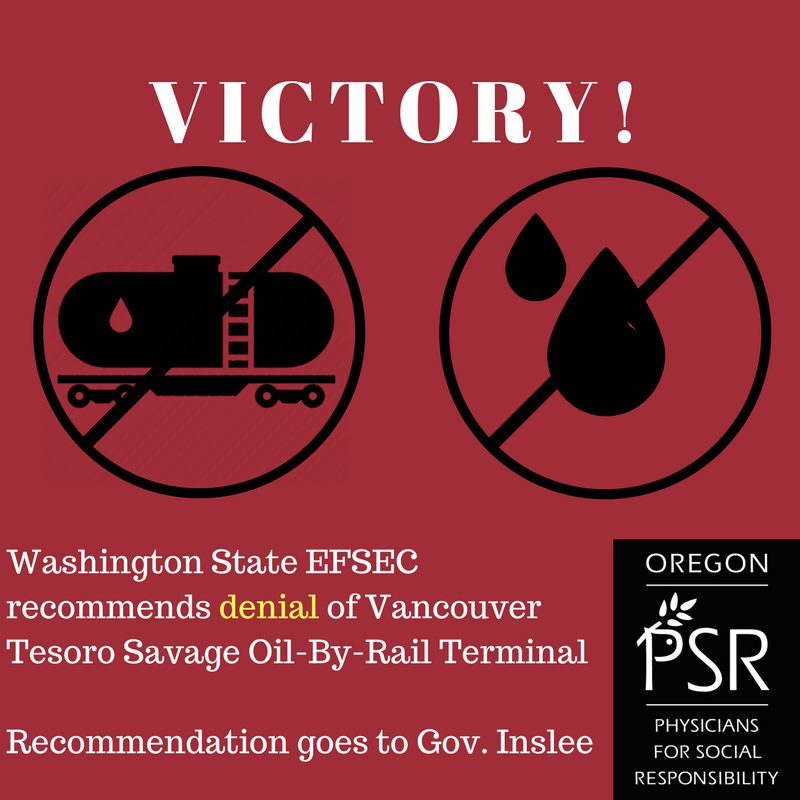 Today the Washington State Energy Facility Site Evaluation Council (EFSEC) unanimously recommended denial of the Tesoro Savage oil terminal in Vancouver, Washington. The final decision now falls to Governor Jay Inslee, and community leaders from around the region are calling on Gov. Inslee to deny the proposal swiftly, ending a four-year saga over the massive, 360,000-barrel-per day oil train terminal. A final written recommendation will be issued on December 19th.

“The future safety, well-being, and public health of our community depends on the choices we make today. Rejecting the proposed Tesoro-Savage oil terminal should be first on the list, “ stated Dr. Stan Freidberg, who has spent 37 years practicing cardiology and internal medicine at The Vancouver Clinic.

"The Tesoro Savage Vancouver Energy Project is a direct threat to our treaty-reserved rights, which is why the Yakama Nation has always opposed the project," said JoDe Goudy, Chairman of the Yakama Nation. "The people of the Yakama Nation have lived, fished, and practiced their cultural and religious traditions since time immemorial along the Columbia River, including the area threatened by the proposed Tesoro-Savage project site. Between the recent sewage spills in Vancouver last month and the oil train derailment in Mosier, Ore. last year, we cannot allow any further pollution to our river."

“EFSEC followed the law that requires it to balance the need for this project against protection of human health and the environment,” said Kristen Boyles, the Earthjustice attorney representing community and environmental groups before the agency. “Tesoro Savage failed this standard, and we trust Governor Inslee will agree.”

“The 2016 Mosier oil train derailment and fire, an incident that came within a few hundred feet of harming hundreds of children at at the Mosier Community School, should be a wake-up call for the region," said Laurent Picard, a 21 year veteran professional firefighter and former Hood River City Council member. "It’s plainly obvious that oil trains pose an unacceptable risk. We can't expect to introduce five loaded oil trains a day in unsafe railcars and expect our first responders to handle the enormous risks involved. That's why we hear from firefighters and city councilors in Spokane, Vancouver, and throughout the Columbia River Gorge that this oil terminal is a bad idea. Governor Inslee should deny this project."

“We indigenous people of the Columbia carry a sacred duty to protect the health of the Columbia River from dangers like the Tesoro-Savage oil terminal,” said Elke & Alysia Littleleaf, professional fly fishing guides and members of the Confederated Tribes of Warm Springs. “Our lives are connected to the river. The salmon, the steelhead, and the sturgeon are the lifeblood of our communities. Everything that flows with this river is interconnected to our culture, our spirituality, our economic independence, and our very sustenance. We appreciate the consideration that the Council undertook to review these risks, to honor our elders, to honor our future generations, and to honor the treaty rights of indigenous people to fish the Columbia as we have since time immemorial, and we look forward to Governor Inslee doing just the same and saying no to oil, and saying yes to Columbia River salmon.”

For more on the history of the movement to protect Oregon and Washington communities from the public health risk of oil trains, CLICK HERE.