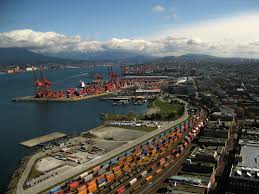 The Port of Vancouver (British Columbia) has pulled the plug on the Fraser Surrey Docks proposal, not far from the U.S.-Canadian border, which would have brought open coal trains through greater Vancouver and ocean-going ships into the Fraser River.

The coal port would have received 4 million metric tons of coal a year from the Powder River Basin in Wyoming and Montana, for shipment to Asian markets.

"The decision to cancel permits for this coal port shows that the world is turning away from this dirty energy of the past and towards a clean energy future," said Regna Merritt of the Washington-based Power Past Coal environmental coalition.

BC Premier requests end to US coal exports through Canada (press release, 4/27/1)