What Does Peace Really Mean? Reflections on a Visit to Hanford's B Reactor 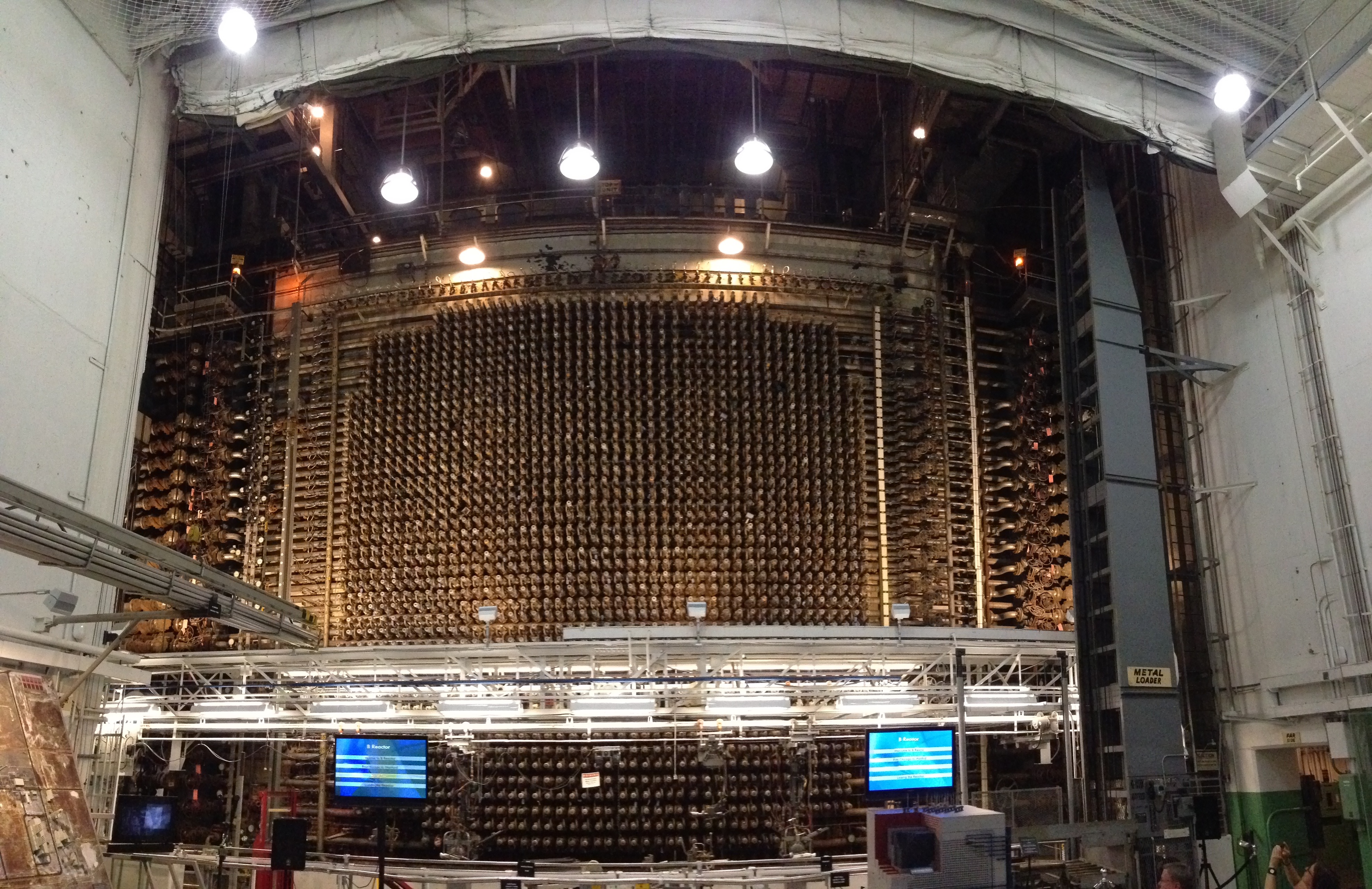 The face of the Hanford B Reactor, 36 feet tall with over 2,000 horizontal aluminum loading tubes.

On July 7th, 2017, one hundred and twenty-two countries in the United Nations voted to enact a treaty ban on nuclear weapons. Not a single one of those 122 countries was a nuclear-armed nation. On July 11th, 2017, I traveled with seven others from Oregon PSR to visit the first fully functional nuclear reactor at the Hanford Nuclear Reserve near Richland, Washington. It took us many hours of driving along the Columbia River and watching the landscape around us change dramatically from verdant, rain-soaked Portland to the yellow, arid plains of eastern Washington. In one way, it felt like a return to familiar lands, since I grew up driving from dry Colorado across the Midwestern plains to see my family in Southern Illinois. 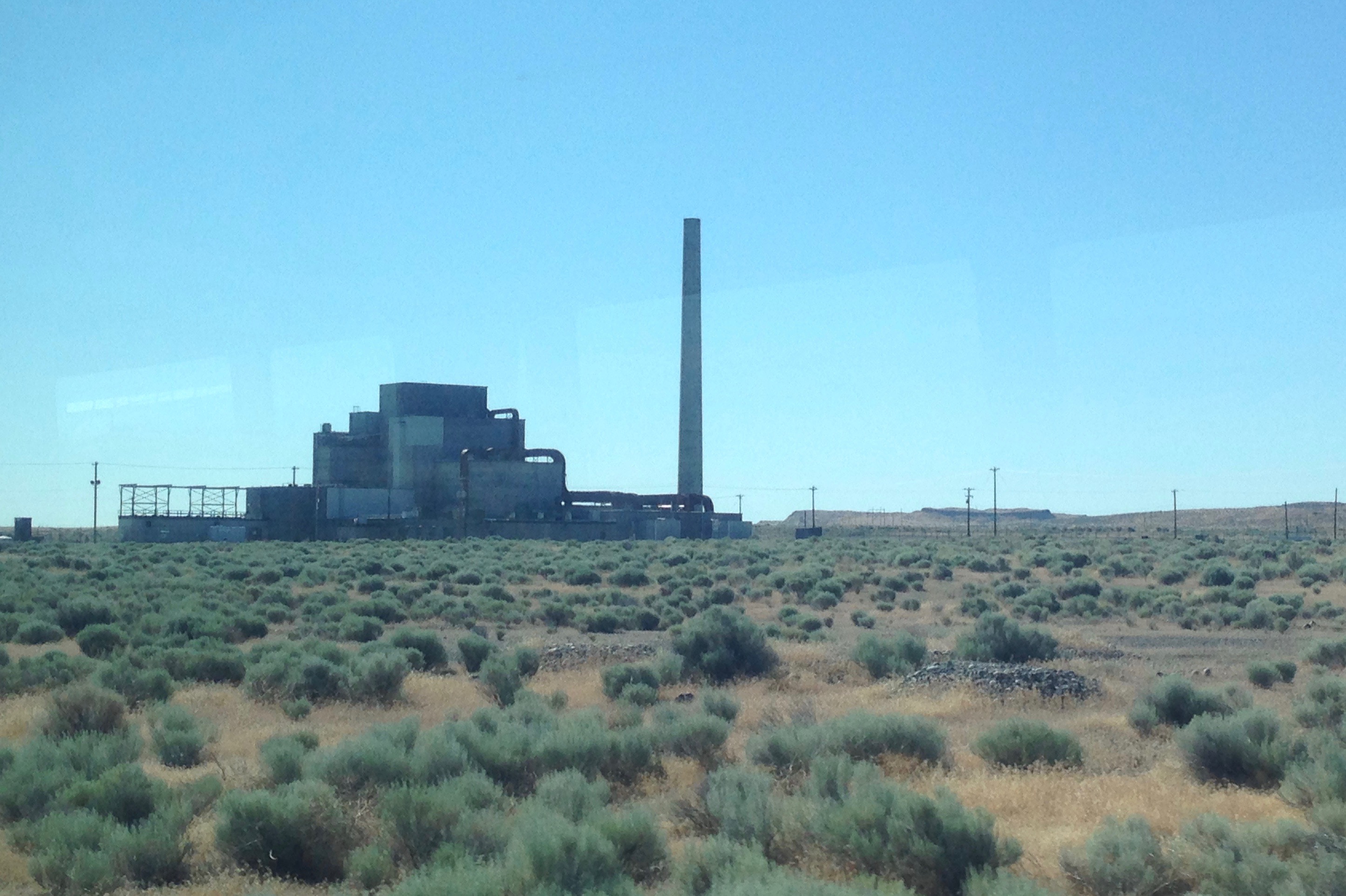 Hanford B Reactor near Richland, WA. This was the site of plutonium manufacturing for the bomb that was dropped on Nagasaki, Japan on August 9th, 1945.

But in almost every other conceivable way, Hanford felt unfamiliar and disorienting. I'll admit I enjoyed my "Oppenheimer Oatmeal Stout" at the "Atomic Ale" brewpub, and the tour guides and docents for our visit to the Hanford B Reactor were kind and welcoming. But as we drove out across the hot, spacious landscape away from the city, I felt a sense of foreboding. The feeling magnified as I wandered the industrial hallways of the historically-preserved reactor, hearing about how workers at the project had no idea what they were working to develop and that 1,500 people (including Native Americans) were given less than 30 days to leave their land for these reactors to be built by the U.S. government. 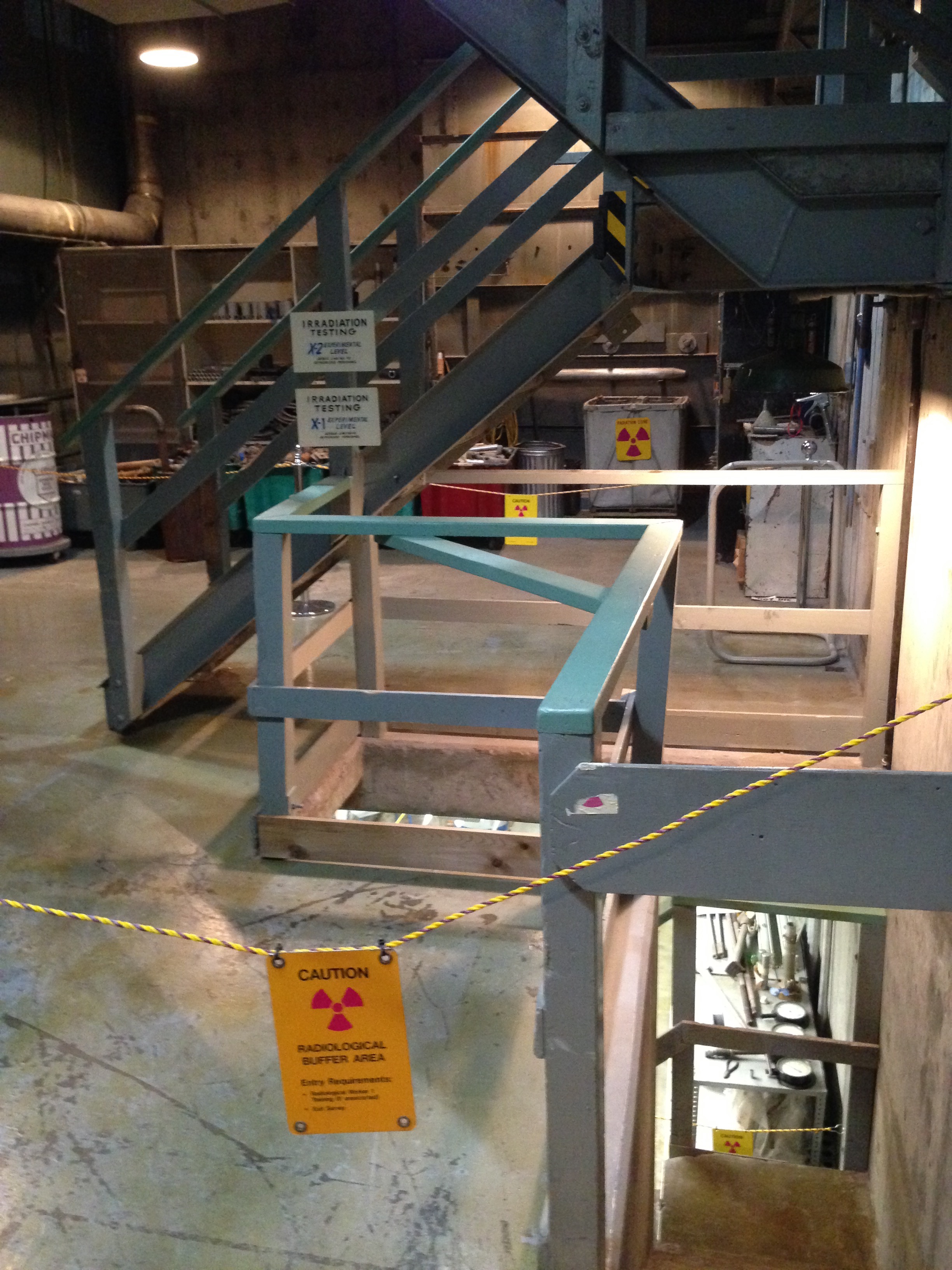 Many parts of the B Reactor are still too radioactively contaminated for safe visitation.

My mind wandered to factory workers painting glow-in-the-dark-watches who used to lick radium-soaked paintbrushes without knowing what damage that would do. I thought about our country's consistent and ongoing legacy of western imperialism displacing indigenous communities from their land and water. Should I really be surprised that Hanford carried similar stories? 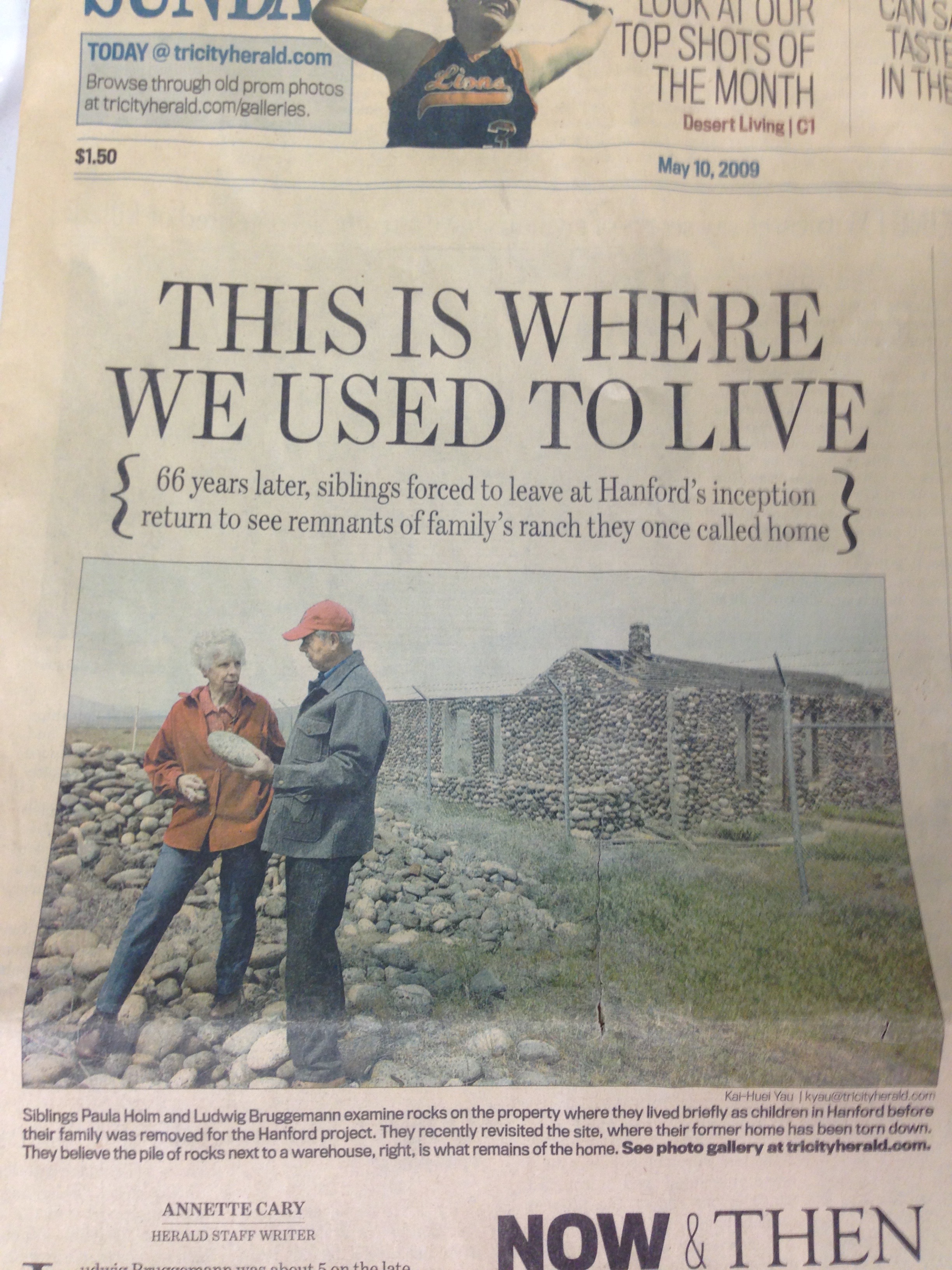 About 1,500 people including Native Americans were given less than 30 days to leave their homes for the Manhattan Project's Hanford nuclear site.

I imagined myself as a factory employee discovering that my work was contributing to the biggest weapon of mass destruction that humanity has ever known. I imagined myself being told that weapon was an instrument of peace. If peace is a bomb that can annihilate 100,000 people in one fell swoop, leaving behind a lost generation and vastly multiplied cancer rates, then what does peace really mean? 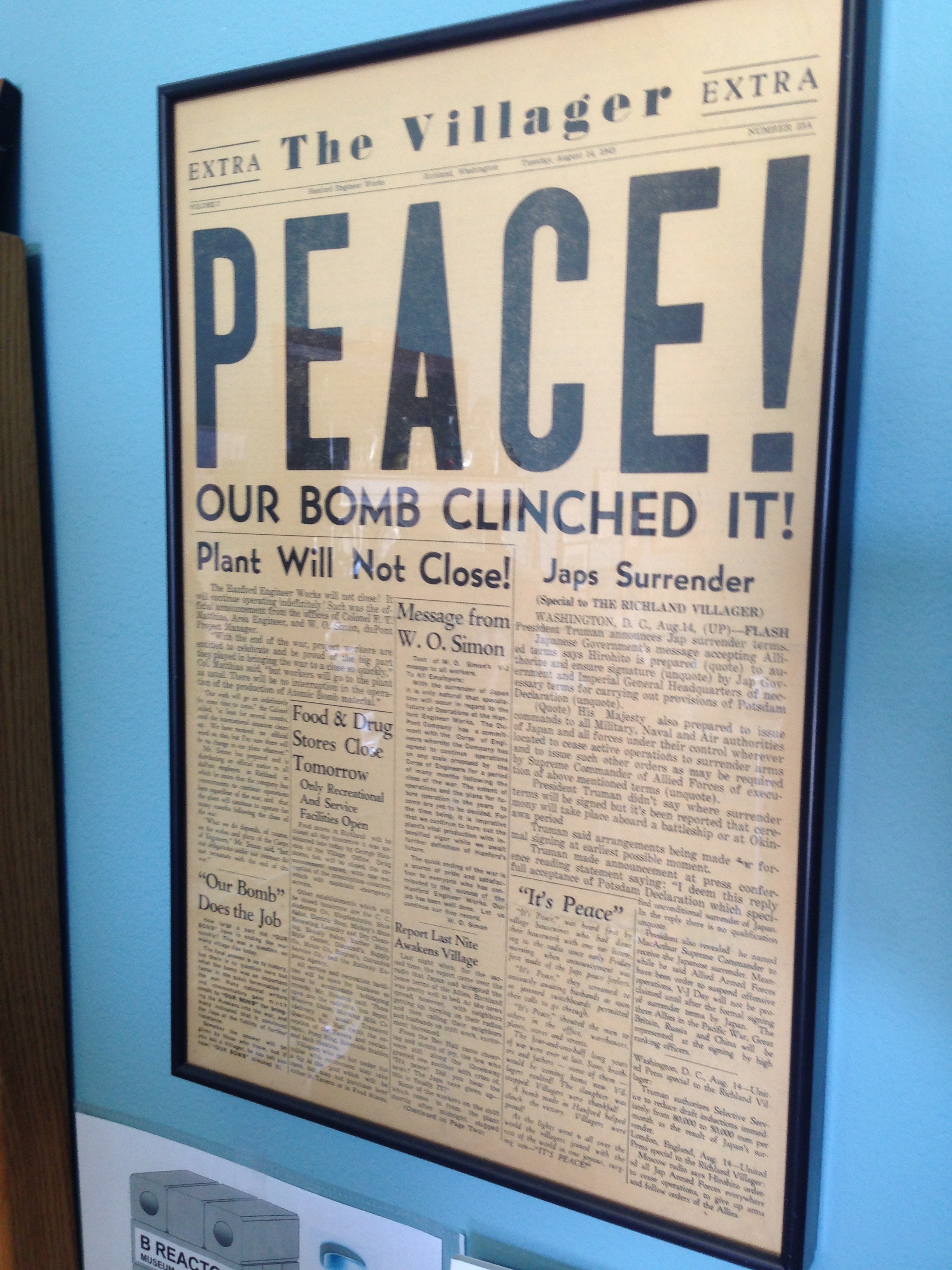 The local paper after Japan surrendered. It is estimated that between 129,000–226,000 or more people were killed in the bombings of Hiroshima and Nagasaki.

The terms "violence" and "peaceful protestors" popped into my head, which is normal for someone who has lived in Portland through the inauguration of our 45th president and a white supremacist murdering people on a train I use to commute. It strikes me as vitally important to be very clear about what we mean when we set up the dichotomy of "peaceful" and "violent." For me, it is violent to build an oil pipeline that will corrupt clean water. For me, it is peaceful to rally in the streets in support of nuclear disarmament, fair policing, and migrant justice. For me, it is violent to remain neutral and passive while holding on to privilege and comfort that could be shared with those who are struggling to survive and thrive. For me, it is peaceful to be kind and forgiving to yourself and others, acknowledging that "nothing short of everything will do" as Aldous Huxley wrote, but also that it is OK to make mistakes and take breaks. 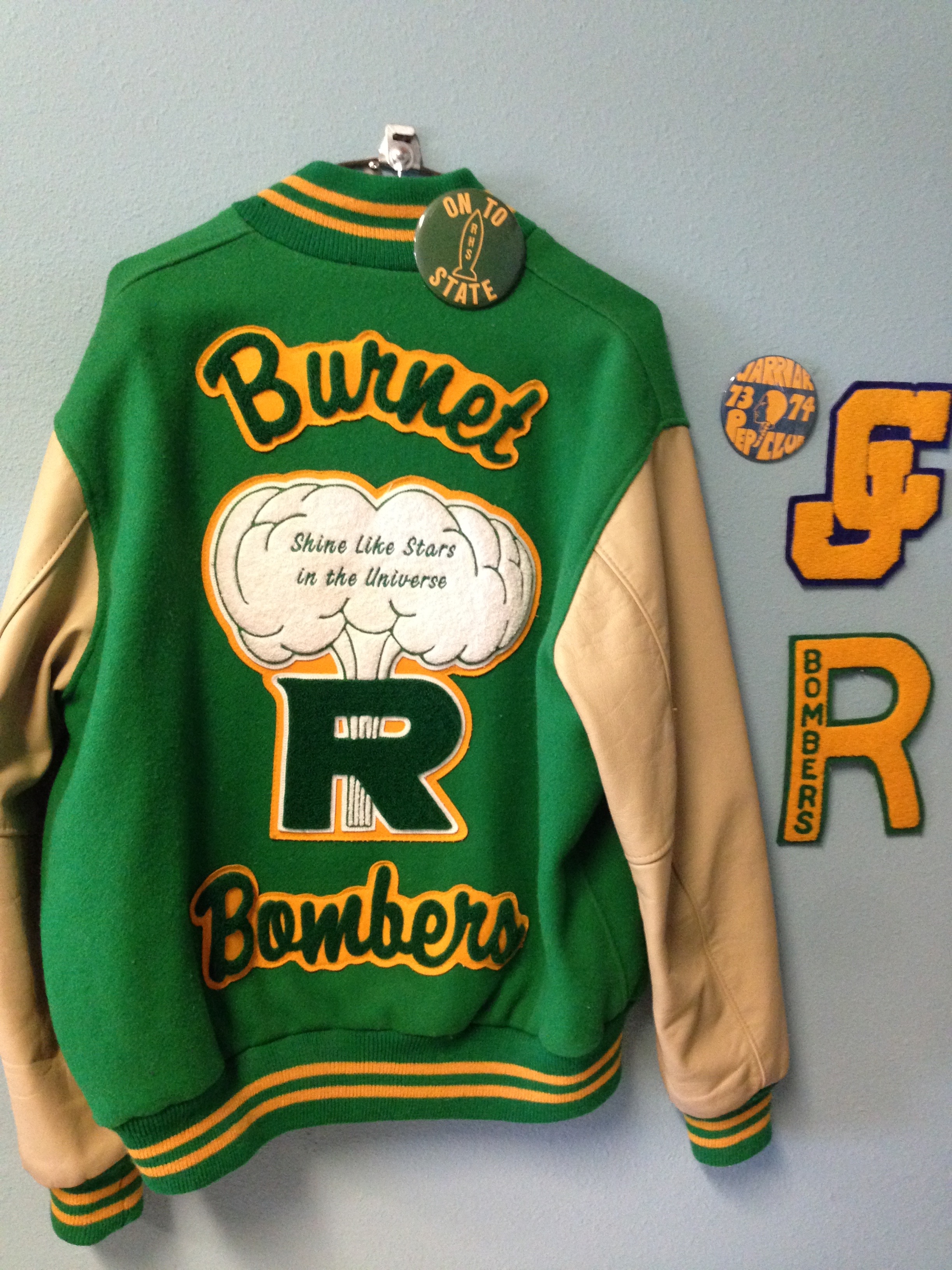 Today, the Richland High School mascot is still "The Bombers," and a mushroom cloud is their logo.

What are your definitions of peace? What does a more peaceful, just, and healthy world look like to you? Know that you are not alone in striving for a true, just peace, and that the best change takes place in groups of community and mutual support.

You can be a part of such a community on Wednesday, August 9th, 2017 as we commemorate the anniversary of the horrible bombings of Hiroshima and Nagasaki (the plutonium for which was made at the Hanford B Reactor). Click here for more details. Join us to lift up the truth that peace is not obtained via mass murder, and that humanity should never use these apocalyptic bombs again.

Panorama of the B Reactor at Hanford and a train that was used to transport plutonium to other processing sites.