Nuclear weapons are in the news and on people’s minds lately in a way that we haven’t seen in decades. Taking advantage of this heightened awareness, Oregon PSR has been proactive this year in raising the topic of nuclear disarmament in innovative ways and with new audiences, building the case for nuclear abolition as a social justice concern that is deeply connected to the economic, racial, and environmental justice issues being addressed by growing and increasingly interconnected progressive movements. While recent news such as Trump pulling out of the Intermediate-Range Nuclear Forces (INF) Treaty and increased conflict between nuclear-armed India and Pakistan are worrisome, the success of the UN Treaty on the Prohibition of Nuclear Weapons (commonly called the Nuclear Ban Treaty) gives us a legal framework for a path to make the possibility a nuclear weapons-free world a reality.

One new venue where we’re raising the discussion of nuclear disarmament is with the Oregon State Legislature. At our request, Chief Sponsors Senator Michael Dembrow and Representatives Tawna Sanchez and Alissa Keny-Guyer introduced Senate Joint Memorial 5 (SJM 5), which resolves that Oregon’s legislature urges the federal government to sign the UN Treaty on the Prohibition of Nuclear Weapons and supports a host of federal legislative efforts to prevent nuclear war. The memorial garnered 16 additional sponsors and is providing an opening to discuss how nuclear weapons impact Oregonians, such as the cost trade-offs of wasting our tax dollars on these unnecessary weapons rather than funding human needs. We’re working with a broad spectrum of organizations around the state that support the memorial, including such diverse groups as the Oregon Just Transition Alliance, Church Women of Lane County, the Oregon Marshallese Community, and the Sierra Club, among many others, and we are finding widespread enthusiasm for making a profound and unequivocal statement that Oregonians support nuclear disarmament.

Take Action: Please contact your Oregon state senator and representative and ask them to support SJM 5. 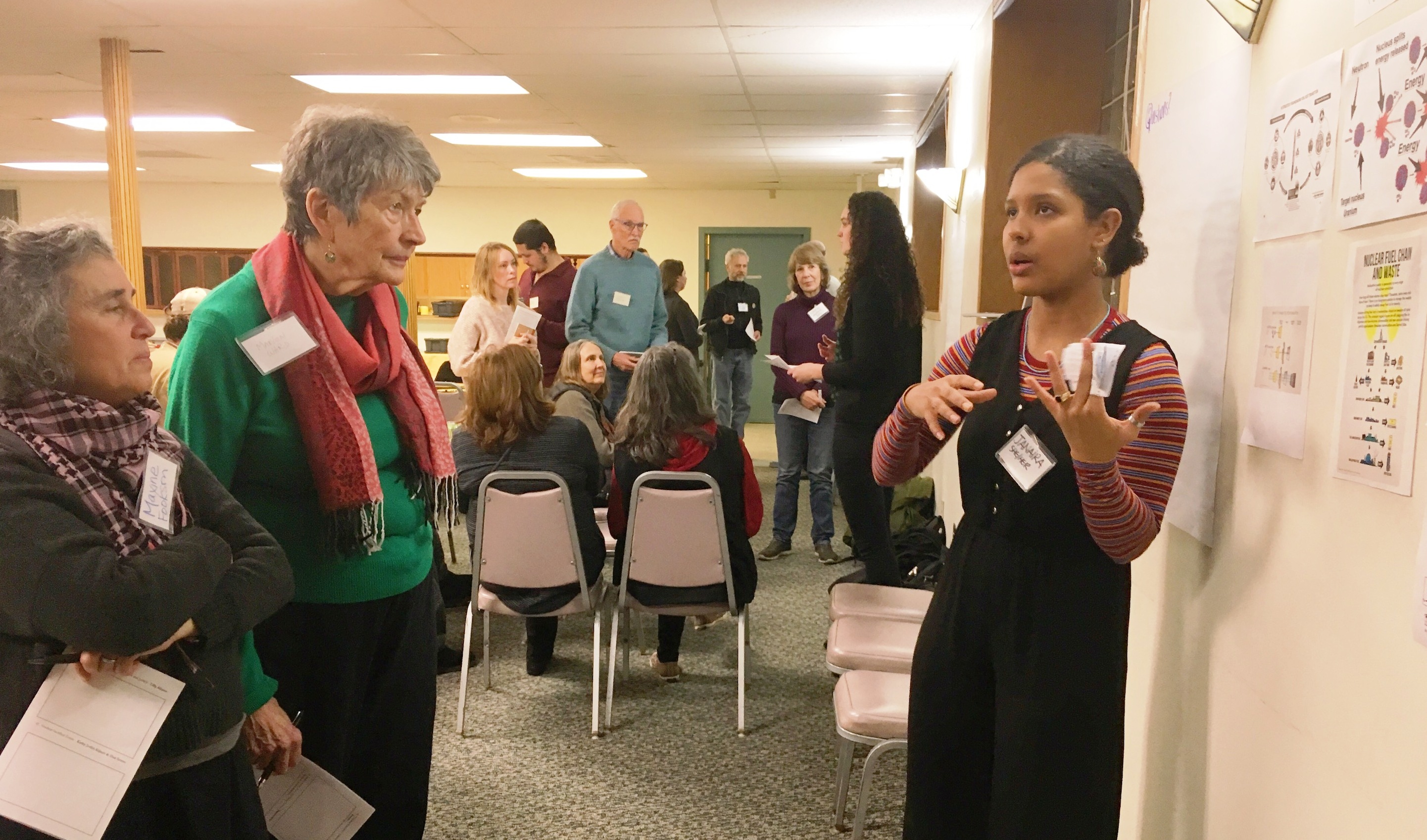 No Nukes Forum Makes the Connections to Social Justice

On January 10th of this year, around 45 people gathered at the No Nukes Forum in Portland to learn about how nuclear weapons and nuclear power intersect with social justice issues. Using an innovative ‘learning stations’ format, participants had the opportunity to partake in activities such as learning about nuclear sacrifice zones in the Marshall Islands and Hanford Nuclear Reservation with Marshallese poet and activist Kathy Jetñil-Kijiner and Columbia Riverkeeper’s Dan Serres; viewing the devastation of the Hiroshima bombing through the eyes of young artists with Chisao Hata and Yukiyo Kawano; exploring the intersection of gender and nuclear weapons with Lilly Adams of Washington PSR; understanding why nuclear power is not part of a just energy transition with Janaira Ramirez of the Oregon Just Transition Alliance and our own Damon Motz-Storey; and delving into the moral implications of a federal budget that prioritizes military and nuclear weapons spending over human needs with me. Co-organized with the Oregon Just Transition Alliance, OPAL Environmental Justice Oregon, and Washington PSR, the event brought those who’ve been involved with the anti-nuclear movement for decades together with social justice activists who are new to nuclear issues. It was gratifying to see that participant evaluations indicated that everyone learned something new, and that all who attended were now more likely to take action on nuclear issues. 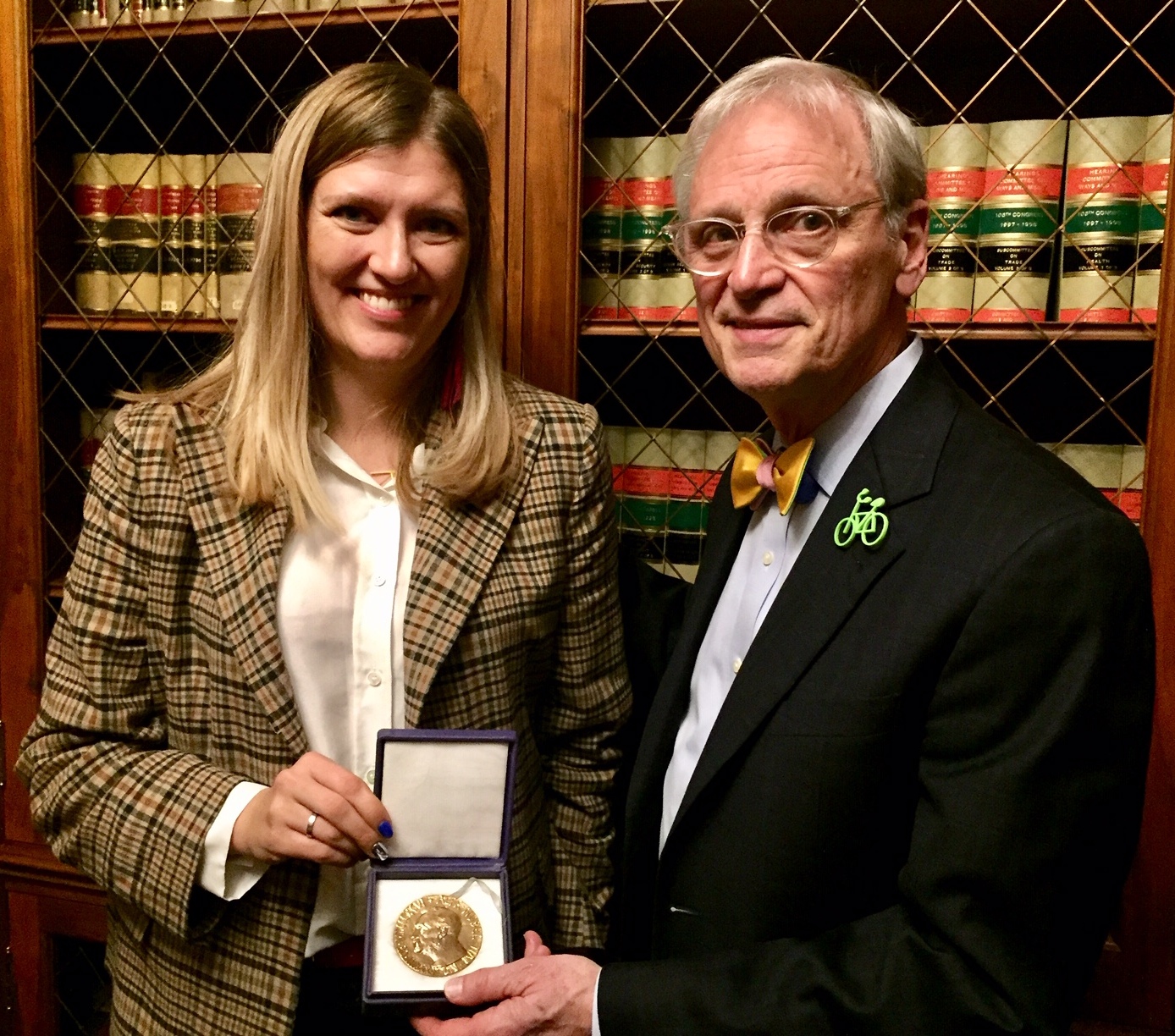 We’re thrilled to share the good news that Oregon’s Representative Earl Blumenauer has, at our request, signed on to ICAN’s ‘Parliamentarian’s Pledge’ to support the Nuclear Ban Treaty, becoming the sixth congressperson in the US to formally support the pledge. Other nuclear-armed states have dozens of parliamentarians taking the pledge, so we have some catching up to do here in the US to respond to ICAN’s call. Take Action: If you are a constituent, be sure to thank Rep. Blumenauer for his leadership. Next up, we’re requesting that Senators Wyden and Merkley, as well as Representatives Bonamici and DeFazio, also sign on, so be sure to encourage them to sign the pledge, as well.

Dr. Tillman Ruff Speaks in Portland, Along with Children Remember

On November 13th of last year, we were pleased to host Co-President of International Physicians for Prevention of Nuclear War (IPPNW) and Co-Founder of the International Campaign to Abolish Nuclear Weapons (ICAN), Dr. Tillman Ruff, visiting from Australia, for an event that also featured the evocative Children Remember performance and exhibit developed by local artists Yukiyo Kawano and Chisao Hata. The evening brought together the head and the heart to reflect upon the humanitarian consequences of nuclear war and to offer hope for a nuclear-free future through the Nuclear Ban Treaty that ICAN successfully brought to the United Nations, and for which they won the 2018 Nobel Peace Prize. Attracting about 75 attendees, the event was cosponsored by WorldOregon and the Jubitz Family Foundation’s War Prevention Initiative.

Dr. Ira Helfand to Speak in Portland on April 9th

Dr. Ira Helfand, Co-President of IPPNW and a Board Member of National Physicians for Social Responsibility, will give a presentation titled The Growing Danger of Nuclear War: What Can Health Professionals Do About It? in Portland on Tuesday, April 9th from 8:30 until 9:30 AM at OHSU’s Marquam Hill Campus. He will also be speaking at Lewis and Clark College on the evening of April 10th.

Save the Date: August 6th Hiroshima and Nagasaki Commemoration

We have begun to plan for the 2019 Portland-area Hiroshima and Nagasaki memorial event. Please mark your calendar and plan to join us on Tuesday, August 6th at the Japanese American Historical Plaza on the Portland Waterfront to remember the victims of the US atomic bombing of these two Japanese cities and to take action for a nuclear-free future.

In addition to our foundational work on nuclear weapons, Oregon PSR’s Peace Program takes a broad and intersectional view of peace as a health issue, encompassing gun violence prevention, racial justice, immigrant and refugee rights, anti-militarism, and more. Other recent highlights of our work include participating in the coalition that successfully convinced Portland’s City Council to withdraw from the Joint Terrorism Task Force, co-sponsoring an outstanding event on Demilitarizing the Pacific, and, of course, our annual Greenfield Peace Writing Scholarship, which this year focuses on racial justice. If you are interested in getting more involved in our peace work, please contact me at [email protected].