Thanks for Celebrating the Nuclear Ban's Entry Into Force With Us! 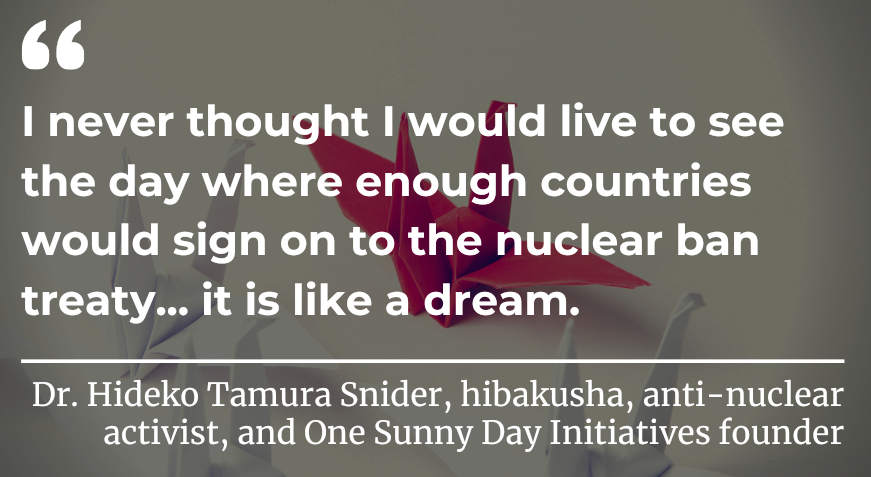 On January 22nd, 2021 the Treaty on the Prohibition of Nuclear Weapons entered into force and became international law. With the entry into force of this groundbreaking treaty, nuclear weapons are now illegal under international law. Our sincere appreciation to everyone who joined us and our partners at Washington PSR on January 21st for an online celebration to mark the Treaty’s entry into force and explore how it advances nuclear justice. It was so inspiring to celebrate this watershed moment for the nuclear justice movement with you, share a celebratory toast, hear from a few speakers working for nuclear justice, and connect with each other and celebrate together.

View video of our online celebration.

January 22nd, 2021 marked an historic milestone for this landmark treaty. Prior to its adoption, nuclear weapons were the only weapons of mass destruction not banned under international law, despite their catastrophic humanitarian consequences. Now, with the Treaty’s entry into force on January 22nd, we can call nuclear weapons what they are: prohibited weapons of mass destruction, just like chemical weapons and biological weapons.

This is the first nuclear weapons treaty to call out the disproportionate impacts of nuclear weapons on Indigenous people and women and to address the need for survivors assistance and environmental remediation, and it provides a legal framework for lasting nuclear disarmament.

The US is not yet a signatory to the Treaty, and instead of joining with the majority of countries in the world in support, it is doing its best to undermine it, so we have more work to do here to follow the lead of countries in Latin America, Africa, and elsewhere that have helped negotiate this landmark treaty.

Please continue reading to learn more about the nuclear ban treaty, upcoming events and opportunities to take action, and the movement for nuclear justice.

Thanks again for joining us in celebrating the nuclear ban’s entry into force! We will continue to strive for true and lasting nuclear disarmament and nuclear justice, and we hope that you will join us in this important work.